[Episcopal News Service] Hundreds of Episcopalians have signed up for a webinar series based on The Episcopal Church’s Becoming Beloved Community framework as the recent nationwide protests over racial injustice drive a surge of interest in the church’s racial reconciliation work.

The three-webinar series, “Becoming Beloved Community NOW,” will be held July 28-30 and is intended to connect church leaders who already are engaged in racial healing initiatives with fellow ministry leaders and other Episcopalians who may be just starting on that journey. The sessions also will emphasize turning interest into action.

Becoming Beloved Community has been the church’s cornerstone racial reconciliation initiative for the past three years, but this series is “very much connected to this emergent moment that we are currently in,” said the Rev. Edwin Johnson, who chairs the church committee that led the webinar planning.

The Black Lives Matter movement has gained energy and support since the May 25 killing of George Floyd, a Black man, by police in Minneapolis, Minnesota, and Episcopalians are joining other Americans in condemning systemic racism, seen as the root of police brutality and other violence toward people of color in the country. “There are people willing to have these conversations. There are people willing to do this work,” Johnson told Episcopal News Service. “We really need to be able to focus … and lift up, what does it mean to be doing this work right now?”

More than 400 people have signed up for the first webinar alone, Johnson said, and interest in the other two has been strong as well. Each two-hour session, from 4-6 p.m. EDT, will focus on a different facet of Becoming Beloved Community.

Presiding Bishop Michael Curry and the Rev. Gay Clark Jennings, president of the House of Deputies, are expected to participate in the sessions, along with churchwide staff members and local Episcopal leaders, who will share stories of their experiences developing ministries aimed at promoting racial healing.

The Rev. Shaneequa Brokenleg, the church’s staff officer for racial reconciliation, told ENS she sees this as an opportunity for the church and its members to get closer to “right relationship” with God, the world and their neighbors, especially people of color.

“Our church, many times, is a reflection of what’s going on in society,” Brokenleg said. “Now’s the time to step forward and say something.”

She is encouraged by how many people from inside and outside the church have responded to the killing of Floyd and other African Americans by asking what they can do to change the system. “That’s a great first step,” she said, and the upcoming webinars are intended to help them take the next steps.

“I’m really hoping that it helps to catalyze us as a church to the work we need to do,” she said.

The Episcopal Church, with a membership estimated to be 90% white, has taken deliberate steps over the past 15 years to confront its own historic complicity in slavery, segregation and other racist systems, and to encourage racial healing.

In 2015, the church’s General Convention took the additional step of identifying racial reconciliation as one of its core priorities, along with evangelism and care of creation. That year, the church also elected Curry as its first African American presiding bishop. 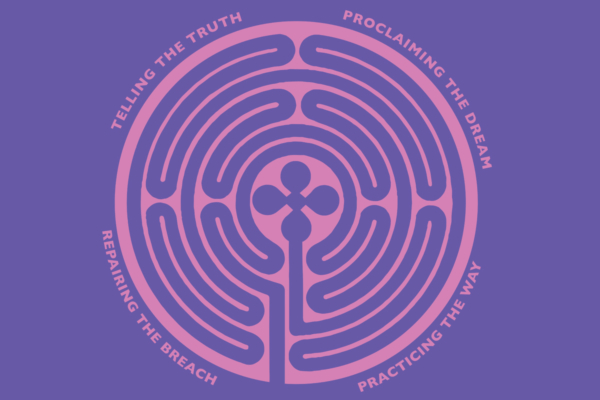 The labyrinth diagram showing the four parts of The Episcopal Church’s Becoming Beloved Community is colored for an Advent mailing.

The church launched Becoming Beloved Community in 2017 as a resource to assist dioceses and congregations in focusing and strengthening their racial reconciliation work. The framework is broken into four parts that are illustrated as a labyrinth: telling the truth about our churches and race, proclaiming the dream of Beloved Community, practicing the way of love in the pattern of Jesus and repairing the breach in society.

Early this year, church leaders had high expectations for the first Becoming Beloved Community Conference, to be held May 5-7, 2020, in Minneapolis, where people engaged with all aspects of the church’s racial reconciliation work would gather to offer support and share best practices. That event, however, like all other church conferences, was derailed by the onset of the coronavirus pandemic in March.

Johnson, who serves as rector of St. Mary’s Episcopal Church in the Dorchester neighborhood of Boston, Massachusetts, is chair of the Presiding Officers’ Advisory Group on Beloved Community Implementation. In lieu of the Minneapolis conference, the committee organized a scaled-down Zoom session May 7 that drew at least 165 participants, Johnson said. The committee continues to focus on online opportunities at a time when most Episcopalians have been refraining from in-person gatherings, including worship services, to slow the spread of the virus.

At the same time, the pandemic has transformed how the church responds to issues of racial injustice. It has made it more difficult to connect with communities of color, within the limits of public health precautions, while also exacerbating inequalities, given the disproportionate effects of the pandemic on those communities.

One way the church reacted was to launch an emergency round of “rapid response” grants. The program, approved by Executive Council in June, will support “groups working specifically to address the racial disparities laid bare by the coronavirus pandemic and for groups working to respond to racist violence and police reform.” The grant application deadline is Aug. 15.

In addition to providing financial support, the Presiding Officers’ Advisory Group hopes its webinars next week will build on the networking efforts that began with its May 7 online gathering, Johnson said, and much has changed in just three months.

That is why the webinars emphasize the “NOW” in “Becoming Beloved Community NOW.”

“I think it’s a really great opportunity to say how, as a church, we can imagine together and create a response right now,” Johnson said.