[Episcopal News Service] The Episcopal Church’s finances are “on pretty solid ground” for 2020 despite the economic downturn caused by the coronavirus pandemic, church leaders said July 22 during an online meeting of Executive Council, the church’s governing body between meetings of General Convention.

Most of the brisk hourlong meeting on Zoom focused on financial updates since Executive Council’s lengthier and wider-ranging meeting June 8-11. And with church leaders trimming an additional $129,000 from the budget over the past month for a total cost savings of $3.6 million this year, their analysis was mostly upbeat.

“No surprises. Unexceptional,” said Kurt Barnes, The Episcopal Church’s chief financial officer. “Those are words that most people want to hear in a financial report.” Dioceses have been paying their assessments at nearly the same rate as before the pandemic, Barnes said, and church trust funds have rebounded from investment losses in the spring.

So far, only the Diocese of Mississippi has indicated it may have to reduce its assessment payments, said the Rev. Mally Lloyd, who chairs Executive Council’s Finance Committee. Other dioceses may apply for waivers by the end of the year.

“We’re on pretty solid ground still halfway through the fiscal year,” Lloyd told her fellow Executive Council members. Since the June session, the Finance Committee has met four times to discuss the option of approving spending reductions that would be triggered by income losses, but that likely won’t be necessary this year, Lloyd said.

Several factors are working in the church’s favor. The Domestic and Foreign Missionary Society, the church’s legal and corporate entity, received a $3 million federal stimulus loan from the Paycheck Protection Program. At the same time, the pandemic forced cuts to various church expenses, like staff travel and conference attendance, helping church staff achieve about $3.5 million in savings, more than offsetting a $1.8 million deficit originally budgeted for 2020.

The church has more than $5 million in cash, Lloyd said, as well as $12 million in short-term reserves. Of those reserves, about $9.5 million is set aside for “the rainiest of rainy days.” 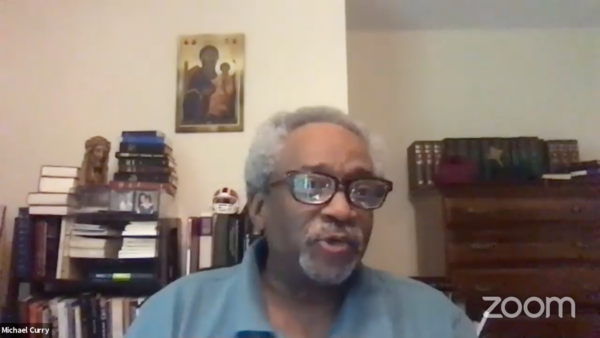 Executive Council typically meets in person three times a year, with a goal this triennium of gathering at least once in each of the church’s nine provinces, most recently in February in Salt Lake City, Utah. That plan was upended in March with the initial surge in cases of COVID-19, the disease caused by the coronavirus. Since then, Executive Council has met online about once a month.

Much of last month’s meeting was devoted to expanding and strengthening the church’s racial reconciliation work after the killing of George Floyd, a Black man, at the hands of police in Minneapolis, Minnesota, and the subsequent protests against racism and police brutality.

Presiding Bishop Michael Curry, in his comments to Executive Council on July 22, lamented this time of heightened anxiety, as the coronavirus pandemic and racial injustice collide with an American political divide that has only worsened in recent years. Add the upcoming U.S. presidential election to the mix and it is like throwing gasoline on a fire, he said.

“The tensions and the divisions are real and they’re deep, but we need not fall victim to them,” Curry said. “We will need to be praying and we’ll need to be speaking, to make it a Christian voice for the way of love and justice and compassion and human decency and adult behavior as values and norms by which we live as human beings. … I’m not talking about how people vote; that’s not the point. I’m talking about how we live together.”

Curry also noted that the Lambeth Conference of bishops from across the Anglican Communion was postponed until 2022 because of the pandemic. The Episcopal Church’s House of Bishops has scheduled a two-day online meeting next week on the theme “Communion, Divine and Human” featuring parallel discussions on racial reconciliation and celebrating Holy Eucharist at a time when most congregations aren’t worshipping in person.

“Those have been two concerns that the church and our bishops have been wrestling with and facing in a variety of ways,” Curry said. The House of Bishops will meet again in September, also online.

Executive Council’s next meeting is scheduled for October, when the focus is expected to shift to the church’s 2021 budget.

Curry, as presiding bishop, serves as president of Executive Council, and the vice president is the Rev. Gay Clark Jennings, as president of the House of Deputies. Twenty members of Executive Council – four bishops, four priests or deacons and 12 laypeople – are elected by General Convention to six-year terms, with half of those members elected every three years. Each of The Episcopal Church’s nine provinces elects an ordained member and a lay member for six years, and those elections also alternate every three years. 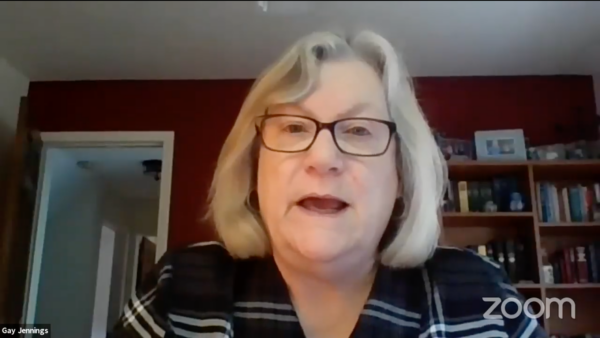 The Rev. Gay Clark Jennings, president of the House of Deputies, gives an update to Executive Council during its July 22 Zoom meeting.

Jennings, in her comments July 22, offered some updates from the House of Deputies, including the deputies’ recent webinar featuring Pete Buttigieg, the former mayor of South Bend, Indiana. As a candidate for this year’s Democratic presidential nomination, Buttigieg was “the only Episcopalian in the entire church that has received more media attention than our presiding bishop,” Jennings said.

At least two more webinars are planned for deputies this year, Jennings said. In September, House of Deputies Vice President Byron Rushing will moderate a discussion with Indianapolis Bishop Jennifer Baskerville-Burrows and Missouri Bishop Deon Johnson. And in November, the deputies will welcome Scott MacDougall, a professor at Church Divinity School of the Pacific in Berkeley, California, whom Jennings described as a scholar of the theological foundations of church governance.