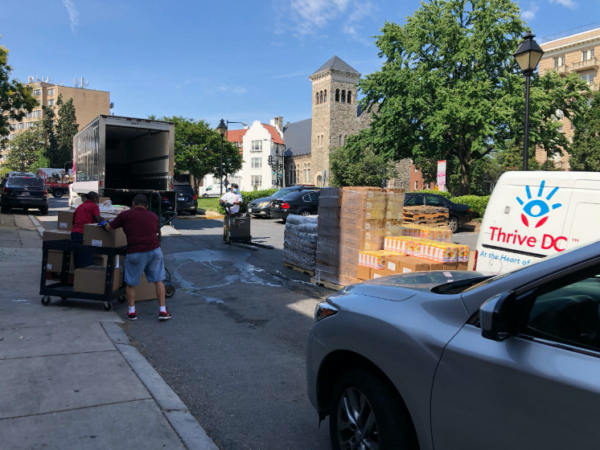 St. Stephen and the Incarnation Episcopal Church in Washington, D.C., receives a shipment of food in its parking lot. Courtesy photo

[St. Stephen and the Incarnation Episcopal Church — Washington, D.C.] Owing to the COVID-19 pandemic, at St. Stephen and the Incarnation Episcopal Church, the Sunday Eucharist, coffee hour, classes, meetings and even the weekend Loaves and Fishes sit-down meals are on furlough. That doesn’t mean the church is empty, though. The dining room, where Loaves and Fishes and Thrive DC once served meals, and the nave of the church, where prayers and sacred song and incense arose, are filled with box after box of food.

St. Stephen’s has become a different kind of sacred space: a food warehouse for people striving to feed themselves and their families.

When the pandemic hit the United States in early March, four organizations with relationships to St. Stephen’s — Thrive DC, We Are Family, Sanctuary DMV, and its own Loaves and Fishes ministry — swiftly pivoted their activities to meet the immediate needs of their neighbors.

Thrive DC served 60 people who needed groceries at its regular Thursday food pantry in mid-March, said executive director Alicia Horton. One week later, the agency encountered more than 200 needing grocery assistance. That was only the beginning.

“We strategized with our food suppliers and devised a plan to increase our purchases to include enough for immigrant families in crisis, our own community of clients that kept growing and other vulnerable groups — for instance, returning citizens: men and women coming out of prison in the midst of the pandemic,” said Horton.

“Since March 23, we have provided groceries and emergency supplies to over 3,000 men, women and children in the Washington, D.C., area,” Horton said. “Over the last 12 weeks we have distributed well over 70,000 pounds of groceries.”

Some of that Thrive food was shared with volunteers of Sanctuary DMV, an all-volunteer collective that “stands in solidarity with immigrants and other marginalized communities,” in the words of volunteer Sandra Moore. Before the pandemic hit, a principal activity of Sanctuary DMV volunteers was accompanying immigrants to Immigration and Customs Enforcement hearings, but providing food soon became the top priority.

“An informal effort to serve 200 individuals exploded to a waiting list of 1,200 families in a little over a week,” Moore said. “St. Stephen’s now is the launch pad for ‘pop-up pantries’ that provide food and essentials (diapers, formula, sanitary products, medicines) to last a family two weeks. Every Saturday we use the St. Stephen’s nave to distribute 75 boxes of nonperishables donated by Thrive DC and produce from DC Central Kitchen to volunteers from La Unidad Latina fraternity, who make deliveries to families in the hardest-hit areas.” Sanctuary DMV Food Justice seeks to create mutuality and offer leadership and volunteer opportunities for impacted families so that they are participants and agents of their own freedom. In the three months since it started, Sanctuary DMV Food Justice has provided food and essentials to more than 15,000 people.

Delivering free bags of groceries to senior citizens, many of them frail and lonely, has been a major element of the mission of We Are Family since its beginning, but COVID-19 increased the need for volunteers. Old people who left their homes only occasionally now preferred not to go out at all.

“When St. Stephen’s church building closed, We Are Family first moved its operation outside onto the grounds of St. Stephen’s, assembling grocery bags that also contained coronavirus safety information and coordinating delivery to over 750 seniors in their own homes in March,” said Mark Andersen, co-executive director of the agency. From that point, WAF’s efforts grew steadily more complex, with volunteers regularly calling senior citizens on the agency’s lists, checking on their well-being and taking and filling grocery orders. By June, the number of households WAF was helping had grown to more than 900.

“We began to use the church sanctuary to warehouse emergency supplies of food as well as hard-to-get but essential items like toilet paper, paper towels, masks, gloves and hand sanitizer,” Andersen said. “The flow of food and other supplies in and out of the church building was constant and bustling, helping to meet our seniors’ basic human needs, thus making it practically possible for them to stay safe indoors.”