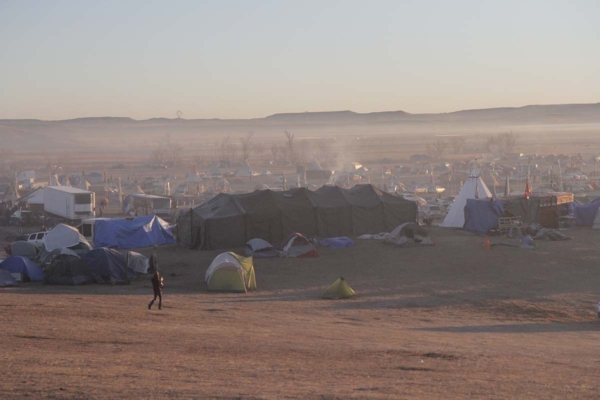 The sun rises over Oceti Sakowin Camp just north of the Cannonball River where opponents of the Dakota Access Pipeline stayed during the 2016 protests. In solidarity with the Standing Rock Sioux, the protests brought together Native tribes in an unprecedented show of unity that resurrected the Indigenous rights movement in the United States. Photo: Lynette Wilson/Episcopal News Service

[Episcopal News Service] In early 2019, as an editorial committee began working on a new Lakota translation of the Book of Common Prayer, two of its members died “right off the bat.” They were Indigenous elders whose language fluency had uniquely qualified them for the task, the Ven. Paul Sneve, who coordinates the project funded by a United Thank Offering grant in 2018, told Episcopal News Service in May.

The loss hurt Sneve both personally and culturally: Losing two elders in short order was a reminder that time is a critical factor in saving Native languages, stories and customs. Then, about a year later, the coronavirus began disproportionately affecting Native Americans, putting elders at particular risk. The pandemic is “scaring us to death,” said Sneve, who also serves the Diocese of South Dakota as archdeacon. “We’re terrified of losing [our elders]. And our tribes are very aware of it.”

Translating the Book of Common Prayer into Indigenous languages is just one way that The Episcopal Church, through Indigenous ministries, partners with Native Americans to preserve languages and rituals. The coronavirus has added new urgency to this work, as Indigenous leaders consider what knowledge and traditions could be lost. At the same time, they see hope in young people who are connecting with their heritage in ways that previous generations haven’t.

The Lakota and Dakota of Standing Rock and the Navajo are three of more than 560 Indigenous tribes, including those in Alaska, recognized by the United States Department of the Interior. Each tribe has its own culture and language, the Rev. Bradley Hauff, The Episcopal Church’s missioner for Indigenous ministries, told ENS. He likens Native North American tribes to European countries and people; instead of Norwegians, Greeks and Slovenians, there are the Shoshone, Nez Pierce, Ute, Northern Paiute, Tlingit and hundreds of others. According to the 2010 census, of 5.2 million Native Americans, one-third live on 326 reservations. The other 70%, the Indigenous diaspora, live elsewhere.

Most Indigenous people aren’t fluent in a tribal language. According to a 2011 American Community Survey Brief, roughly 372,000 people speak Native North American languages. Babbel magazine reported in 2017 that 175 such languages are spoken and that, “without restoration efforts, there will be at most 20 still spoken in 2050.” Sneve knew whom to recruit for the translation project: “Our fluent speakers are elders.”

Hauff noted that many Episcopal churches with Indigenous members use a translated Book of Common Prayer, sing translated hymns, and incorporate Native rituals and spirituality into worship. The Diocese of the Rio Grande formed a group for a translation project in the Episcopal Church in Navajoland, an Episcopal Area Mission that serves the Navajo Nation. “They never had enough time to get together” before the pandemic, said the Rev. Cathlena Plummer, priest in charge and canon for spiritual formation at Navajoland’s Good Shepherd Mission in Fort Defiance, Arizona.

The Book of Common Prayer is already translated into Gwich’in (spoken in northeast parts of Alaska) and Lakota, and the new Lakota translation project is focused on updating the book’s 1928 and 1979 predecessors. “We’re hoping to use a more contemporary Lakota” and to include the less common Dakota and Nakota dialects, said Sneve, whose mother was Sicangu Lakota and his father was of Norwegian descent. Growing up, he learned Dakota through Episcopal liturgical materials, but “conversational Lakota is a real struggle,” he said; Lakota wasn’t spoken in his family’s home.

The Episcopal Church’s efforts to preserve Indigenous languages are part of a complex, conflicted relationship between the church and Native people that dates back to Jamestown, Hauff said. This is partly because the church was one Christian denomination that operated Indian boarding schools first established in the late 19th century to assimilate Indigenous children into white culture. “That is a painful part of our shared history,” Hauff said. “It has not been a perfect relationship.”

When he was very young, Moore spent every day with his grandmother. “I always said that my grandmother was my mom,” said Moore, whose father was a single dad. For her part, Moore’s grandmother would tell her young grandson that he was taking care of her. Originally from the Fort Belknap Indian Community in Montana, Moore now lives in North Dakota on the Standing Rock Sioux Reservation. His family is from the Nez Perce, Blackfoot, Assiniboine, Dakota and Lakota tribes, and his dad’s mom “taught me how to pray, about the ways of God,” and to be respectful and polite, said Moore, now 21 and a music education major at Bismarck State College. When that grandmother died, his maternal grandmother took over. From her, he learned how to have fun. Along the way, both grandmothers shared their Indigenous values, setting standards for him.

Moore’s grandmothers both died before the novel coronavirus. But they, like other Indigenous elders, offered a link to Native American languages, stories, customs and spirituality.

Forrest Cuch, a member of the Ute tribe, former director of the Utah Division of Indian Affairs and a senior bishop’s warden at St. Elizabeth’s Church in Whiterocks, Utah, sees the coronavirus as just the latest front of Indigenous elder loss. “We have been losing our cultures and our elders for the last 50 years,” he said. Cuch stressed that not every elder imparts shared history and culture. To think so simplifies the complexities of people’s lives and the issues facing Native communities, while presenting a homogenized, romanticized view of older Native Americans.

Cuch and Sneve are hopeful that Moore and other young Indigenous people are committed to learning their people’s real history and culture. “The young people that are coming into the world, they’re very intelligent and quite gifted,” Cuch said; they’re clued in to genocide and whitewashed educational narratives, which have downplayed the damage inflicted on Native Americans. “They have to go through the process of dealing with the trauma,” he said. “It’s a very treacherous journey out there.”

Hauff took a more nuanced view of Indigenous youth. “They are growing up in a world that is very different from the world of my parents,” he said. Decades ago, Native languages and traditions were “being discouraged and assimilation was encouraged,” he said. “But many of our youth have challenges — disengaged parents, negative gang influences, substance abuse, domestic abuse and mental health issues reflected by an alarmingly high suicide rate.”

The inequities currently at play are legacies of the genocide that white European settlers and their descendants perpetrated on Indigenous people. By the late 19th century, the Native American population had diminished from upwards of 15 million in the mid-1400s to 238,000. Along the way, forced relocation disrupted Indigenous cultures, making them harder to sustain, even as the Indigenous population gradually grew to more than five million. “Our entire genetic makeup has had to adapt,” said Warren Hawk, a member of the Lakota and Dakota nations who lives on the Standing Rock Sioux Reservation. “Should this pandemic infiltrate itself [into our communities] … I think our death rate would be devastating.”

“We’ve lost a lot of elders just reservation-wide, and it’s a great loss, a tremendous loss,” Plummer of Good Shepherd Mission said. During the pandemic, as she and the Rev. Leon Sampson delivered groceries to Navajo elders, they noticed families becoming more protective of their grandparents and great-grandparents. In the Navajo tradition, elders with the family’s teachings are known as “pot carriers,” she said; they carry the history and meaning of their clans, told through story. “Some of them have passed on not sharing the story, not sharing what they knew about their clan because it’s not written down. No one knew this was going to happen, and no one knew that we should be writing our story as we live,” Plummer said.

Elders also keep track of who’s related. Sneve notes that without that institutional knowledge, no one will ensure that “you don’t accidentally marry your cousin.” And Hawk recalls his parents and grandparents teaching him Lakota values. “Everything is sort of a teachable and learning environment for us, and so that is what is held by our elders,” he said. He learned that everything is connected and has meaning and purpose — and he sees younger people balancing those values with the broader world. Hawk, who is councilman-at-large of the Standing Rock Sioux Tribe and chairman of the Standing Rock Mission Council, grew up in a bilingual home. When he and his siblings went to school, though, their parents spoke English to them. Today, at age 58, he’s trying to relearn his parents’ language. Hawk mentioned that now there is an immersion language program at Standing Rock.

Moore took Lakota classes in high school. “The schools here consider our language a foreign language,” he said wryly. Many interviewed for this article expressed optimism that education (rather than just at-home learning) is critical for Indigenous languages. There are preschool immersion programs, and the University of Nevada, Reno, offered its first Northern Paiute language class last fall. Sneve points to tribal universities as a particularly rich resource. “Our tribal universities are enabling the resurgence of the language, the resurgence of spirituality, the older traditional ways,” he said, highlighting the Lakota language and spirituality classes at Sinte Gleska University on Rosebud Reservation in South Dakota. “They are, in many ways, becoming kind of a clearinghouse of elder wisdom and information because they use the elders to teach classes.”

Moore and others emerged from the Dakota Access Pipeline protests steeped in their Indigenous identity. “With that fight, out came people speaking their language, going to their ceremonies, knowing their stories, praying in their language … getting more in touch with mother earth,” he said. But Moore has two groups of friends: those moving away from traditional Indigenous values and others striving to maintain them. “I’m the middle way for those two schools of people,” he said.

Moore aims for balance, yet feels responsible for the Lakota way. “The way I see it is, if we’re going to lose some of our tradition or all of it, it’s going to be my fault. It’s not going to be the fault of losing elders. It’s going to be my fault … and my peers’ and my generation’s fault because we didn’t seek that knowledge,” he said. “Because it’s always there. I know at least five different men that I can go to for cultural teachings. And it’s my fault if I didn’t go to them and learn those things from them.”

As states and tribes calibrate reopening and their response to the coronavirus, it’s impossible to know if another tribe could experience the same degree of loss as the Navajo Nation. Or how much cultural wisdom tribes will lose because of the pandemic — or will eventually lose with time.

It won’t be everyone or everything, though, Sneve noted. “We’ve survived smallpox, influenza epidemics, you know, we’re surviving diabetes. We’re going to be OK. We’re going to lose some important people. It’s going to happen,” he said. “How we look at time is very different than a Western European way, so when someone dies, they’re not gone forever. We can still communicate with them, and they can come back and visit us. So even though we may lose their physical body, we know they’re not gone forever and they can still communicate with us if they need to. So we’re optimistic, as much as we can be.”