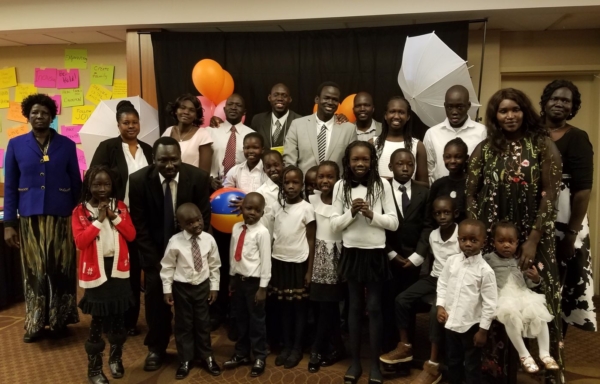 [Episcopal News Service] Forced to flee a devastating civil war in their native country and endure the limbo of refugee camps, a group of South Sudanese Anglicans has found a home in the Episcopal Diocese of Central New York. With the help of the diocese and a local nonprofit, they are putting down roots in the Syracuse area, connecting with their neighbors and breathing new life into the diocese.

Diangdit Chapel is a congregation started by refugees from South Sudan that now shares space with Emmanuel Episcopal Church in East Syracuse. Its members – including some of the “Lost Boys of Sudan” who walked over a thousand miles to refugee camps in other African countries – worship in their native language, Dinka. They are among the millions of people who fled Sudan from the 1980s through the 2000s during a protracted civil war that involved mass killings, religious persecution, famine and widespread sexual violence and kidnappings.

Refugees who settled in Syracuse formed the congregation now known as Diangdit – a Dinka word that translates to “trinity” – about 15 years ago, said Central New York Bishop DeDe Duncan-Probe. They initially worshipped as a solitary outpost of their home church, the Episcopal Church of Sudan, an Anglican Communion province that was split in two after the 2011 secession of South Sudan. In 2018, Diangdit began a period of canonical transition into The Episcopal Church, and at Central New York’s diocesan convention in November 2019, Diangdit officially became a mission chapel of the diocese.

“There was hardly a dry eye” that day, Duncan-Probe told Episcopal News Service. “They’re beloved in this diocese and it was very moving. … Some of them have been on a 15-, 20-year journey, trying to find home, and for them to finally come home in a real way in this diocese was just palpable.” 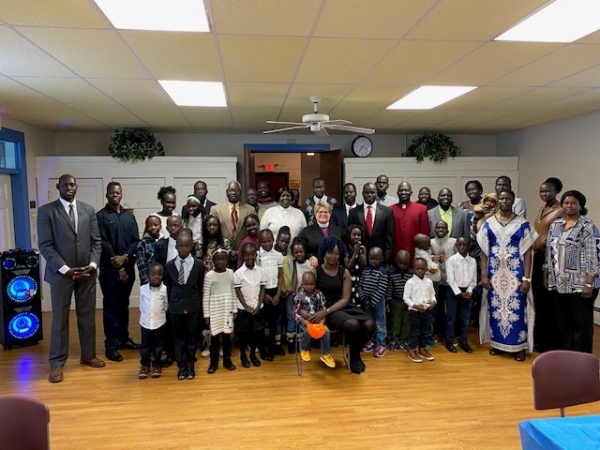 Mission chapel status means that the diocese provides financial assistance and other forms of support to the congregation.

“The hope is that they will be a [mission] chapel while they continue to develop and grow and become stronger, and then at some point will become a sustaining parish in their own right,” Duncan-Probe said.

The congregation is served by the Rev. Amuor Mac Garang, who was ordained in Sudan. She was with some of members of the congregation in refugee camps, Duncan-Probe said.

“She was a spiritual, maternal leader – a cultural leader – and then the bishop in the Sudan ordained her to be their spiritual leader.”

The congregation’s integration into the community has been facilitated by a project called Building United Communities, a partnership between the diocese and InterFaith Works, which is a local affiliate of Episcopal Migration Ministries. It originated after Diangdit ran into some problems with the church they were previously meeting in – conflicts over space usage that were exacerbated by cultural and linguistic barriers – and Duncan-Probe wanted to “start over and say, ‘OK, how can we build a better working relationship between the new Americans and the existing congregations?’”

The congregation moved to Emmanuel Episcopal Church in East Syracuse in the fall of 2018. Duncan-Probe approached Beth Broadway, president and CEO of InterFaith Works, about developing a structure that built on the organization’s decades of experience integrating refugees into communities and working across cultural boundaries. With programs focused on conflict resolution, interfaith dialogue and refugee orientation, InterFaith Works was uniquely qualified for the task.

“Different worship practices, different languages, misunderstandings, a desire to use the physical space of the church at the same time – how does that all get negotiated out? It’s kind of like a marriage; how do you live together?” Broadway told ENS.

InterFaith Works and the diocese applied for a United Thank Offering grant to put the Building United Communities program into action. It involves a series of facilitated community discussions designed to bridge cultural divides, solve problems and foster lasting relationships.

Diangdit had been holding its own services at Emmanuel for about a year when the Building United Communities program started bringing the two congregations together, and although they were on good terms, the two groups “really didn’t know each other that well,” Broadway said.

After a few facilitated discussions – separately and together – the two congregations started to bond. Before COVID-19, they were holding quarterly joint worship services, and they decorated the church for Christmas together.

“Things are really moving, and they really want each other,” Broadway said. “It’s quite lovely.”

As an aging parish with about 25 congregants, Emmanuel has been especially welcoming to Diangdit, appreciating the energy they bring to the church, Broadway said.

“There are no children and families there,” Broadway told ENS. “Many of the Emmanuel people were saying, ‘We sorrow for our church. It might not be here [in the future] and we see this chapel as the future of our church.’”

The Sudanese-Americans are also shaping the future of their new hometown. Chol Majok, a lay leader at Diangdit and one of the former “Lost Boys of Sudan,” became the first refugee elected to Syracuse’s city council in December 2019. Majok left his home in what is now South Sudan when he was 6 years old, walking hundreds of miles, eventually ending up at a refugee camp in Kenya. He arrived in Syracuse in 2001, and despite the violence and hardships he endured as a child, he was appalled at the city’s widespread poverty. Determined to do something about it, he began working in the mayor’s office and launched a successful career in politics and community development.

“The spirit of faith, courage and hope that has helped me out of bombs, starvation, refugee camps and orphan life is the same fighting spirit I will share with you,” he told his constituents when he was sworn in.

Duncan-Probe finds inspiration in the perseverance and enterprising spirit of Majok and his fellow congregants.

“These are folks who are so faithful and inspiring. When I’m around them, I always come away feeling inspired. And they have a lot to teach Americans about faithfulness and hard times because they’ve certainly been through some of the hardest times,” she told ENS.

“There’s great hope that we’ll learn something here together that can be transferable to other contexts – how to be different from each other and be united in ministry, how to not speak the same language or have the same context of reference at all, and yet, how to be faithful together loving God.”