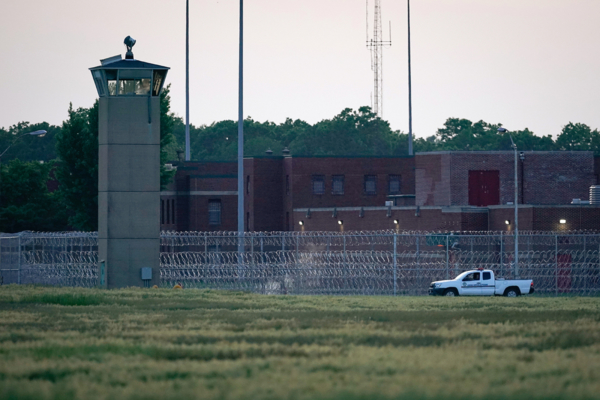 A corrections vehicle patrols near the Federal Correctional Complex in Terre Haute, Indiana, in May. Photo: Reuters

[Episcopal News Service] The U.S. government on July 14 executed an inmate for the first time since 2003. Two more executions are scheduled this week at the federal prison in Terre Haute, Indiana, that holds the government’s 60 male death row inmates. A fourth execution is set for August.

The Justice Department is carrying out a plan it announced last year to end a moratorium on capital punishment for inmates who have been sentenced to death for murder under federal criminal law. The abrupt resumption of those executions this week was condemned by Episcopal leaders in Indiana, reflecting The Episcopal Church’s decades of opposition to the death penalty.

“It’s just a horrific thing,” Indianapolis Bishop Jennifer Baskerville-Burrows told Episcopal News Service in an interview, adding that she supports calls for abolishing capital punishment in the United States. “The death penalty is abhorrent to God, I believe.”

Her diocese includes Terre Haute, where members of St. Stephen’s Episcopal Church have been active in past efforts to end the death penalty. The Rev. Drew Downs, rector at St. Stephen’s, said his congregation had braced for the resumption of federal executions when they were originally scheduled for December 2019. Long-time parishioners still have vivid memories of the frenzy in 2001 when Oklahoma City bomber Timothy McVeigh was executed there.

The December execution dates, however, were delayed by court challenges. On June 29, the primary legal barrier was removed when the U.S. Supreme Court declined to hear an appeal of a lower court ruling that the Trump administration could proceed with the executions.

“Our congregation has been surprised and taken aback by it,” Downs told ENS on July 15. “I know when news hit when they were delayed from December, we all took a sigh of relief and put it on the back burner.” Since then, the onset of the coronavirus pandemic has shifted much of his focus to maintaining contact with parishioners from a distance and stepping up online worship offerings.

A local anti-death penalty group organized a vigil in Terre Haute on July 14 after the execution of Daniel Lewis Lee, and another vigil was scheduled July 15 in response to the impending execution of Wesley Ira Purkey, convicted in 2003 of raping, murdering and dismembering a 16-year-old girl in Missouri. (Purkey was executed July 16.) Though Downs hasn’t been able to attend this week’s vigils, he has participated in past advocacy and remains convinced as a Christian that the death penalty is wrong.

“In the end, the idea that we’re sitting here playing God is not only disturbing, it goes against the very foundation of the Gospel,” he said.

Popular support historically has tilted in favor of keeping the death penalty, though that support has gradually diminished over the past 25 years. During that time, a growing number of states have outlawed or suspended executions in response to a range of concerns about the practice that have been raised by The Episcopal Church and other critics.

Murder doesn’t justify killing another person by the state on behalf of its citizens, critics say. They also argue that capital punishment is more expensive than life sentences in prison because of the lengthy appeals process. Capital punishment disproportionately affects people of color and those without the economic resources to mount an adequate defense, raising questions of fairness. In some cases, inmates sentenced to death were later exonerated, further fueling calls for abolishment, as has the death penalty’s often arbitrary application, with defendants convicted of similar crimes able to receive different sentences.

The last was one argument cited in defense of Lee, the 47-year-old Oklahoma man who was executed July 14 for the murder of an Arkansas family in 1996. Lee’s accomplice, Chevie Kehoe, was sentenced to life in prison. Prosecutors described Kehoe as the ringleader, who had recruited Lee into a white supremacist organization and targeted the family for burglary in search of money and guns.

Earlene Peterson, whose daughter, son-in-law and granddaughter were killed, had been one of the most prominent voices calling for Lee to be spared for the crime. “Yes, Daniel Lee damaged my life, but I can’t believe taking his life is going to change any of that,” Peterson said in September.

“When a person’s life is at stake, why are we not listening?” McGregor said in an interview with ENS.

McGregor is known for her storytelling ministry with Arkansas death row inmates through the Prison Story Project. She said she was particularly moved by Peterson’s criticisms of the death penalty as disproportionate and unfair. “None of that makes sense to anybody,” she said, “not to those of us who have been working on abolition of the death penalty.”

Federal executions had been on hold for so long partly due to concerns about the effectiveness and availability of the three-drug cocktail used in lethal injections. The Justice Department chose to proceed instead by deploying a single drug, pentobarbital.

“Congress has expressly authorized the death penalty through legislation adopted by the people’s representatives in both houses of Congress and signed by the President,” Barr said in his July 2019 statement announcing the decision. “We owe it to the victims and their families to carry forward the sentence imposed by our justice system.”

While federal executions are rare, states have executed more than 1,500 people since the death penalty was reinstated by the Supreme Court in 1976, according to the Death Penalty Information Center, but the number of annual executions has declined recently, from a high of 98 in 1999 to just 22 last year.

The Episcopal Church’s stance against the death penalty dates to a 1958 General Convention resolution that asserted “taking of such a human life falls within the province of Almighty God and not within the rights of man.” General Convention has occasionally affirmed and expanded on that position, most recently in 2018.

Northern Indiana Bishop Douglas Sparks, in a written statement to ENS, said he was “saddened and troubled” by the Trump administration’s resumption of federal executions this week.

“The murder of a human person by another human person is abhorrent and deeply painful,” Sparks said. “I grieve the murder of any person and I reach out in pastoral care for those who mourn their deaths. However, it is important to underscore that the United States of America is the only developed nation that continues to believe that state sponsored execution is a deterrent to others who commit violent crimes including murder.”

Sparks noted the church’s long record of opposition to executions and underscored how people of color are given a disproportionate number of death sentences.

“The life and teachings of Jesus remind us again and again that every person is made in God’s image and likeness and that loving God and our neighbor requires us to challenge violence of every kind and to pursue peace and reconciliation,” Sparks said.

The death penalty remains in effect in 28 states, including Indiana, though some states have stayed or postponed executions this year with COVID-19 cases on the rise. Before this week, only seven people had been executed in the United States in 2020, by the states of Texas, Georgia, Alabama and Missouri – and only two people since the World Health Organization declared a pandemic on March 11.

Matthew Ellis, senior warden at St. Paul’s Episcopal Church in Indianapolis and a former executive director of the anti-death penalty Indiana Abolition Coalition, told ENS he thinks the pandemic provided another argument against proceeding with executions, which are “diverting attention and resources” from the nation’s health crisis. But he also cited more fundamental, ethical reasons to halt executions for good.

“We’re called to respect the dignity of every human being, and I think certainly executing people is not consistent with that ethic,” Ellis said. “The Episcopal Church as a whole has continued to express opposition to the death penalty. We are also called to work against unjust systems. The death penalty is incredibly unjust and unfair.”