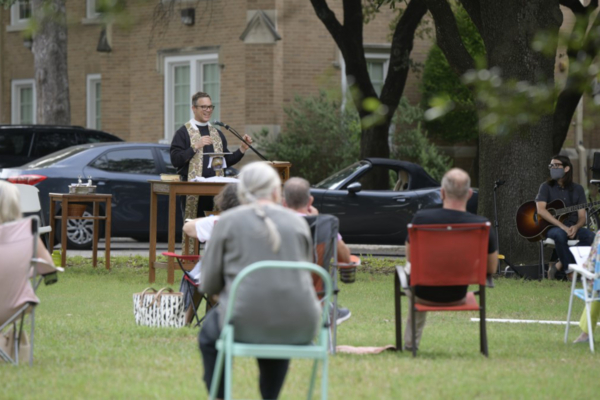 [Episcopal News Service] In a normal year, attending church generally isn’t considered a risky behavior. Add that to the list of norms upended by the coronavirus pandemic.

With COVID-19 cases surging around the United States, few activities pose as much danger as congregating tightly with other people in an enclosed space for an hour or more. And inside a church, scientists say, the danger of virus transmission increases when the congregation starts singing.

Such warnings pose a bleak challenge to Episcopal dioceses and congregations interested in safely resuming some form of in-person worship, but not all worship is equally risky. While continuing to offer infection-proof online services, some congregations also are holding outdoor services, which may carry a lower risk of transmission than indoor services.

The first “Mass on the Grass” was held at St. Matthew’s Cathedral in Dallas, Texas, on May 31. “We went ahead just as soon as we could,” said the Very Rev. Robert Price, dean of the cathedral. Dallas Bishop George Sumner allowed limited resumption of in-person services in the diocese, including outdoor services, starting on Pentecost Sunday.

“There’s a certain amount of relaxation and friendliness that comes in an outdoor setting,” Price told Episcopal News Service.

Several other congregations in the Diocese of Dallas have started offering weekly outdoor services as well, while taking additional health precautions, such as physical distancing, mask requirements and a bread-only Eucharist. The arrangements are similar at other outdoor worship services around the country.

At St. Paul’s Episcopal Church in Riverside, Connecticut, worshippers are invited to sit in one of the circles painted on the church’s meadow to maintain the required 6 feet of separation during “Church on the Grass.” To prevent overcrowding, reservations are required to attend “Worship on the Lawn” at Christ Church in New Bern, North Carolina.

And on the Hawaiian island of Maui, worshippers are encouraged to gather “on the festival lawn” for Sunday services at St. John’s Episcopal Church. Outdoor worship is nothing new on Hawaii’s Big Island, where the “Beach Mass” has long been a popular offering of St. James’ Episcopal Church. The difference now: In addition to his colorful lei, the Rev. David Stout, St. James’ rector, wears a blue surgical mask while leading the service.

In Prosper, Texas, north of Dallas, St. Paul’s Episcopal Church now offers an outdoor service on Sundays at 9 a.m., with most parishioners able to sit in the shade of the church’s portico. “People love it. Families come spread a blanket out with the kids,” the Rev. Tom Smith, the church’s rector, told ENS.

About 100 people have been attending, compared to the 225 who typically attended indoor services before the pandemic. A wooden table from the parish hall, covered with linen, serves as an outdoor altar. The services begin and end with singing, and they are kept short, Smith said.

“You’re only out there for a half-hour, and it’s really good to see everyone,” he said, and for the most part, worshippers have been taking precautions seriously, by wearing masks and refraining from handshakes and hugs.

At St. Matthew’s Cathedral, the “Mass on the Grass” at 8 a.m. Sunday is promoted as a BYO service: Bring your own chair, mask and bug spray.

“We’re in the bugs’ world. We are guests on their lawn,” Price said. Thankfully, the Texas heat isn’t as oppressive under the shade of the cathedral’s oak trees.

Despite the growth of outdoor worship around The Episcopal Church, online services continue to offer the safest alternative to traditional in-person worship. Congregations that have resumed or are planning to resume indoor worship services generally have implemented tight restrictions – attendance limits, handshake bans, mask mandates and cleaning protocols, for example – aimed at preventing a superspreader event, in which one infected worshipper spreads the virus to many others.

The concern is justified, health experts say. Gathering inside a church nearly tops the list of pandemic risks.

The risk isn’t eliminated at smaller religious services. The Michigan news site MLive asked four public health experts to rate the risk level of various public venues on a scale of 1 to 10. Bars and large music concerts were deemed most hazardous, with risk levels of 9. Churches were assessed a risk level of 8, on par with sports stadiums, gyms, amusement parks and buffets.

One of the MLive experts noted that churches have been the sites of some early superspreader events during the pandemic, but that article and the NPR report both noted that taking precautions can help reduce the risk of transmission at church services.

One of the most effective precautions may be to avoid indoor services and gather outside instead. Although scientists are still studying how the coronavirus spreads from person to person, health experts suggest that outdoor activities pose less risk than gathering indoors, due to the ample fresh air and greater ability to stay a safe distance away from others.

Price said celebrating Pentecost together outdoors brought “a little bit of that Easter celebration” to St. Matthew’s Cathedral, after in-person Easter services were canceled earlier in the year. “It was kind of a rising to new life together.”

And apart from the bugs and the Texas heat, congregations in the Diocese of Dallas are finding that outdoor worship is a rewarding experience on its own. Price compared it to a backyard party – though one that follows liturgical traditions.

In the northern Dallas suburb of Richardson, the Church of the Epiphany holds its outdoor service early, at 7 a.m., to beat the heat. The church doesn’t have any shade trees, said the Rev. Betsy Randall, Epiphany’s rector, and “if it’s raining, it’s like a baseball game: called off.”

For Epiphany’s services, worshippers claim one of the purple circles painted on the church’s parking lot. They are required to wear masks and may take pre-consecrated wafers. During the pandemic, the liturgy will always be familiar, Randall told ENS, but “the rest of it is kind of strange right now.”

Other Episcopal congregations have resumed traditions of outdoor worship that predate the pandemic, such as Church of the Woods in Canterbury, New Hampshire. Outdoor worship also is a feature of some homeless street ministries, like Common Cathedral in Boston, Massachusetts, where worshippers have continued to gather on Boston Common for services led by clergy from St. Paul’s Episcopal Cathedral.

Gathering outdoors is a common practice for special occasions, such as pet blessing ceremonies, but some congregations are trying full outdoor worship for the first time. Christ Episcopal Church in Charlottesville, Virginia, tried its first outdoor service on June 28 on a farm outside the city owned by the Rev. Marilu Thomas, the church’s associate rector. More than 100 people attended the service, which lasted a little more than an hour.

“Even with the masks and everything, it was great just to be together,” the Rev. Paul Walker, Christ Church’s rector, told ENS. The congregation continues to worship regularly online but plans to gather again at the farm on Aug. 2. 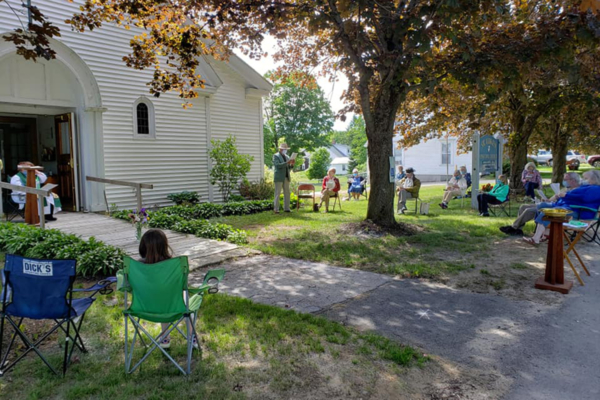 Worshippers at St. Luke’s Episcopal Church in Wilton, Maine, gather in person for the first time in three months for an outdoor worship service in June. “Parishioners brought their own chairs and Rev. Sue Cole presided from just outside the church’s front door,” the Diocese of Maine said in an email newsletter. Photo: Diocese of Maine

And in Bloomfield Hills, Michigan, a northern Detroit suburb, Christ Church Cranbrook invested in a sort of elliptical awning that the Rev. Bill Danaher says “looks like a Pringle.” It now provides additional shade for two weekly outdoor services, held Saturday evenings and Sunday mornings on a triangle of lawn in front of the church. The first outdoor services, on July 4 and 5, drew about 100 people, a good turnout for a summer holiday weekend.

Before the pandemic, the congregation’s in-person Sunday attendance averaged over 500, with that number typically dipping below 400 during the summer. The church is large enough to seat about 900 people inside, Danaher told ENS, so it easily could accommodate small indoor services with space for everyone to keep their distance. “We’re just being careful with having it outdoors,” Danaher said.

Worshipping outside is something of a return to the congregation’s roots. Although the church dates to the 1920s, the congregation began as a tent meeting in 1904 on the campus of the newly founded Cranbrook Educational Community. This year, the congregation added online worship services in response to the pandemic, “but what happens is people still need to be next to each other,” Danaher said. “They still need to congregate, even if it’s 6 feet apart.”