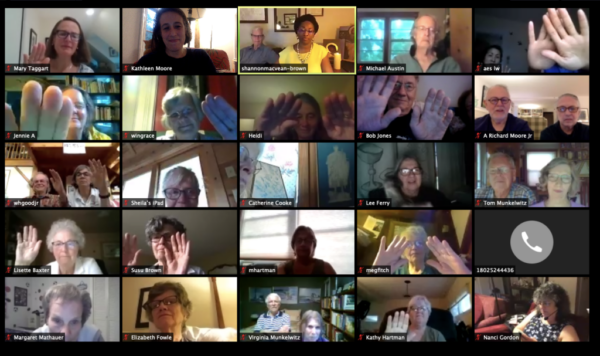 [Diocese of Vermont] On July 7, the 40 or 50 people who had been meeting twice each day for 17 weeks to pray with the bishop of Vermont on Zoom dubbed themselves the Green Mountain Online Abbey, and resolved to carry on without her.

Not that Bishop Shannon MacVean-Brown was going anywhere. Participants would still sometimes see her smiling at them from one of the Hollywood Squares-like boxes on their computer screens from time to time. But she had sensed for several weeks that the online community she had nurtured over the course of the COVID-19 pandemic was ready to continue on its own, and so she relinquished daily liturgical leadership to a newly assembled rota of others.

“I didn’t expect to start a congregation,” MacVean-Brown says. “In an emergency situation you gather and you pray together. I thought well, we can do that. I just wanted to be able to bring people together to remind them—and myself to a certain extent—that we are still the church and we have these things that define who we are, and that can help us remain who we are.

“Within two weeks, though, I thought, ‘This is good. I want to keep this going.’”

Like several dioceses across the Episcopal Church, the Diocese of Vermont began offering online worship on Sundays as the pandemic took hold. This has been especially important in dioceses with small isolated congregations that might not have the resources or broadband access to host worship on their own. Unlike almost any other diocese, after offering her first service on Sunday March 15, the bishop followed up with Morning Prayer at 8 a.m. and Compline at 8 p.m. the following day.

The group hasn’t stopped meeting since. The only deviation in the schedule occurs on Sundays when Morning Prayer with a sermon is held at 11 a.m. As the church’s calendar moved from the middle of Lent to the far side of Pentecost, a community that seldom dips below 40 people coalesced around each service with regular members in Manhattan and New Hampshire and Sunday visitors such as the bishop’s parents in Detroit and a friend of hers in Portugal.

The gathering met a need enhanced by the pandemic, but with deeper roots, participants say. “Everything was falling away, but here was an opportunity to pray, and it just immediately grounded us,” says Wendy Buhner of St. Martin’s Church in Fairlee, who attends services with her husband, Chris, from their farm in Newberry. “Living in Vermont, you often have to drive a great distance to be with people. To be able to turn on your computer and see people and say these prayers, it has been profound. My spirit misses it when I don’t show up.”

The bishop’s decision to use Zoom rather than Facebook Live as the platform for services has proven essential to the community’s development because participants can see one another, interact on occasion, and access the service by telephone, even if they lack cellular service or an internet connection.

“As much as some people pooh-pooh and shy away from Zoom as though it is not good enough, well if that is all we have we have to make it good enough,” MacVean-Brown says. “For us, it has been really life giving because it gives us a chance to pray together and share our concerns with each other.”

Merv Horst, a Mennonite in Manhattan, heard about the service from a friend and found the formality of Episcopal liturgies appealing. The interactions among participants seemed a bit stiff at first, he says, but gradually that began to change.

The Rev. Margaret Mathauer, a vocational deacon at All Saints Church in South Burlington who has led services several times since the bishop stepped away from that role on June 30, says the first signs of connection among members were simple waves, and then brief conversations before and after the service.

“It just sort of happened organically, and I think there is such beauty in that,” says the Rev. Mary Taggart. She has succeeded the Rev. Kathleen Moore, a transitional deacon who recently left the diocese for a call in Erie, Pennsylvania, as the primary organizer of the services. “I am not a big computer person, but you almost forget you are on Zoom when you have been doing it for a long time. It becomes almost second nature.

“My sense is that there are a number of people who live alone, and even though they may be members of a parish that is faithful and checking in with them, they just are craving connection.”

That is true of Mary Gladden, a member of Holy Trinity Church in Swanton, who participates in the services every day by telephone from the Hawk’s Nest Senior Housing in St. Alban’s. “The most basic piece is I can look forward to speaking with somebody twice a day, whether I have guests or not,” she says. “I always feel my church family is my second family, and this has just added to my second family.”

One of the bright spots of her pandemic was the day fellow parishioners Wallace and Natalie Good brought her to their home so she could see the faces of people whose voices had become so familiar to her, she says.

Over time, Bishop Shannon says, it became apparent to participants that worshiping online was not the isolating experience that many Christians feared when the pandemic began. “A church building gives you a sense of intimacy,” she says. “But it is not the same level of intimacy as seeing someone’s bedroom, seeing their pillows behind them. I am pretty sure I have seen people in their pajamas as this thing has gone on. I was surprised by the intimacy that we reached sort of quickly. When somebody was not there, you noticed.”

Mathauer says participants’ trust in one another manifests itself most strikingly in intercessory prayer. “People have some pretty specific things they pray for during the intercessions,” she says. “To the point where sometimes I think, ‘Whoa, I don’t think I’d have the courage to say those kinds of things.’”

In more than four months together, the community has accompanied one member through a spouse’s heart attack, and another through a family member’s mental health crisis. It has prayed with members marooned by the pandemic in distant hotel rooms and prayed with them again when they finally arrived at home.

“Some people have it harder than I do,” Mary Gladden says. “That’s a good, fine thing; to pray for someone else.”

The community has also shared each other’s learning experiences, including Horst’s deepening curiosity about Anglican liturgy and theology and the bishop’s introduction to spring peepers, the small chorus frogs that increasingly supply the background music to compline now that the weather is warmer and participants have taken their computers outside.

Domestic animals have also helped bring the group together. Frequent appearances by Moore’s two cats “gave permission” for other members to introduce their pets, Taggart says. One Sunday MacVean-Brown’s dog, Detroit, spotted a deer in the midst of her sermon with predictably disruptive results. But perhaps no animal earned quite the notoriety as the Buhners’ rooster, Red.

On Father’s Day, Chris Buhner was reading the grave words of the prophet Jeremiah when Red commenced a steady stream of commentary. And though Buhner carried on with a mostly stiff upper lip—”I have become a laughingstock. Everyone mocks me.”—eventually he broke down.

On Wednesday, July 1, someone other than the bishop led a weekday prayer service for the first time since the community first gathered. It was the most visible of several changes.

For the first 17 weeks, the bishop had put together liturgies relying entirely on the Book of Common Prayer, reasoning that it was the book those who could not join the service online were most likely to have in their homes. But as a proponent of expansive language with an interest in other spiritual resources, she was eager to employ other resources including Enriching Our Worship, the New Zealand Prayer Book and St. Helena Breviary. The opportunity arose when Wallace Good offered to provide printed orders of service to attendees who can’t follow the service texts online.

The bishop, who had been consecrated less than six months before the pandemic struck, was also keen to find a way to use Zoom for the parochial visitations that the pandemic kept her from making in person.

Beginning on June 21, she began “visiting” parishes, by asking the host parish to construct the liturgy and provide readers, music and other elements of the service. The bishop still preaches, and the entire diocese is still invited, but the focus is on the host parish.

Most of the Green Mountain Online Abbey plans on remaining through these transitions.

“People talk about getting back to normal,” Wendy Buhner says, “but I feel we have been transported to something different. And how to sustain that … it is part of my spiritual practice.

“I couldn’t have asked for a more profound summer.