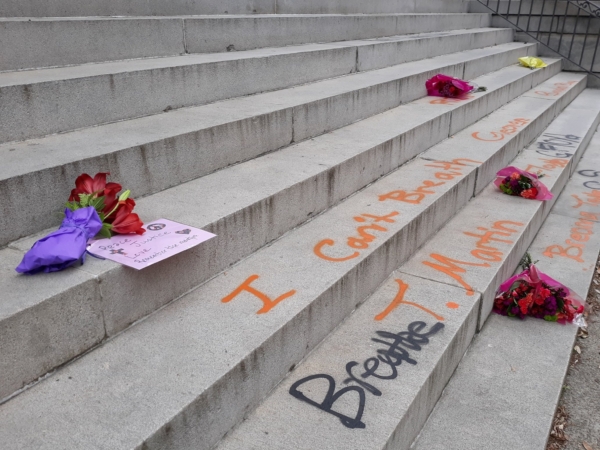 [Episcopal News Service] Richmond, Virginia, the capital of the Confederate States of America for most of its existence, is removing the Confederate monuments that have stood guard over its squares and streets for about a century. The street in front of City Hall now proclaims “BLACK LIVES MATTER” in giant yellow letters. And at the church once known as the “Cathedral of the Confederacy,” memorials to Confederate figures have been removed, while phrases like “I Can’t Breathe” and the names of George Floyd and Breonna Taylor are spray-painted on the front steps – graffiti done after a Black Lives Matter march that the church is intentionally leaving there indefinitely.

All of that sends a message, said the Rev. Charles Dupree, that “something’s got to change.” 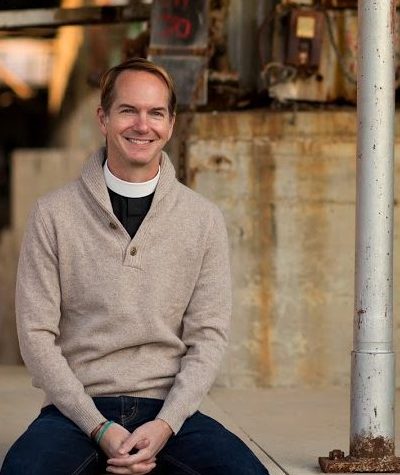 Dupree is the rector of St. Paul’s Episcopal Church in downtown Richmond, a parish that has been at the center of debates around Confederate symbols in churches for years. The church began removing some of its Confederate memorials several years ago and recently removed more. At the same time, church leaders decided not to paint over the Black Lives Matter graffiti, at least for the time being, because they see it as “a meaningful statement, and that it was what we ought to do, considering our own history,” Dupree told Episcopal News Service.

The church gained its nickname from its strong association with the Confederacy – the group of states that seceded from the Union, igniting the Civil War – during the time Richmond served as its capital and in the decades afterward. Jefferson Davis, president of the Confederacy, was among the cathedral’s members; he and Confederate General Robert E. Lee worshipped there. The pews where they sat were marked with plaques in their memory, stained-glass windows were dedicated to them and the Confederate legacy was honored throughout the church in the form of memorial plaques on the sanctuary walls, some of which were adorned with the Confederate battle flag.

That started to change in 2015, in the aftermath of the massacre of nine African Americans by a white supremacist at Emanuel African Methodist Episcopal Church in Charleston, South Carolina. St. Paul’s launched the History & Reconciliation Initiative to examine the church’s legacy of white supremacy, including the decorative elements in the building that honored it. Though HRI’s work went far beyond discussions of symbols, in that same year, the vestry voted to remove all memorial plaques with Confederate battle flags on them. 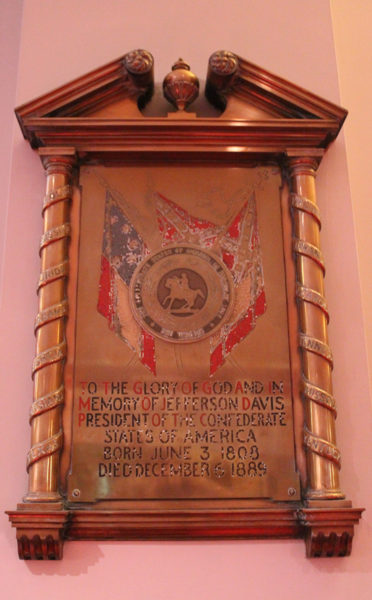 This plaque honoring Jefferson Davis was one of the Confederate memorials removed from St. Paul’s in 2015. Courtesy photo

The Rev. Melanie Mullen, The Episcopal Church’s director of reconciliation, justice and creation care, was serving at St. Paul’s during that time and remembers the “cognitive dissonance” she felt as a Black woman in that space.

“It is a fabulous parish with wonderful liberal folks who are … big purveyors of racial justice, who since the ’70s had stuck their necks out” on issues like integration and LGBTQ rights, Mullen told ENS, “and yet worshipped in a place that received thousands of visitors a year who only wanted to look at the plaques. And they were everywhere. There were Confederate battle flags, there were needlepoint ‘stars and bars.’

“This is a church that really struggled to figure out what to do with its history and went through a deliberate process,” she added.

Several weeks ago, the church found itself deciding what to do about some very different race-related symbols: graffiti spray-painted on its front steps during a Black Lives Matter march on May 30. The church is adjacent to the Virginia Capitol, so marches often pass by it. The next day – Pentecost Sunday – Dupree went to the church to celebrate a livestreamed service and saw that buildings up and down the street had been tagged, including the church.

“The Episcopal Church is so protective of our buildings,” Dupree told ENS, “so that when we see it in any way other than we expect, it’s unsettling.” 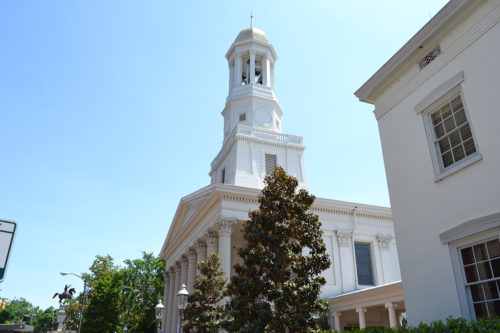 St. Paul’s has historically been known as the “Cathedral of the Confederacy.” Courtesy photo

But statements like “I can’t breathe” and the names of African Americans killed by police didn’t strike Dupree and other church leaders as obscene or offensive, and they agreed that it didn’t seem right to remove them – especially since the stairs have become a makeshift memorial, with people leaving flowers next to the names.

“These are important marks; these are important statements, and we need to leave them there,” Dupree said. “It’s just an important conversation that can’t be washed away anymore. And literally, that’s what would happen. We would have to scrub this away or wash it away and take a lot of effort to get rid of this conversation. And so I think it’s really important that these names, these people, are on our steps that we have to walk by and that people have to see every single day. And that message of ‘I can’t breathe’ – we want everybody to be able to breathe.”

Dupree said most parishioners that he’s heard from have been supportive of the decision to leave the graffiti for now. There are no plans to remove it for the foreseeable future, he said. 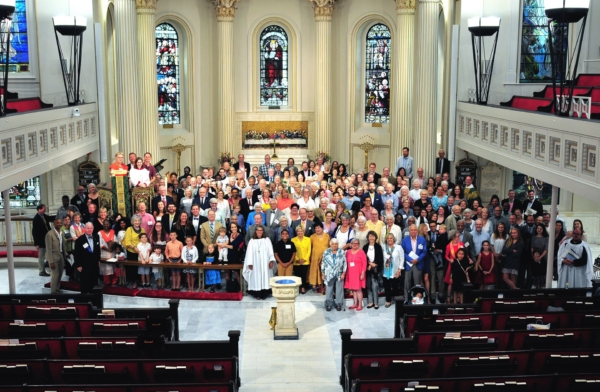 Parishioners and clergy of St. Paul’s in 2019. Courtesy photo

Meanwhile, in Richmond and in St. Paul’s, Confederate symbols continue to come down. On July 1, Richmond Mayor Levar Stoney ordered the immediate removal of city-owned Confederate statues, although the most prominent one – a monument to Robert E. Lee – is still standing. It is on state land, and a judge has temporarily blocked Gov. Ralph Northam from removing it.

And St. Paul’s has reexamined the ways in which Confederate symbols still appear in the church. On June 14, the vestry voted to remove seven plaques “associated with the Lost Cause era and ideology” and to rededicate the stained-glass windows that were installed as memorials to Robert E. Lee and Jefferson Davis. Although the windows and plaques do not contain battle flags or other obvious Confederate imagery, they are memorials to Davis, Lee and their families.

“We are living in a unique time in history that invites us to continue the self-examination of St. Paul’s racial history, and the intentional process of uncovering the suppressed realities of our past – not to erase history, but to learn from it,” the vestry wrote to the parish.

Lee and Davis “were explicit in glorifying the racial regime behind the Confederacy, and the subsequent society that perpetuated its racial views. It is these memorials that were created specifically to perpetuate the Lost Cause ideologies that we have decided to remove,” the vestry said.

Dupree hopes it will be another step in the parish’s journey away from being the “Cathedral of the Confederacy.”

“Considering the church’s history, we’re really trying to change that narrative,” he said.