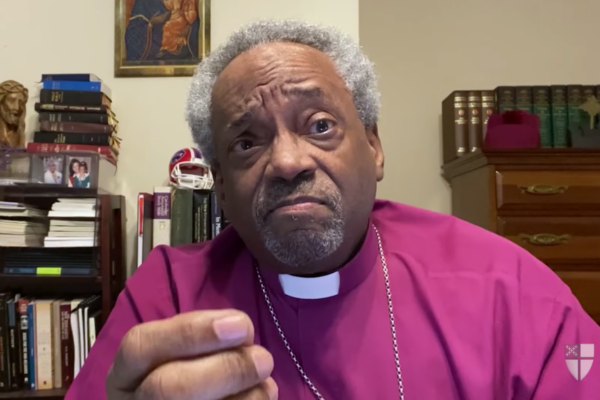 [Episcopal News Service] The Episcopal Church’s support of the Poor People’s Campaign hasn’t wavered since the ecumenical initiative was launched in 2018 to rally Americans behind the moral cause of fighting poverty – 50 years after the Rev. Martin Luther King Jr. made an appeal for economic security in the original Poor People’s Campaign.

This year, with Americans’ attention newly focused both on the economic toll of the coronavirus pandemic and the pervasiveness of systemic racism – the systems, structures and procedures designed to disadvantage African Americans – the church is deepening its engagement with the Poor People’s Campaign, through in-person calls to action and online organizing. In one recent example, nearly 500 people gathered online June 10 for an inaugural Episcopal Justice Assembly organized by the church’s Department of Reconciliation, Justice and Creation Care.

And on June 20, Presiding Bishop Michael Curry was one of the national faith leaders who offered prerecorded remarks for the virtual gathering of the Mass Poor People’s Assembly and Moral March on Washington. The Poor People’s Campaign reported more than 2.5 million views of the livestream and various broadcasts of the event.

The Poor People’s Campaign advocates a “revolution of values” and government policy changes that will counter “systemic racism, poverty, militarism and a war economy, ecological devastation and a distorted moral narrative of religious nationalism.” Organizers see those as the five injustices underlying American political and economic systems.

Bishop William Barber II, co-chair of the Poor People’s Campaign and president of the nonprofit advocacy organization Repairers of the Breach, has joined with Episcopal leaders in other recent public appearances. Barber, a Disciples of Christ pastor from North Carolina, also was a leader of the Moral Mondays protests that began in North Carolina in 2013. He preached for more than 40 minutes during Washington National Cathedral’s June 14 online worship service. The sermon has been viewed 160,000 times on the cathedral’s YouTube channel.

“We must turn away from death and towards life. In every aspect of our life together, we must recognize that death is no longer an option,” Barber said. “We need real reconstructing of society rooted in the deep moral values of our faith.”

Hours after preaching at the cathedral, Barber joined Washington Bishop Mariann Budde and other religious leaders in a rally outside St. John’s Episcopal Church, Lafayette Square, across from the White House.

“We are here to pray, we are here to protest and we are here to commit ourselves yet again to the long march that is before us,” Budde said in video of the rally, which has been viewed more than 12,000 times on Repairers of the Breach’s Facebook page.

Barber, in a written statement to ENS, commended The Episcopal Church for its early endorsement of the Poor People’s Campaign and its continued involvement this year. He also thanked Curry for helping to “frame the moral choice before us as a nation.”

“Will America continue to ignore the pain and leadership of poor people? Or will we finally listen to their cries and re-make an America that works for all of us,” Barber said. “With The Episcopal Church in this struggle for the long haul, along with over 20 other denominations and faith bodies, and the hundreds of partners joining in poor people’s struggles across the country, we believe it’s time to believe again.”

The Episcopal Church’s Executive Council formalized the church’s support for the Poor People’s Campaign in a resolution passed in January 2018, “acknowledging the unfinished work of the 1968 Poor Peoples Campaign, celebrate the revival of the movement.” The original Poor People’s Campaign was the last justice initiative led by King before his April 1968 assassination.

In June 2018, Episcopalians joined the thousands of people from across the country who gathered in Washington for a three-and-a-half-hour Poor People’s Campaign rally on the National Mall. Organizers paired the rally with a 40-day mobilization of state-level advocacy on poverty and related issues.

More than 38 million Americans lived in poverty in 2018, according to the Census Bureau’s most recent report. The poverty rate, at 11.8% percent, had been declining in recent years, though this year, the coronavirus pandemic ignited a sudden economic downturn that, by May 2020, had left at least 21 million workers jobless, according to the latest monthly data.

In early May, with the economic landscape darkening and the Poor People’s Campaign rally approaching, the Rev. Melanie Mullen, the church’s director of reconciliation, justice and creation care, helped convene a Justice Wisdom Circle to gather input from church leaders who have long been working on justice issues. They discussed ways of expanding that work while acknowledging the church’s commitment to the Poor People’s Campaign.

Among those who participated were the Rev. Glenna Huber, rector of Church of the Epiphany in Washington, D.C.; Byron Rushing, vice president of the House of Deputies; Aaron Scott, the Diocese of Olympia’s anti-poverty missioner; the Rev. Carolyn Foster, a deacon from the Diocese of Alabama and co-chair of the diocese’s racial reconciliation commission; and the Rev. Mike Kinman, rector of All Saints Episcopal Church in Pasadena, California.

They discussed the historic and ongoing racial injustices in the United States, systemic problems that later were underscored and brought to the forefront of public debate by the May 25 killing of George Floyd, an unarmed Black man, while being detained by police in Minneapolis, Minnesota.

“This is a moment and an opportunity to come together,” Mullen told ENS. The Justice Wisdom Circle’s conclusion, she said, was that The Episcopal Church still is called to engage in justice work – and it could be doing more.

One result was the Episcopal Justice Assembly, a video conference on June 10, and participation exceeded expectations, Mullen said. Meeting virtually rather than in person facilitated wider participation across geographic regions. The 480 people who joined the Zoom meeting also were able to participate in small group discussions through 50 breakout rooms.

They learned about the church’s history of advocacy, shared their own experiences, and discussed ongoing ministries around the church addressing poverty and homelessness. And they committed to spreading the word about the Poor People’s Campaign’s Moral March on Washington.

The church’s Justice Wisdom Circle, now looking to harness this recent momentum, has planned another organizing meeting for next week, and a second Episcopal Justice Assembly is in the works, possibly toward the end of summer. Anyone interested in receiving email updates on those plans are invited to complete the sign up form.