The Rev. Paul-Gordon Chandler, an Episcopal Church mission partner serving as senior Anglican priest of the Church of the Epiphany and the Anglican Centre in Doha, Qatar.

[Episcopal News Service] The Rev. Paul-Gordon Chandler, an Episcopal Church mission partner serving in Qatar, is among this year’s recipients of the prestigious Lambeth Awards for outstanding contributions to the church and wider society.

The Hubert Walter Award for Reconciliation and Interfaith Cooperation was awarded to Chandler “for his distinct and exceptional contribution in using the arts for interreligious peacebuilding around the world,” Archbishop of Canterbury Justin Welby said in announcing a total of 32 awards recognizing significant contributions in fields such as evangelism, safeguarding, ecumenism, theology and interfaith relations.

Chandler is the founder and president of CARAVAN, a nonprofit initiative affiliated with The Episcopal Church that uses the arts to build bridges between different cultures and religions around the world. The initiative is now in its 11th year of touring the world with peacebuilding exhibitions that showcase art.

Chandler “has spent his life focusing strategically on the role of the arts in the context of interfaith peacebuilding, toward building bridges of understanding, respect and friendship between the Abrahamic faiths,” the Lambeth Awards citation noted.

Currently serving as senior Anglican priest of the Church of the Epiphany and the Anglican Centre in Doha, Qatar, Chandler told ENS that he is “deeply honored to receive this award which seeks to inspire us to realize what is possible, and how we can each play an important role in shaping our world into one where understanding, respect and compassion are valued above all – regardless of faith, cultural, or ethnic backgrounds.” 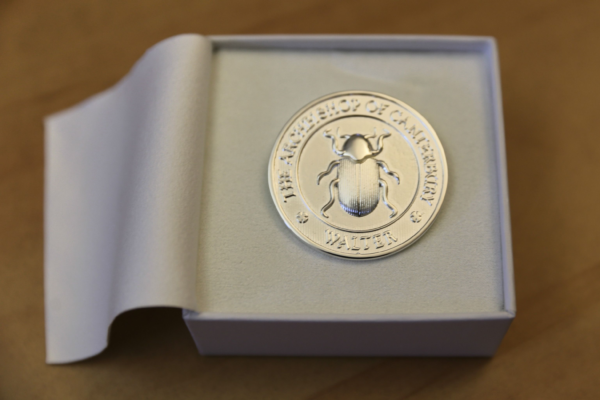 The Hubert Walter Award for Reconciliation and Interfaith Cooperation.

The award is named after Hubert Walter, Archbishop of Canterbury from 1193 to 1205, who had dialogue with non-Christians at a time of interfaith conflict. He accompanied King Richard on the third crusade, was involved in negotiations with Saladin over access for Christian clergy to the Holy Places in and around Jerusalem, and helped raise the ransom to get the king released from incarceration in Germany when he was captured on his return from the Holy Land.

“This is the fifth year of the Lambeth Awards, and I am constantly impressed and humbled by the work that recipients have accomplished, sometimes in the most challenging circumstances,” Welby said. “Not all are followers of Jesus Christ, but all contribute through their faith to the mutual respect and maintenance of human dignity which are so vital to spiritual and social health.”

The Lambeth Awards are usually presented at a ceremony at Lambeth Palace in London. This year, the event has been canceled due to COVID-19.

A full list of the recipients, together with brief citations describing their achievements, is available here.