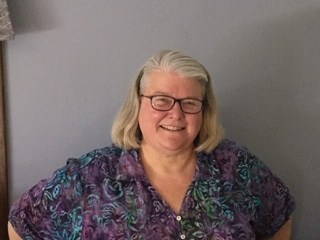 [Episcopal Church in Vermont] It’s not as though the Rev. Ann Hockridge didn’t know there was a pandemic on.

By March 15, she had already suspended the in-person worship service she leads for two yoked congregations in the United Church of Christ, as well as the one at Convivia/StJ, the Episcopal community she co-pastors in St. Johnsbury. But the arrival in northern Vermont of the virus that causes COVID-19 had not affected her work as a hospice chaplain for Caledonia Home Health Care and Hospice.

Then, one day, her director came into Hockridge’s office just as she was leaving to visit a woman who, in the parlance of hospice workers, was “actively dying.”

The health system had just classified chaplains as non-essential workers, the director said.

Hockridge got permission for her impending visit, but nothing after that.

People who minister to the dying are practiced in keeping track of their own feelings, lest other people’s grief pull them under, and Hockridge recognized in herself a mixture of resentment and understanding. “To put it bluntly, my feelings were hurt,” she said. “It was like middle school, and I had been booted out of the cool kid lunch table.” At the same time, she realized that personal protective equipment (PPE) was in short supply.

“There was a sense for me that if I used that mask or that gown or that face shield, I was taking it away from a teammate, and potentially taking it away from a family that may need important nursing care,” she said. “Also, I recognized I needed to do my part to minimize contact with our families in order to minimize the potential for spreading the virus to our patients and their families.”

Hockridge set off as she had numerous times since the pandemic began, but this visit was different.

“I realized that despite my hurt feelings about being named non-essential, something had really shifted for me,” she said. “It was not just the risk I posed to someone else, but the risk I was facing.” And that anxiety was exacerbated by the possibility that she would bring the disease home to her partner, who is in a high-risk category for the virus, and their two teenage children.

In the three months since that visit, the virus has transformed everything about the way she and other hospice chaplains do their work, requiring deeper levels of attentiveness, adaptability and self-awareness.

Hockridge said she is fortunate to have visited most of those she currently counsels before the pandemic began. “We’ve had real life physical contact, so that helps me because I can say, ‘Oh I recognize the living room where they are sitting,’ she said. “Or maybe I know that a certain expression on their face is accompanied by a slight slump of their shoulders. I am having to listen very carefully and watch very carefully and try to use the hints I am getting over the screen to evoke the full person.”

She says part-time positions at various churches have taught her that even when pastoral care must be given in less time than she would like, it can still be effective. “We are going through a similar process now as chaplains in recognizing that, yes, the Zoom or the telephone call is not ideal, but it can be enough,” she said.

Not long after the restrictions on home visits were instituted, Hockridge had an experience that brought this point home.

“When they called to say she had died, I had conversations sequentially with the adult children, and we did the same things we would have done if I were there. They asked if I would call in when they went to the funeral home. I called in, and we did what we would have done in the living room on the phone. We were telling stories, talking about this person’s legacy, what we loved about her, what drove all of us crazy.

“And I was shocked by that, but I think it helped me to approach new situations as they were coming up with some level of trust that we could make it enough.”

That isn’t always possible, she acknowledged. “The hardest piece for me is our patients who are in nursing homes. Contacts with them have basically ceased. Connecting over phone or via Zoom isn’t possible or practical because nursing homes having to prioritize contact with family,” she said.

But family visits have been quite limited in some instances, or simply prohibited in others, leading many people to experience an even deeper sadness at the moment of a loved one’s death, Hockridge said.

“I think one thing many people are struggling with is the fact that their loved ones may be dying alone in a nursing home or a hospital because of the restrictions around visitors,” she said. “And I think one of the things that many of us in hospice come to is, there is a difference between dying alone and dying lonely.

“I don’t say that in a Pollyanna way. I don’t mean that it’s fine that people have been dying without loved ones at their bedside. But there are people we see in hospice who chose to die alone, and it happens so frequently that we feel it can’t be a coincidence. That moment comes when family who have been very attentive or present or even hovering are called away, and in that moment their loved one dies. And I think some people choose the privacy of that moment to spare their loved ones seeing them taking their last breath.

“I guess I hold that up in these days. It’s mysterious and I don’t have easy answers about it, but I think it is something that is worth thinking about for all of us.”

As the pandemic has worn on, Hockridge has encountered other changes in the nature of her work. Hospice chaplains are typically available for bereavement support with those who have lost a loved one. Before the pandemic, only about a quarter of the people whom she called to offer such a service returned the call. During the pandemic, almost everybody calls back.

“We are experiencing a profound sense of collective grief, so people’s personal grief has been really escalated,” Hockridge said. “Also, the isolation has escalated people’s symptoms of grief.”

Working with people experiencing such profound sadness requires a particular kind of self-awareness.

“One of the things that has shifted is my own need for self-care,” Hockridge said. “In what we think of as a more typical time, there might have been a patient or a situation that really pressed on my own sense of sadness, or my own history, and in those situations, I’d need good peer support or good clinical supervision. It was always very clear cut.

“In this time, I am living with the same fear, the same uncertainty, the same exhaustion, some of the same isolation that is impacting all of my parishioners and all of our hospice patients, and all of our staff, and so it has been incredibly important for me to be talking about my confusion, my worry, my exhaustion with other chaplains and other clergy, so that I am not spilling out.”

For all of the hardships of the pandemic, Hockridge has had moments of deep gladness, particularly when she is able to touch not only the dying, but those who care for them.

“I am struck by the ways I have had to deputize—It’s not the right word, but it is what comes to mind—medical staff over the phone,” she said. “In one situation, someone was actively dying and wanted a prayer and an anointing, but they were adamant that they didn’t want anyone else in the home because of the risk of the virus.

“So I talked the nurse through how she could do the anointing as I said the prayer over speakerphone. Later, she said to me, ‘Nursing is my calling. I have no question about my sense of call. But I have never really felt like I was a minister, or that there really is a priesthood of all believers. But you trusting me to do that work and giving me the work to do made me realize I do have a ministry. I am part of the priesthood.’”