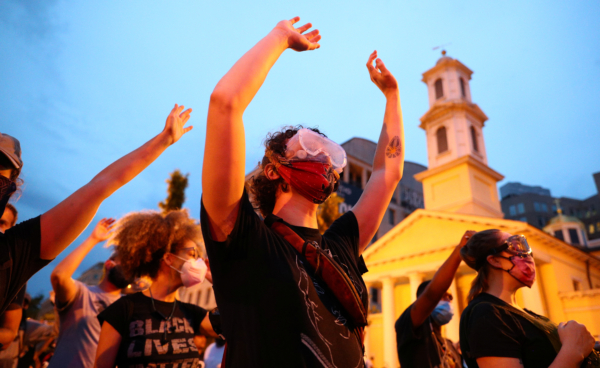 Protesters stand with their hands up on Black Lives Matter Plaza in front of St. John’s Episcopal Church in Washington, D.C., on June 22, 2020. Photo: Tom Brenner/Reuters

[Episcopal News Service] St. John’s Episcopal Church, the “church of presidents” in Washington, D.C., that has become a major flashpoint during weeks of unrest related to systemic racism and police brutality, was vandalized again on June 22 during another night of clashes between police and protesters in front of the White House.

“BHAZ” was spray-painted on the 204-year-old church’s columns, The Washington Post reported. The acronym was also spray-painted on a piece of plywood nearby, accompanied by “Black House Autonomous Zone,” an apparent take on the Capitol Hill Autonomous Zone in Seattle, Washington. That area, also called the Capitol Hill Organized Protest, is comprised of several blocks that were taken over by protesters and abandoned by police on June 8. One person was killed and two were injured in shootings there this past weekend.

BHAZ — Black House Autonomous Zone — has been spray painted on the columns of the historic St. John’s church outside the White House. pic.twitter.com/or2C2myVSX

In a series of tweets, President Donald Trump lashed out at the spray-painted messages outside the White House and another incident the same evening when protesters tried to take down a statue of Andrew Jackson, the seventh U.S. president and a slave owner, in Lafayette Square, where St. John’s is located.

Numerous people arrested in D.C. for the disgraceful vandalism, in Lafayette Park, of the magnificent Statue of Andrew Jackson, in addition to the exterior defacing of St. John’s Church across the street. 10 years in prison under the Veteran’s Memorial Preservation Act. Beware!

Police responded to that incident by sending over 150 officers and a low-flying helicopter into the area and spraying protesters with pepper spray as they forced them back, The Post reported.

Apparently referring to the graffiti at St. John’s, Trump said any attempt to establish a Seattle-style “autonomous zone” near the White House would be stopped.

There will never be an “Autonomous Zone” in Washington, D.C., as long as I’m your President. If they try they will be met with serious force!

St. John’s, a national historic landmark where one of the pews is reserved for the president, has taken on a new symbolic status in recent weeks, becoming the backdrop for escalating conflicts in American society. During riots that followed peaceful protests against racial violence and police brutality on the night of May 31, someone set a fire in the basement of the parish hall, destroying one room but leaving the rest of the property unharmed, except for some graffiti.

The next day, police violently forced peaceful protesters and clergy out of the area in front of St. John’s so that Trump could pose for photos holding a Bible in front of the church, an action harshly condemned by Episcopal leaders.

The church has since been the site of further protests and prayer vigils focusing on racial justice.

Leaders from St. John’s could not immediately be reached for comment on the new graffiti.