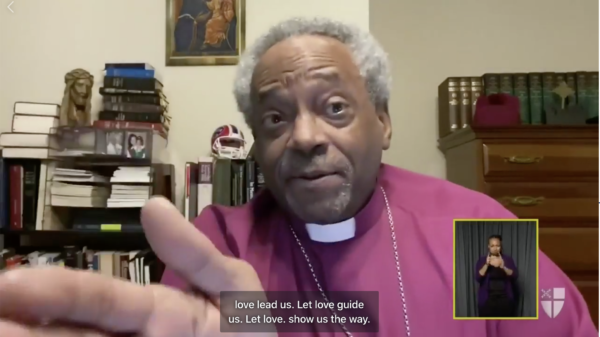 [Religion News Service] — With COVID-19 restrictions preventing an intended in-person rally in Washington, D.C., at least a million supporters of the Poor People’s Campaign reportedly tuned in on June 20 to watch a mix of live speeches and pre-recorded clips of liberal religious leaders calling for a “moral revolution” and the enactment of a sweeping policy agenda focused on the poor.

“We are gathered today to call for a radical redistribution of political and economic power, a revolution of moral values to demonstrate the power of poor and impacted people banding together, demanding that this country change for the better,” said the Rev. Liz Theoharis, a Presbyterian minister who co-chairs the campaign with the Rev. William Barber, a Disciples of Christ minister and pastor in Goldsboro, North Carolina.

Bernice King, who runs the King Center in Atlanta, said she was joining the modern iteration of the campaign to “stand with the 140 million poor people and low-wealth people urging America to address with the fierce urgency of now the big issue of poverty and race.”

Representatives for the Poor People’s Campaign said that more than 1.2 million people viewed the gathering via Facebook Saturday morning, and nearly 200 different groups — including houses of worship — hosted the stream on their Facebook pages. The event was also broadcast on MSNBC and various radio stations. Organizers planned to broadcast the event three times over the weekend, hoping to accommodate religious participants who are observing different sabbaths on different days.

“At one time, poverty was a temporary condition,” said Claire, a woman from Flint, Michigan, who didn’t share her last name. “You were on a down slope for a minute, but you could bounce back up. We can’t bounce back up today. It’s permanent. We’re not going back to the factory and building cars and trucks like we once did.”

A man named Curtis, who described himself as a “poor, white, gay Christian,” said the “war on the poor in this country seeks to blame the poor people for their circumstances.”

“I come here as a Muslim because my faith teaches me that I must stand with the most vulnerable people in my society,” Sarsour said in a clip taken from a past Poor People’s Campaign rally. “My God doesn’t just tell me to go pray in the mosque. This that we’re doing today is an act of worship, because my God is a practical God.”

Brous echoed Sarsour in her own talk, citing Judaism’s approach to debt forgiveness.

“The oldest and the boldest formula for economic justice comes straight out of the Hebrew Bible,” she said. “In the 50th year, the jubilee year, the great shofar is sounded and two things happen: all of the slaves are freed and all property reverts back to its original owners. This is a holy reset button … Fifty years after the assassination of Dr. King, we declare a jubilee.”

“We already know that poverty and systemic racism are completely and tightly linked with the climate crisis,” said Gore. “The climate crisis is already causing massive human suffering around the world and … it disproportionately affects the vulnerable — that’s particularly true for low-income families, communities of color, the elderly, children, the mentally ill, the homeless and those with preexisting conditions.”

Barber and Theoharis, calling their campaign a “fusion movement” that has drawn unions and low-wage workers in addition to activists and faith leaders, were apparently emboldened by recent protests against the killing of George Floyd, the black man killed by a Minneapolis police officer. 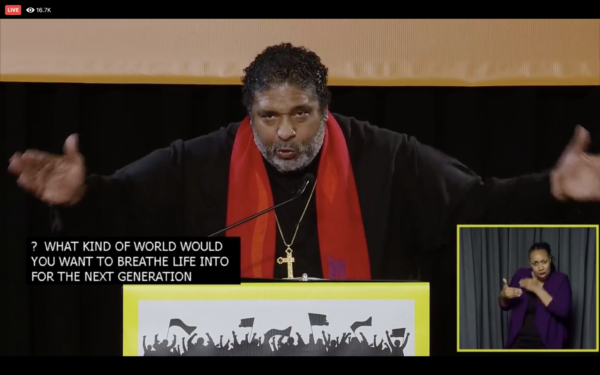 The Rev. William Barber speaks at the National Poor People’s Assembly and Moral March on Washington Digital Gathering on June 20.

“The worst mistake we could make now, with all of this marching and protesting in the street, would be to demand too little,” Barber said.

While their goals were overtly political and echoed the policies put forth by liberal Democrats, organizers insisted that their organization was nonpartisan. President Trump’s handling of the COVID-19 pandemic was repeatedly criticized, but he was rarely mentioned by name, with speakers focusing instead on what they framed as systemic issues.

Barber said his passion for eradicating poverty, including policy proposals, is rooted in his faith.