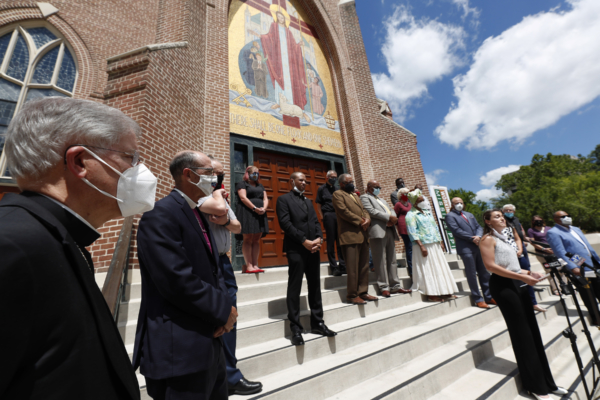 Members of Working Together Mississippi, including Mississippi Bishop Brian Seage (second from left), hold a news conference calling for the removal of the Confederate battle flag from the current Mississippi state flag at the Cathedral of St. Peter the Apostle Catholic Church in Jackson, Mississippi, on June 11. Photo: Rogelio V. Solis/AP

[Episcopal News Service] As Americans reexamine the persistence of systemic racism in the United States in light of recent highly publicized killings of Black people by police, the debate has gone beyond policies, sparking arguments about what symbols should be displayed in public places.

The push to remove Confederate monuments around the country, which gathered steam in the aftermath of the 2015 massacre at the Emanuel African Methodist Episcopal Church in Charleston, South Carolina, has gained further momentum in recent weeks. Those calling for the removal of statues of Confederate soldiers say the monuments honor and perpetuate the violent white supremacy that the Confederacy was founded on. 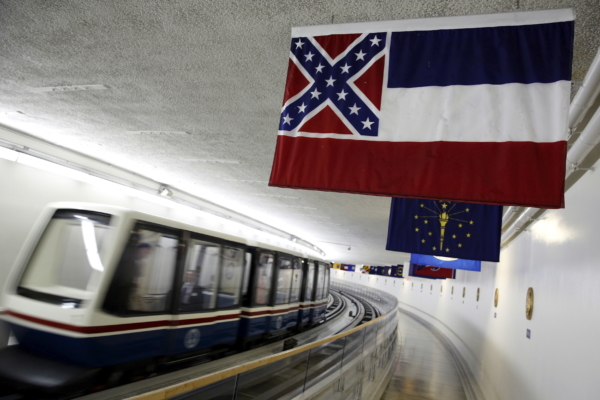 The Mississippi state flag, which incorporates the Confederate battle flag, hangs with other state flags in the subway system under the U.S. Capitol in Washington on June 23, 2015. Photo: Jonathan Ernst/Reuters

Bishop Brian Seage of the Diocese of Mississippi, like many other Mississippians, thinks it doesn’t belong there.

“I believe this flag belongs in museums and in archives and in history books,” Seage told Episcopal News Service, calling it a “deeply pastoral and moral” issue rather than a political stance.

“When we see the Confederate battle flag, yes, it represents history, but it also represents a painful period for folks – a really painful period … for many of our African American brothers and sisters, of injustice and an intention to not really see their full humanity.”

Seage and about 20 other Christian, Jewish and Muslim faith leaders – part of a group called Working Together Mississippi – gathered on June 11 to share that message at a news conference in front of the Roman Catholic cathedral in Jackson, the state capital. 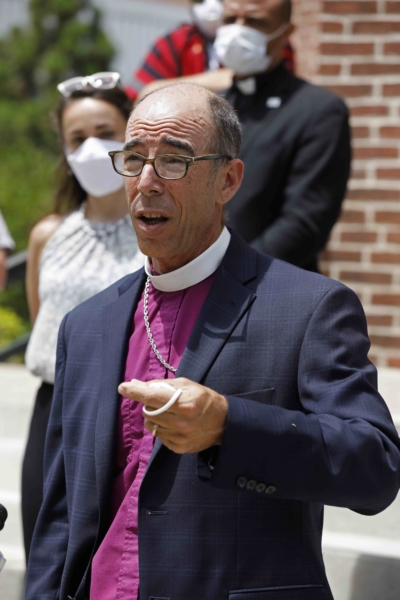 Mississippi Bishop Brian Seage calls for the removal of the Confederate battle flag from the current Mississippi state flag at the Cathedral of St. Peter the Apostle Catholic Church in Jackson on June 11. Photo: Rogelio V. Solis/AP

“It is time for a new flag that truly represents all of us,” Seage said at the news conference. “We call for our legislative leaders to act now.”

In a 2001 referendum, 64% of voters chose to keep the flag, and numerous attempts to change it in the state Legislature since 2015 have failed despite bipartisan support. Mississippi’s is now the only state flag that incorporates the Confederate battle flag; that symbol was removed from Georgia’s flag in 2003, although the flag that replaced it is based on the first national flag of the Confederacy.

Democrats in the Mississippi Legislature have revived the push to change the flag over the past two weeks, but their efforts so far have been blocked by some Republicans. On June 19, the NCAA announced that it will not hold championship events in Mississippi unless the state removes the Confederate banner from its flag.

In 2001 and again in 2016, the Diocese of Mississippi overwhelmingly passed resolutions encouraging the state to change the flag, Seage said. But his outspoken stance on the flag has gotten pushback from “people who really have a strong attachment to the family history that the Confederate battle flag represents for them,” he said.

“They’re difficult conversations, without a doubt, because it’s very charged emotionally,” Seage told ENS. “And one of the things that I always try to do is affirm the importance that it serves for their family. … Unfortunately, what the flag also represents for a significant portion of Mississippi’s population, namely the African American population – it represents a picture of non-inclusion. It represents, for them, violence. … It represents a way of life that had the intention of keeping them enslaved.”

Although the current effort to change the flag in the Legislature appears to be stalled for now, Seage hopes the gathering of religious leaders sent a positive message to lawmakers.

“I hope what was heard was encouragement to consider this [in] our state leadership and encouragement to try to do something about uniting the people of Mississippi versus further dividing them,” he said.