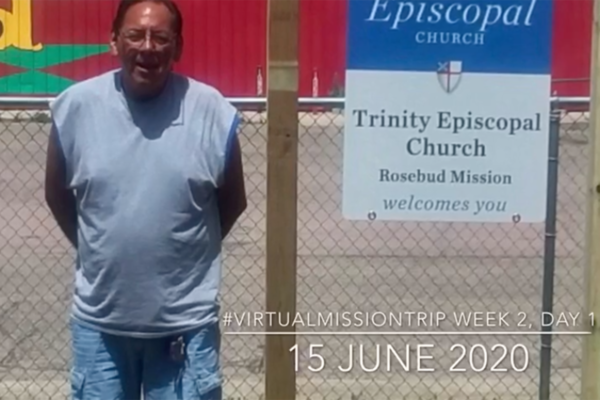 [Episcopal News Service] Emmanuel Episcopal Church in Webster Groves, Missouri, has sent mission teams to the Rosebud Episcopal Mission in South Dakota since the 1990s – to supply volunteer labor for construction and repair projects, but also to develop lasting personal relationships that bridge cultures, decades and hundreds of miles.

Then the coronavirus pandemic hit in March, disrupting the plans of Emmanuel and other churches that coordinate annual mission trips with the Rev. Lauren Stanley, presbyter for the west half of the Rosebud mission, which mostly overlaps the Rosebud Sioux Reservation.

With in-person trips canceled while COVID-19 remains a persistent threat, Stanley latched onto an alternative that maintains connection between the communities where she ministers and the congregations she would have been welcoming this summer: virtual mission trips.

“It’s a way to keep people in touch with us and to show that, yes, even though we don’t have mission teams here, we have work that’s ongoing,” Stanley said in an interview with Episcopal News Service.

The indigenous communities served by The Episcopal Church across the United States tend to have some of the country’s highest rates of poverty. Rosebud Sioux Reservation in Todd County, South Dakota, is no exception, with 55% of residents living below the poverty level, according to census data. Work is always waiting for mission trip volunteers, Stanley said.

A virtual mission trip may seem like an oxymoron. The trip is an essential component to these congregations’ missionary support for Rosebud, so how could that be accomplished online? Stanley emphasized that building relationships has been as important as completing building projects – if not more so. Starting this month, she began creating videos for the mission teams and sharing them on the Rosebud Episcopal Mission website and Facebook page.

It helps that most of those mission teams have visited Rosebud before. The virtual mission trips are “still a work in progress,” Stanley said, “but these are people who have a strong tie to us. Or if they’re a new group, they have a strong interest in coming to the Rosebud and working with us.”

Emmanuel has one of the longest records of missionary service with Rosebud, and church volunteer Donna Erickson has participated from the beginning, when she joined her oldest son on a youth group trip to the reservation in the early 1990s. The church later began sending adult mission teams, about 20 years ago.

“As we talked about the needs of the world and what we could realistically expect to do, it became really clear to many of us that what we wanted was a ministry of presence and relationships,” Erickson told ENS.

While helping to build and repair homes and churches, the volunteers from Missouri got to know the reservation’s residents, who then introduced the visitors to their extended families and sometimes even invited the Missouri Episcopalians back for graduations and funerals. In addition to the church’s mission trips each June, a small group from Emmanuel regularly returns in late August to attend the reservation’s annual fair.

This year, however, Erickson said she and other organizers knew early on that the pandemic could derail the mission trip. Indigenous communities are particularly vulnerable to virus outbreaks, and Rosebud was among the reservations in the spring that implemented lockdowns to slow its spread. State authorities report at least 50 COVID-19 cases among Rosebud residents, including one death.

Furthermore, many of the 20 or so people from Emmanuel who typically embark on the mission trips are older retirees and at higher risk of severe complications from COVID-19. In May, the church announced it was canceling the Rosebud trip.

Mission trip cancelations are part of a wave of disruptions across The Episcopal Church caused by the pandemic, which in mid-March forced the suspension of most in-person worship services. Some congregations have begun laying plans for resuming limited in-person services, though many domestic and international mission trips remain in limbo.

With trips to Rosebud Episcopal Mission canceled, some of that work simply won’t get done for now, Stanley said, but she and the mission’s congregations remain active in serving their neighbors. The virtual mission trips capture some of that activity, through the videos Stanley started sharing online last week.

“Those of you that have been here know that we have a lot of land to take care of,” Stanley said in her video for June 11, which includes footage of Danny Gangone and his son mowing grass at the Bishop Hare Center in Mission, South Dakota, a project delayed by repairs to the lawnmowers.

In her videos, Stanley documents delivery of cleaning supplies, a funeral for a deacon who died recently, painting and building repairs, installation of a new church sign and removal of a downed tree. Lately, she also has been assembling and distributing COVID-19 kits with face masks, hand sanitizer and other items. And when a surprise shipment of food arrived last week from a local charity partner, Stanley recruited volunteers to help sort it and take bundles to Rosebud families.

Stanley shoots the videos with her phone and edits them using iMovie, the results intentionally more personal than professional. Addressing the mission teams that had to cancel their trips, Stanley regularly identifies what those teams would have been doing, and she takes some time to explain aspects of Lakota culture. She plans to continue the videos through the summer, along the way acknowledging all who were unable to come in person this year. She typically hosts about 20 teams and up to 700 volunteers across the summer.

Stanley’s videos were received warmly by parishioners at Emmanuel Episcopal Church, Erickson said. “I think that it was good for them to see and be reminded and hear from her that she misses us and there would have been work for us to do,” she said, “even if it can’t fully convey the intensity of that experience or the emotional connection that I think we’re all missing.”

On her end, Erickson shared photos of past mission trips to the church’s Facebook page. The church also encouraged participants who normally would have paid $250 to cover food and gas during their van ride to South Dakota to donate that money directly to the Rosebud Episcopal Mission, to support Stanley’s work there.

Erickson said members of her congregation look forward to the day when they can return to the Rosebud Sioux Reservation in person. “To not have that was really a loss for several of us,” she said. “It’s such an integral part of our summer. … It’s been a blessing in many ways.”