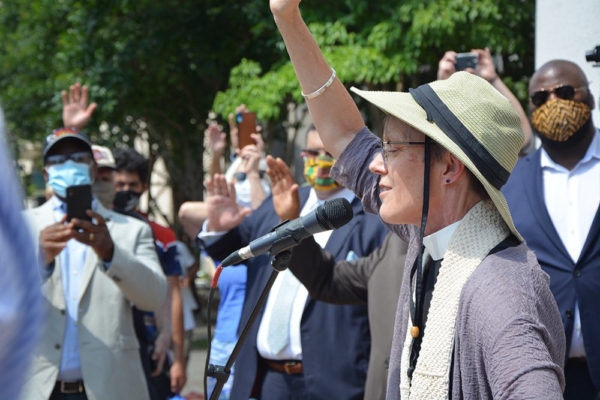 [Religion News Service – Washington, D.C.] — A series of religious demonstrations in Washington, D.C., over the weekend mixed prayerful calls for racial equality with frustration with law enforcement, lawmakers and the Trump administration.

Early Sunday (June 14), thousands of churchgoers and clergy, most of them African American, assembled at the National Museum of African American History and Culture to march to the newly christened Black Lives Matter Plaza — previously known as 16th Street Northwest at it passes the White House.

Once there, participants organized by the NAACP and Alfred Street Baptist Church, a prominent black church in Alexandria, Virginia, prayed and kneeled along the street, which is currently painted with the words “Black Lives Matter.”

“We’re here because of what happened with Ahmaud, Breonna, with George, (and) Rayshard,” the Rev. Howard-John Wesley, pastor of Alfred Street Baptist, told the crowd, listing the names of African Americans who have been killed in encounters with the police or alleged vigilantes. “We know that, sadly, that’s what we’ve been living with for the entirety of our time in this nation. … It’s important that this nation know that we have not forgotten, that we do not have racial amnesia.” 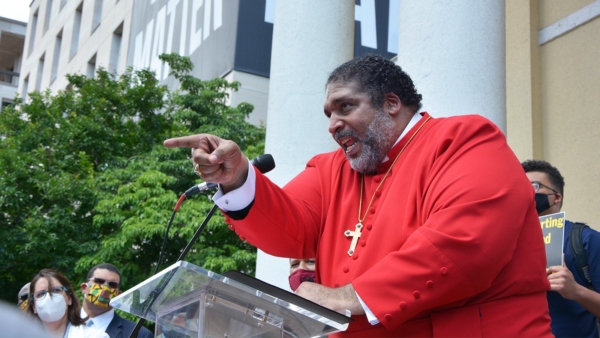 Just before noon, as the demonstration wound down, the Rev. William Barber, co-chair of the Poor People’s Campaign and pastor of Greenleaf Christian Church in Goldsboro, North Carolina, delivered the sermon at Washington National Cathedral’s Sunday Eucharist service.

In a homily titled “America, Accepting Death Is Not an Option Anymore!”, Barber traced the history of hardship shared by people of color and impoverished people in the United States. Noting the evils of slavery as well as times when immigrants to the United States were blamed for bringing disease, Barber drew connections between Scripture, the ongoing pandemic caused by the novel coronavirus and historic disparities that impact people of color.

“If we’re going to turn from all this death, we need real truth-telling,” Barber said. “But not only that: when a nation is facing unnecessary and unnatural death, there must be a response of the people. There must be a refusal to accept easy answers and a refusal to just go along to get along.”

Referring to the biblical prophet, Barber said, “So Amos says, God says: We need real lamenting. … In the text, God says, I need a remnant that will cry in the street and refuse to be comforted.”

He later added: “We need real reconstructing of society rooted in the deep moral values of our faith and of the Constitution.”

A few hours later, Barber appeared in front of St. John’s Episcopal Church, across Lafayette Square from the White House, to deliver a similar message alongside Sikh, Christian, Muslim and Jewish leaders who had gathered with clergy of other traditions to protest racism, police brutality and Trump.

Barber highlighted the recent killing of George Floyd, a black man in Minneapolis who begged for breath as a police officer kneeled on his neck for 8 minutes and 46 seconds.

“Every time the church and religious people have seen these deaths and buried folk and sent them to heaven, but did not fight for change here — that keeps this stuff alive,” Barber said.

The pastor argued that the killing of African Americans by police is only one form of racism, pointing to disparities in health care access, wages and the treatment of indigenous people.

He argued that the growing protest movement is “not just against one form of racism,” but that “what George Floyd spoke is shorthand for all our pain: I can’t breathe.”

He criticized the Trump administration’s response to the coronavirus pandemic as “negligent,” noting that the poor and people of color are disproportionately represented among its victims — including George Floyd.

“If we had had cameras in hospitals, how many times would we have heard ‘I can’t breathe’?”

Barber also lauded activists who have been marching for weeks, citing in particular those who are not motivated by faith.

“Sometimes the people in the street have been more prophetic than the religious folk! We must repent of that!”

Among the faith leaders at the gathering was Bishop Mariann Budde, the Episcopal bishop of Washington, who fiercely criticized Trump after demonstrators — including clergy — were cleared from Lafayette Square by law enforcement on June 1, shortly before the president posed for cameras in front of St. John’s while holding a Bible aloft.

St. John’s has become the epicenter of protests in Washington ever since, and Budde, who prayed at the gathering, said religious leaders have a role to play.

“The church has left the building,” she told RNS. “We’re not just in the building. We never were, but now we’re like: this is God’s sanctuary, and let’s be here.”

Bishop LaTrelle Easterling, who heads the Baltimore-Washington Conference of the United Methodist Church, fired up the crowd by arguing that privileged Americans have “manipulated” sacred texts to create a “savior who looks more like a Midwestern American than a Middle Eastern Jew.”

She said that the government “stands under God’s judgment” and called on her fellow Methodists to decry racism and injustice.

Imam Talib M. Shareef, president of the Nation’s Mosque, Masjid Muhammad, in Washington, said people of faith should lend a hand by helping demonstrators channel frustration into a positive force for good.

“The role of people in faith ought to help us keep our humanity — we can become beasts, too, because of anger,” he said. “If we are consumed by the anger, (then) we will lose our humanity.”

The faith leaders at all three demonstrations appealed to hope, arguing that there remains reason for optimism.

“There has always been a remnant of people in this country who have refused to hate and chose to love,” Barber said.