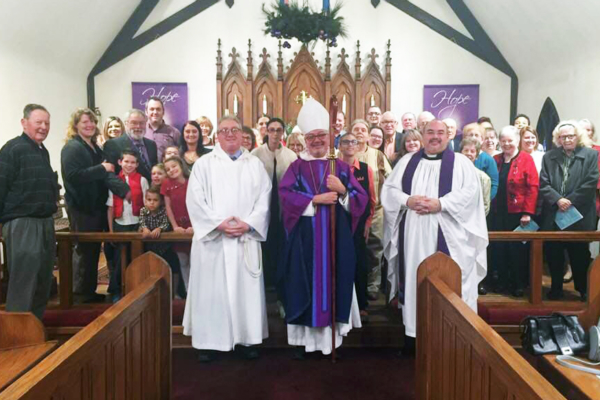 Springfield Bishop Daniel Martins poses for a photo with the congregation at St. Barnabas Episcopal Church in Havana, Illinois, during Martin’s December 2019 visit to the church. Photo: St. Barnabas, via Facebook

[Episcopal News Service] The Diocese of Springfield’s Standing Committee is in mediation with Bishop Daniel Martins to settle a disagreement over the bishop’s retirement, with Martins planning to retire in June 2021 and the Standing Committee insisting he step down sooner.

In documents obtained by Episcopal News Service, the Standing Committee has informed Martins it is unhappy with its previously approved arrangement allowing the bishop to reside in Chicago and commute to the diocese, which encompasses the largely rural southern half of Illinois.

“Your continued residence in Chicago presents an untenable situation best addressed by advancing your previously announced retirement date,” the Standing Committee said in a May 8 letter to Martins, threatening to revoke the permission it granted him to live outside the diocese. 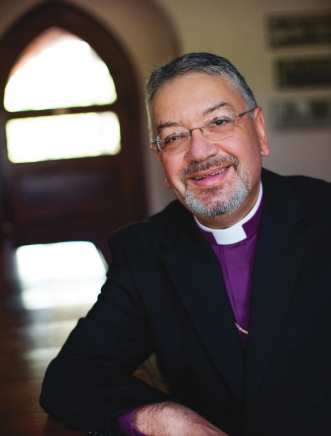 The Standing Committee also referenced an April 15 letter to Martins, in which it urged Martins to move his retirement date up by eight months, to October 2020. “This will give you the opportunity to preside at the annual synod and for the diocese to celebrate your ministry with us,” the Standing Committee said in April, offering to make “appropriate financial arrangements” for him.

Martins refused, according to the Standing Committee.

The diocese now is working with a mediator to settle the dispute, with input from Bishop Todd Ousley, who leads The Episcopal Church’s Office of Pastoral Development and regularly assists dioceses with their bishop transitions. In an email, Ousley declined to comment for this story, citing “this sensitive diocesan matter.”

The Rev. Beth Maynard, president of the Standing Committee and rector of Emmanuel Memorial Episcopal Church in Champaign, said by email she wouldn’t respond to questions about the dispute because of the ongoing mediation.

Martins announced his retirement plans in October 2019 in an address to the diocesan synod. When reached by phone, he declined to talk for this story about the mediation and the Standing Committee’s efforts to force his early retirement. He confirmed to ENS that he had asked for and received permission to live in Chicago starting in September 2018 because of a “personal family matter,” while returning to his diocese to continue his ministry there.

He told ENS, however: “My hope is to remain in office until my successor is consecrated.” The Standing Committee announced in December it was laying the groundwork for a bishop search, but Martins said this week he wasn’t sure how far the search had progressed.

The Standing Committee outlined its dissatisfaction with Martins’ living arrangement in its April 15 letter. “Your relocation has increased the financial burdens to the diocese, as your level of involvement in the work of ministry in this diocese and your physical presence in this diocese have greatly decreased,” the letter said. “Full episcopal ministry is not being provided, and you are largely inaccessible.”

That letter was drafted a month after Martins joined most bishops across The Episcopal Church in suspending in-person worship at Episcopal churches starting in mid-March in response to the nationwide surge in COVID-19 cases at the outset of the pandemic. Two months later, with new cases on the decline in Illinois, Martins began allowing congregations to return to their churches on a limited basis on May 31.

Some Episcopal congregations in the Diocese of Springfield have decided they will continue to gather online only while virus transmission remains a threat at public gatherings. For those that chose to reopen, Martins initially had them cap attendance at 10 people. A week later, Martins raised that cap to 25% of church capacity, mirroring the approach to reopening taken by Roman Catholic churches in the region.

Martins also resumed his visitations, starting with St. Paul’s Episcopal Church in Alton on May 31. He visited Trinity Episcopal Church in Mattoon on June 7, and on June 14, he joined an outdoor worship service at St. Barnabas Episcopal Church in Havana. Worshippers sat in chairs spread around the churchyard so they could maintain the distance recommended by public health officials to slow the virus’ spread.

Members of the congregation at St. Barnabas presented Martins with a drawing of their church, inscribed to him on the back “with much love, gratitude and thanksgiving for your guidance, leadership and episcopal support.”

The Diocese of Springfield is known as one of the more theologically conservative dioceses in The Episcopal Church. Leading up to the 79th General Convention in July 2018, Martins was one of eight diocesan bishops who still refused to allow use of same-sex marriage rites in their dioceses, though most of those bishops, including Martins, reluctantly accepted a compromise resolution to make the rites available in all domestic dioceses.

Martins was consecrated as the 11th bishop of Springfield in March 19, 2011. His predecessor, Bishop Peter Beckwith, retired in February 2010, leaving the diocese’s ecclesiastical authority in the hands of the Standing Committee. Between Beckwith’s retirement and Martins’ consecration, administration duties fell to the Ven. Shawn Denney, then serving as the diocese’s archdeacon. Denney, vicar of St. Luke’s Episcopal Church in Springfield, now is a member of the Standing Committee that is seeking to expedite Martins’ retirement.