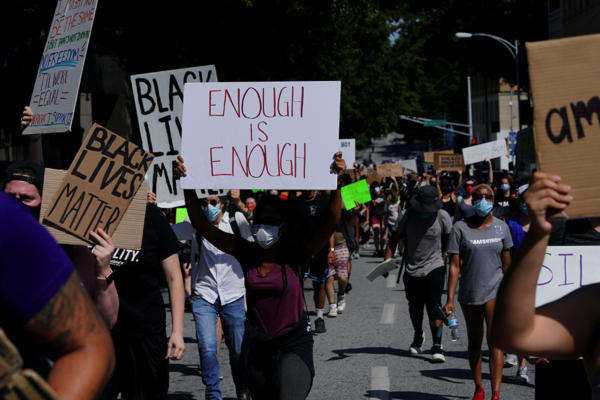 Protesters rally against racial inequality and the police shooting death of Rayshard Brooks in Atlanta, Georgia, on June 13. Photo: Reuters

[Episcopal News Service] – The Union of Black Episcopalians, through its mental health task force, is offering resources and support to the entire Episcopal Church community, as anxiety and tensions continue to rise after another killing June 12 of a black man by a white police officer.

Recent federal census surveys reveal that Americans – and particularly black Americans and Latinos – already were struggling with high rates of anxiety and depression during the COVID-19 pandemic, which has disproportionately affected communities of color. Those rates spiked for African Americans after the May 25 killing of George Floyd.

Floyd, a 46-year-old unarmed black man, died after being pinned to the ground for nearly nine minutes by police in Minneapolis, Minnesota, prompting worldwide protests and demands for racial justice reforms. Those calls for action were further fueled by the June 12 shooting death by police of Rayshard Brooks, a 27-year-old African American at an Atlanta, Georgia, drive-thru Wendy’s. As protestors took to the streets again, the restaurant was burned.

A June 14 autopsy revealed that Brooks died from two gunshot wounds to the back. During a struggle with officers who were arresting him on suspicion of drunken driving, he had grabbed one officer’s Taser. Pointing it at police as he ran away, he was shot by Garrett Rolfe, a white officer who has since been fired. Atlanta Police Chief Erika Shields also resigned.

John Robertson, an Orlando, Florida, psychologist who chairs the UBE task force, said repeated incidents like this heighten the sense of trauma and concern African Americans have for their safety. “Things are developing so quickly in these fast-moving and stressful times,” he said. The task force “feels very strongly that we need to be as active as possible in the process of healing.”

He cited the recent deaths of other unarmed African Americans at the hands of either white police officers or vigilantes. They include Breonna Taylor, 26, an emergency medical technician shot eight times in her Louisville, Kentucky, apartment by police serving a no-knock warrant, and Ahmaud Arbery, a 25-year-old jogging in his Brunswick, Georgia, neighborhood who was chased and shot by vigilantes who said they suspected him of being a burglar.

The Very Rev. Kim Coleman, UBE national president, said the anxiety runs much deeper and longer, dating to “the trauma black people have absorbed into our beings for the past 400 years, [and dealing with it] is even more important now during this pivotal period in our nation’s history with racism.”

The advocacy and civil rights group is hosting a webinar, “YAYAs—Keeping It Together in the Face of Trauma,” at 4 p.m. EDT June 21 to help address the issues.

Additionally, at 5 p.m. EDT July 19, mental health task force members Ayesha Mutope-Johnson and Carrie Brown will lead another webinar, “For the Living of These Days: What Do We Do with Our Rage.”

Recognizing and acting on the need for support

The task force was created about three years ago, after members began to address systemic racism as both a mental health and social justice issue, Robertson said.

From Florida to Texas, regional chapter members received training in Mental Health First Aid, a basic course that teaches participants to recognize signs and symptoms of mental health challenges and to offer resources.

Health and wellness coach Kimme Carlos, a task force member, conducted some of the UBE trainings, comparing them to “bringing in defibrillators and learning how to use them.”

The trainings empower congregations to act because “church doors are always open,” Carlos said. “People come to church seeking healing – physical, emotional and spiritual healing. Often, they are coming with brokenness, anxiety and a host of illnesses that we might not recognize until they are in a crisis.”

She has conducted trainings at Trinity Episcopal Cathedral in Trenton, New Jersey, the urban congregation she attends, where homeless and mentally ill persons are frequent visitors.

“When people begin to learn what mental health is, it’s not nearly as scary as we thought,” Carlos said. “We can understand the behaviors and learn to set boundaries so everyone in the church feels comfortable.”

The trainings also create a safe space to talk about mental illness – often considered a taboo subject and greeted with a wall of silence.

Carlos knows the silence all too well. She is the daughter of John Carlos, the 1968 Olympian who received a bronze medal in the 200-meter track and field competition. He held up a fist as the U.S. national anthem played. That action, symbolizing Black Power, unleashed a tremendous backlash that engulfed the entire family.

At age 12, she lost her mother to suicide. “Losing a parent is traumatizing, and even more when nobody talks about it, and in 1978 nobody talked about it,” Carlos recalled. “One day my mother was the most beautiful woman in the world to me and larger than life. The next day, she was gone, and nobody wanted to talk about it.”

By 14, she had turned to alcohol to help ease her pain, recalled Carlos. As an adult, she married, had two children, divorced, bought a house and found career success as a financial services professional, “but personally, my life was a mess.”

Now 54 and in recovery for 18 years, she has recognized, “I was suffering from undiagnosed depression and anxiety and post-traumatic stress disorder. But when I started talking about my addiction, folks would shush me.”

About six years ago, she founded the New Jersey-based nonprofit Urban Mental Health Alliance and now offers training for corporations, congregations and other organizations. Since the onset of the coronavirus pandemic in mid-March, requests for training have doubled, she said.

Christine Broome, 73, a member of St. Luke’s Episcopal Church in Philadelphia, Pennsylvania’s Germantown neighborhood, said the training helped her counsel a grandson who was frustrated when the stay-at-home orders to slow the spread of COVID-19 sent him home from college and restricted his daily activities.

“I was able to talk to him, and we could figure out a way to channel his energies differently and more productively,” Broome told ENS.

While “we’re not professionals, the training helps because it opens our eyes to people who might be having difficulties,” she said. “We approach it in terms of guiding them to where and how to find help.”

Similarly, she was able to offer comfort to a friend feeling isolated, when separated from her 102-year-old mother because of a COVID-19 diagnosis. “Having the training gives you a perspective of what people are facing and how they might be dealing with it.”

In Houston, Texas, Mutope-Johnson said the training supports the wider church’s role in “helping people to understand that health care is not just about high blood pressure and diabetes.”

A retired attorney and counselor, Mutope-Johnson teaches racial reconciliation classes at the Iona School for Ministry in the Diocese of Texas and serves as both a diocesan and Province VII anti-racism trainer.

She said she is astonished that people often don’t make the connection between physical health and historic racial and socioeconomic disparities. Fallout from centuries of systemic racism continues to plague many people of color, “yet we as a country have not thought very much about what happens when people are subjected to it for generations, especially in the experience of African Americans,” said Mutope-Johnson, 68, a UBE task force member.

After the end of slavery and Jim Crow segregation, systemic racism has continued to traumatize African Americans, whose behavior, while consistent with those experiences, is frequently stigmatized and criminalized by mainstream society, she said.

She hopes the entire church community will engage the task force’s efforts to address the issues through raising awareness and introducing resources. The webinars and trainings are not offered “because we are a problem for society, but because this society needs to address its effects on both black and white people,” she said.

White Americans “have a great deal of work to do as the result of years of white supremacy, years of privilege, years of addiction to power. Unless we all do the work together, we are doomed. We will continue to treat each other in ways that are difficult and dangerous.”

Carlos agreed. The disproportionate impact of COVID-19 on African Americans and Latinos and the killings of black people by white police officers and vigilantes compound the collective trauma experienced by the nation.

“More than ever, we have to be vigilant and acutely aware about issues of mental health and wellness,” Carlos said.

She emphasized self-care, adding that while digital and online church worship offers connection and support, “it is also challenging and exhausting. Find other ways to stay spiritually and emotionally connected, reaching out via telephone and letters. Stick to your routines, get physical exercise and rest. Stay on top of your medicine and doctor appointments, even if it means tele-health care.”

Coleman, UBE’s national president, emphasized that engaging in peaceful and productive action is also required to ensure “long overdue transformation for people of color, particularly our black brothers and sisters, to channel our anger and outrage into changing the oppressive systems that direct our lives.”

“That means blacks must vote and get others to vote,” Coleman added. “We must complete the census, hold constructive conversations with our policing authorities that then hold officers accountable and support black organizations like the UBE – the only one of its type for The Episcopal Church.

“We are on the ground, doing the work. That’s the way our mental anguish gives birth to reconciling change.”