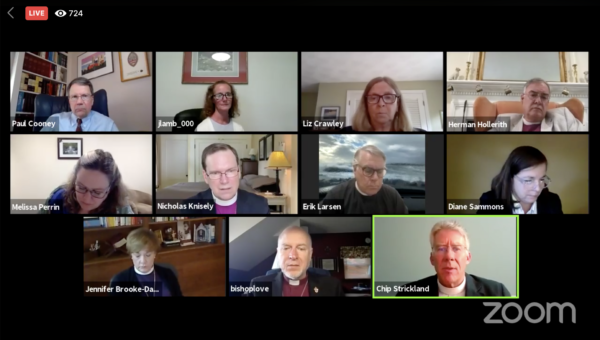 The Rev. Chip Strickland speaks during the Title IV hearing for Bishop William Love of Albany, held on Zoom on June 12, 2020.

[Episcopal News Service] The dispute over Albany Bishop William Love’s prohibition of same-sex marriage in his diocese took a major step forward at a hearing on June 12, when The Episcopal Church laid out its charges of canonical violations against Love, whose counsel defended his actions as not conflicting with existing church canon law.

The hearing, conducted under the church’s Title IV disciplinary process, was originally scheduled to take place on April 21 in Colonie, New York, but was changed to a Zoom meeting due to the COVID-19 pandemic. Title IV hearings are held when members of clergy are accused of breaking their vows or violating the church’s constitution and canons.

In this case, the church argued that, by prohibiting clergy in his diocese from using the same-sex marriage rites approved for churchwide use by General Convention, Love broke the vows he took when he was ordained a bishop to “conform to the doctrine, discipline, and worship of The Episcopal Church.”

During the hearing, presided over by Rhode Island Bishop Nicholas Knisely, the church, represented by lawyer Paul Cooney, and Love, represented by the Rev. Chip Strickland, did not dispute the facts of the case – or the theological validity of same-sex marriage – but presented arguments over whether Love’s actions violated church law. More than 700 people watched the hearing via Facebook Live.

The other members of the Title IV Hearing Panel are Assistant Bishop Jennifer Brooke-Davidson of the Diocese of Virginia, the Rev. Erik Larsen of the Diocese of Rhode Island, Melissa Perrin of the Diocese of Chicago and retired Southern Virginia Bishop Herman Hollerith. The panel is responsible for reviewing evidence and taking testimony in a setting similar to a court hearing before it rules on any disciplinary action.

Knisely said that it may take several weeks for the panel to reach a decision in Love’s case. The panel can either dismiss the matter or issue an order, which could include suspending or deposing Love – essentially stripping him of his spiritual authority.

Cooney argued that, by directing his clergy to continue complying with a diocesan canon prohibiting participation in same-sex marriages, Love had violated General Convention Resolution B012, which stipulates that “provision will be made for all couples desiring to use these [same-sex] marriage liturgies in their local congregation.”

Cooney also noted that B012 contains a provision for bishops who are theologically opposed to same-sex marriage to have other bishops provide pastoral support to the couple and celebrant, if needed, and that Love also refused to do this.

In his defense of Love, Strickland, who also serves as the Diocese of Albany’s chancellor, asserted that Resolution B012 does not hold canonical status and, therefore, Love had not committed a canonical violation. In Strickland’s interpretation of current church law, authorized trial rites (like the same-sex marriage liturgy in question) only have canonical status if they are proposed revisions to the Book of Common Prayer. Strickland argued that B012 does not fall under that category, presenting records from General Convention discussions in which that point was made clear and noting that language in a previous version of the resolution identifying it as a revision to the Book of Common Prayer was intentionally deleted from the final version.

“Does the rubric express an unchangeable tenet of the Christian faith or not?” Cooney said. “Do they state doctrine or do they just reflect it?”

Strickland pointed to the church canon that simply instructs clergy to follow the rubrics in the Book of Common Prayer.

Love himself did not speak except for a brief introduction in which he thanked the members of the panel and the people of his diocese, and to answer a question from Hollerith about whether he had given any pastoral direction to address the pain of people to whom he had refused same-sex marriage.

“I’ve tried to be pastorally sensitive to that,” Love said. “I have consistently met with same-sex couples and spoken to them personally. … I do know how difficult this is for all of us, and my heart is breaking for all of us. It’s breaking for the church.”

Though Title IV hearings are uncommon for sitting bishops, the Love case follows a 2017 hearing when then-Los Angeles Bishop J. Jon Bruno was accused of misconduct in a diocesan property matter. The panel concluded Bruno acted improperly, and he was suspended from ordained ministry.

History of the case

In 2009, General Convention passed several resolutions seeking to make the church more welcoming to gay, lesbian, bisexual and transgender people, including by developing liturgies for blessing same-sex unions. Those liturgies were approved for use by General Convention in 2012.

Then in June 2015, the U.S. Supreme Court ruled that same-sex civil marriage was legal in all 50 states. The 78th General Convention had just begun in Salt Lake City, Utah, and the bishops and deputies proceeded to approve the trial use of rites for same-sex marriage ceremonies that had been drafted by the Task Force on the Study of Marriage.

Love was one of eight U.S. diocesan bishops who, leading up to the 79th General Convention, still refused to allow use of the trial rites in their dioceses. Proponents of marriage equality sought a compromise that would ensure that same-sex couples had access to the rites in all domestic dioceses, even if bishops were opposed.

During its July 2018 meeting in Austin, Texas, General Convention passed Resolution B012, which essentially allowed those bishops to opt out of the process altogether, by asking an outside bishop, as necessary, to provide pastoral support when couples asked to use the trial rites. Though some supporters of same-sex marriage questioned whether a bishop’s involvement is even needed for individual weddings, the resolution passed with an overwhelming majority, including the backing of some of the former holdout bishops.

Facing a Dec. 2, 2018, deadline for implementing B012, the conservative bishops took a range of approaches. Virgin Islands Bishop Edward Ambrose Gumbs, for example, simply told clergy in his diocese to begin using the new marriage rites. Others, such as Dallas Bishop George Sumner and Springfield Bishop Daniel Martins, advised their congregations that bishops from neighboring dioceses would provide oversight if the rites were requested.

Love and Florida Bishop John Howard were the most vocal opponents of B012 during the General Convention debate, though Howard, too, ultimately offered clergy in his diocese a path toward offering the rites, with oversight from another bishop.

Of U.S. bishops, only Love outright refused to honor B012. In a Nov. 10, 2018, letter to his diocese, Love said he would not allow same-sex couples to be married by priests in the Diocese of Albany.

The letter cited Bible verses from Leviticus to Romans to support Love’s belief that sexual intimacy between two men or two women was never God’s plan. He called homosexuality “sinful and forbidden” and cast the long-simmering Episcopal debate over same-sex marriage as a kind of existential crisis for the church, which he argued, had been “hijacked” by a powerful, secular “Gay Rights Agenda.”

Love also said implementing B012 would require him to violate his vows of ordination, adding that others in his diocese are just as adamant in opposing same-sex marriage. The Diocese of Albany is based in New York’s capital city, though most of its 130 congregations are in less-populated communities between the Canadian border and the Catskill Mountains.

The reaction from top Episcopal leaders was swift. Presiding Bishop Michael Curry issued a statement two days after Love’s letter. In it, Curry affirmed the church’s commitment to full inclusion of LGBTQ members while respecting the conscience of those who disagree with the church’s policy on marriage.

At the same time, Curry said, all clergy are required to “act in ways that reflect and uphold the discernment and decisions of the General Convention of the church.”

The developments sent shock waves through the diocese, with supporters and opponents of Love’s decision both uncertain what would happen next. Curry followed up in January 2019 by temporarily restricting part of Love’s ministry as bishop because Love’s “conduct in this regard may constitute a canonical offense.”

Then in September 2019, while the House of Bishops was meeting in Minneapolis, Minnesota, church leaders informed Love he had been referred to the hearing panel for potential discipline under The Episcopal Church’s Title IV Canon.

In an interview with Episcopal News Service during the House of Bishops’ September 2019 meeting, Love defended his actions and said he was thankful that he would have an opportunity to make his case before the panel.

“What I tried to do as best I can, by the grace of God, is to be faithful and obedient to that which I believe the Lord has called me to, even though it sometimes can be very difficult, and sometimes it’s not politically correct,” he said.

Correction: An earlier version of this story misstated the Rt. Rev. Jennifer Brooke-Davidson’s current position. She has been the assistant bishop in the Diocese of Virginia since November 2019.