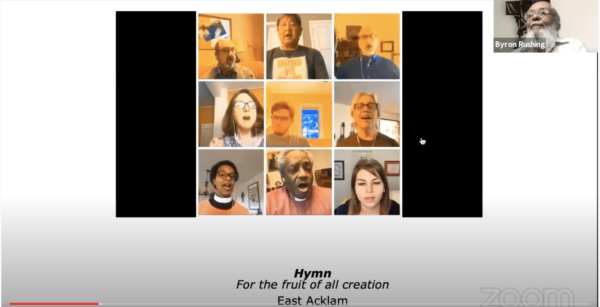 Members of Executive Council sing a hymn for Morning Prayer during the final day of council’s virtual meeting on June 11.

[Episcopal News Service] At its June 8-11 virtual meeting, The Episcopal Church’s Executive Council doubled down on the church’s anti-racism efforts, acknowledging in light of recent events that the church must do more, both to understand its own complicity in white supremacy and to dismantle it.

In order for that to happen in a mostly white church, there needs to be a paradigm shift, said House of Deputies Vice President Byron Rushing. During his meditation for Morning Prayer on the final day of the meeting, Rushing shared his perspective as a black man being acutely aware of racism every day and challenged white members of council to have that mindset.

“We can’t be honest about doing this work together until it is as equally important, every day, for you as it is for us, and that each of us know that,” Rushing said.

Council passed several resolutions affirming the church’s racial justice work, emphasizing efforts to respond to the recent killings of black Americans by police and white vigilantes and highlighting the disproportionate impact of COVID-19 in communities of color.

One resolution will send $150,000 to the Episcopal Church in Minnesota and $150,000 to the Diocese of Kentucky to “support their continuing work of dismantling the systemic racism we have created in this country and still permeates our church and society.”

George Floyd, an unarmed black man, was killed May 25 in Minneapolis, Minnesota, while being detained by police. Officers pinned him to the ground for nearly nine minutes while one pressed his knee into Floyd’s neck as he repeated, “I can’t breathe.” That killing prompted protests nationwide and around the world denouncing police brutality. Protesters also have drawn attention to the March 13 killing of Breonna Taylor, a black woman fatally shot in her Louisville, Kentucky, home by police who were executing a “no knock” warrant.

By providing substantial assistance to the dioceses that are responding to those two high-profile killings, Executive Council shows it is listening to Episcopalians who expect their church to take concrete action in opposing systemic racism, the Rev. Gay Clark Jennings, president of the House of Deputies, said June 10 during a committee discussion.

“The church is waiting for us,” she said, adding that this emergency spending is offered to the dioceses with no strings attached. The bishops and diocesan leaders will decide how the money can best support racial justice work on the ground.

Rushing also praised the work of the dioceses of Georgia and Atlanta in responding to the Feb. 23 killing of Ahmaud Arbery, a black jogger who was attacked and fatally shot by a white father and son in Glynn County, Georgia. Rushing and other church leaders chose not to include those two dioceses in the emergency funding, partly because the dioceses’ continued efforts don’t appear to depend on new spending.

“They’ve done a tremendous amount of work, and we know where they are,” Rushing told the Joint Standing Committee on Mission Within The Episcopal Church.

Rushing also helped draft two resolutions that reaffirmed The Episcopal Church’s commitment to racial justice work after the killings of Arbery, Taylor, Floyd and other black victims. One of the resolutions singled out Arbery’s killing as a case of “violent racial vigilantism” that brought to mind lynchings and other historic forms of racial terror. Arbery’s attackers, who said they thought he was a suspect in a series of recent break-ins, were not arrested in the killing for more than two months.

Executive Council “praises the prompt response of the Episcopal people and churches in the Dioceses of Georgia and Atlanta to publicly call for justice in response to this heinous crime,” the resolution says.

A parallel resolution focuses separately on cases of deadly police violence toward African Americans, citing Floyd and Taylor by name and praising the response of Episcopalians in Minnesota and Kentucky. It also calls on all Episcopalians “to organize, advocate, and dismantle systems, policies, and practices that reinforce police violence and brutality.”

Executive Council approved another resolution that outlines specific criminal justice reforms that would improve police accountability and help protect people of color from violence. The resolution encourages Episcopalians to advocate for the reforms, including bans on chokeholds, stricter protocols on use of force, creation of community oversight bodies and federal review of killings by police.

“Working to enact these policies is not a means to an end but one part in addressing systemic racism and providing long overdue protections to communities of color, ensuring that we live in a society that recognizes, values, and empowers all of God’s children,” the resolution concludes.

When it was brought before council, the Rev. Devon Anderson of Minnesota noted that the resolution seemed to preclude any of the various proposals that fall under the umbrella of “defunding the police,” but ultimately offered her support, and the resolution passed easily.

Another resolution addresses the toll that the COVID-19 pandemic has taken on communities of color, including indigenous communities, often because of barriers to adequate health care caused by poverty. Executive Council urged Episcopalians to “join with their communities in actively removing these barriers and addressing the social determinants of health.”

The pandemic and national outrage over police brutality toward people of color also prompted Executive Council to adopt a new program of “rapid response” grants as part of its core racial reconciliation initiative, Becoming Beloved Community. Episcopal and Episcopal-affiliated entities are encouraged to apply this summer for grants of up to $10,000 to back immediate efforts “to address systemic racism and racial violence.” Executive Council approved up to $100,000 for those grants.

While anticipating that the coming years will be some of the worst the U.S. economy has seen since the Great Depression, the Rev. Mally Lloyd, chair of the Joint Standing Committee on Finance, assured council that the church is in “solid financial shape.” Short-term reserves are above their targeted amount, with $12 million in unrestricted funds immediately available, and 2020 expenses are below budget so far.

However, Lloyd and Treasurer Kurt Barnes warned that, while income in the first quarter was not seriously affected by COVID-19, they do not expect that to continue. Several dioceses have asked to defer their assessment payments, and two have requested emergency hardship assessment waivers. Council passed a resolution granting a full waiver of Colombia’s assessment and a partial waiver of the Dominican Republic’s assessment. That resolution also granted a partial waiver to the Diocese of Dallas as it works toward a full 15% payment in 2021. In addition, the Diocese of Honduras requested financial assistance, as its schools – which are its primary source of income – are now closed, but teachers are still being paid. Council approved a $50,000 grant for two months of payroll and asked the presiding officers to appoint a short-term task force to work with the diocese on financial sustainability.

In light of expected income shortfalls from diocesan payments and investments, church staff were asked in April to identify immediate savings that could be implemented without personnel cuts. Staff identified $4.2 million in potential savings, and the finance committee went through the 2020 budget with those recommendations and other circumstances in mind. The committee ultimately put forward a resolution to make about $2 million in immediate budget cuts, much of it “low-hanging fruit” like travel expenses that are now moot. This sets a baseline for deeper cuts to be made as needed, in a “staged reduction” approach depending on how much income might decline.

Lloyd praised church staff and the committee for their work on the budget, which she said struck a balance between saving up for an uncertain future and using the church’s resources now to address the immediate crises of racism and COVID-19, with a nod to the Biblical story of Joseph.

“Are we in the stage of building and filling the barns against the future famine, or are we in the famine? … We’re in the cusp, I think,” Lloyd said.

Council is next scheduled to meet Oct. 9-12, during which further budget discussions – as well as possible changes to the 2020 parochial report – are expected.