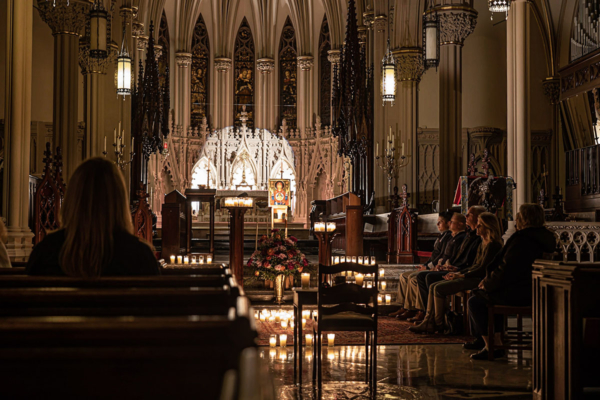 Worshippers gather for a contemplation and meditation service at the Center for Spiritual Imagination in the Diocese of Long Island’s Cathedral of the Incarnation. Due to the COVID-19 pandemic, the center’s services now are held on Zoom at 8:15 p.m. each Tuesday. Photo: Joe Pellicone

[Episcopal News Service] Kathryn Ashworth’s quest for God led her from the Christianity of her upbringing to New Age spiritual practices to a deep engagement with yoga. Now the Pennsylvania resident finds herself moving back toward Christianity through the contemplative practices of the Center for Spiritual Imagination at the Diocese of Long Island’s Cathedral of the Incarnation in Garden City, New York.

That’s exactly the kind of engagement the center’s founders hoped for when they officially launched it May 11 with a website and online opportunities for meditation, contemplative prayer and study of spiritual practices for difficult times.

“What we’re seeing is a lot of people reaching out to us and saying, ‘I’ve been looking for this for decades,’” said the Very Rev. Michael Sniffen, cathedral dean. “In some ways, what we’re doing is very traditional. What we think is perhaps novel is that we’re bringing lots of threads together that have not been woven together in a way that makes sense in today’s world.”

Those threads include a new model of monasticism; a focus on contemplative prayer; elements of Benedictine, Carmelite and Franciscan traditions; 12-step spirituality; and a commitment to justice. 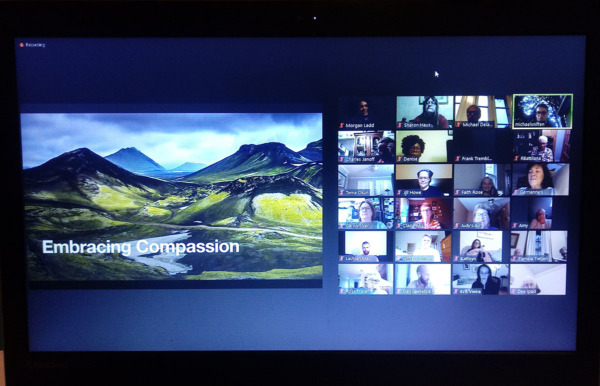 The Very Rev. Michael Sniffen, top right, cathedral dean and co-founder of the center and the Community of the Incarnation, teaches a workshop via Zoom on the spiritual practice of embracing compassion. Photo: Sharon Sheridan

Sniffen and three other cathedral staff members formed a new nonresident monastic order – the Community of the Incarnation – based at the cathedral. After more than a year of discernment and planning, they launched the center to offer others the opportunity to learn about and experience contemplative spirituality with the community. This includes weekly contemplative prayer and teaching sessions, as well as morning prayer, compline and other cathedral worship services, all currently offered online because of the COVID-19 pandemic.

Members vow to commit to:

Long Island Bishop Lawrence Provenzano is the community’s episcopal visitor and follows its rule of life. He traces the center’s origins from his first clergy conference 11 years ago when he invited fellow attendees to join him in a rule of life. The concept also stemmed from a focus on making the cathedral campus, which includes a theology school, into a diocesan model and resource for education, liturgy and spirituality, as well as an awareness that social action in a diverse diocese needed to “grow from deep prayer and a deep spirituality in the life of the diocese.”

“We’re not just another nonprofit social service agency,” he said. “Our focus on justice ministry, on trying to teach and live out the Gospel of Jesus Christ in the midst of the communities we serve, has to come from our knowing the heart and mind of God.”

Developing the center around the Community of the Incarnation “felt to me like we were putting everything in the right lineup,” he said. “We’re going to pray. We’re going to have a deep understanding of relationships of Jesus Christ. And from that we will act in the world.” 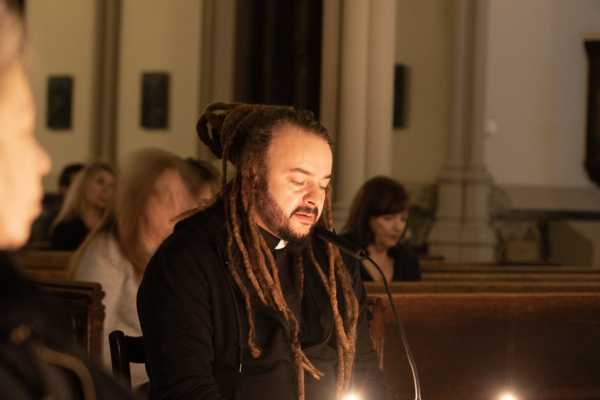 The Rev. Adam Bucko is co-founder and director of the Center for Spiritual Imagination at the Cathedral of the Incarnation in Garden City, New York. Photo: Joe Pellicone

Unlike in traditional monasticism, members need not leave their jobs or families to join the community. “New monasticism” responds to people’s longing to make the kind of commitment that traditional monastics made, “where everything in their life is connected to their spiritual quest for God, but at the same time they don’t want to leave the world,” said the Rev. Adam Bucko, the center’s director. “It’s open to people who are both married and single people … who want to make a serious commitment to God, who want to align all the aspects of their lives and bring that into prayer.”

This means offering new monastic practices for both children and adults and ways for families to practice spirituality together, said the Rev. Morgan Ladd, community co-founder and cathedral sub-dean, who oversees intergenerational worship and spiritual formation programming.

While located at an Episcopal cathedral, the center draws participants from various traditions.

“We’re an Episcopal community and deeply rooted in our Anglican identity,” Sniffen said. “But because our teachings focus on Christian contemplation, it’s a natural point of ecumenical contact. We have partners from many traditions – lots of them Christian, but some of them not.”

“For us,” he said, “it’s all about the connection between contemplation and just living. There is so much for us to learn across all of these traditions.”

Experience in the 12-step recovery community showed community co-founder Kris Vieira that many people “are searching for meaning in their life and to the spiritual dimension of their life. They are longing for kind of a practical means of encountering that.” Vieira, who is the cathedral’s administrator and assistant to the dean, continued, “Part of what we’re organizing ourselves around is really encouraging a deeper experience of God and a deeper community to go on that journey with.”

Pew research statistics showing the large number of religiously unaffiliated people received a lot of press coverage, she said. “Everyone was kind of bemoaning the younger people leaving the church in droves. But what we really have kind of honed in [on] is, it’s not so much that people don’t believe in a God or a higher power anymore, but they don’t really trust the institution to guide them to that.”

Noted Bucko, “One of the things that I have observed primarily spending many years working with the group that now is called ‘spiritual but not religious’ is that so many … were essentially people who grew up Christian but who felt they needed to leave the church in order to actually develop a deeper connection with God.

“They felt that there were simply no tools available” to achieve this when they went to church on Sunday, he said.

“I wanted to experience God directly. I wanted to feel God in my heart in a way that I wasn’t finding at church,” said Ashworth. “Meditation is my main yoga practice, and it’s been a resource for me to learn how to connect to God from within and have a more intimate and direct experience with God.”

The center’s contemplative prayer practices help her focus on her humanity in a different way as well as reconnect with her Christian roots, she said, adding that she doesn’t see either as a lesser path. Rather than yoga’s focus on breath awareness and mantra meditation, which involves tuning out other thoughts and feelings, contemplative prayer invites in your feelings and an awareness of where they reside in your body, she said.

She also is connecting to others at a scary and isolating time, she said. “It’s helping me get comfortable with processing my emotions.”

Ashworth’s reengagement with Christianity has come through the Episcopal church and the cathedral’s center. But getting her and others to join the church is not the center’s mission.

“I’m really not concerned about the numbers of people sitting in the pews on Sunday. I’m really concerned about our serving God’s people in the communities in which we have congregations,” Provenzano said. “What the Center for Spiritual Imagination is envisioning is an inclusion of people finding a deep sense of prayer and relationship with God, some of whom may want to become part of The Episcopal Church.”

“That being said,” he added, “renewal within the church will happen because we are in fact becoming the church to the wider community. It will not be just focusing in on ourselves.”

– The Rev. Sharon Sheridan Hausman is a priest in the Diocese of Newark and a freelance writer and editor.