[Episcopal News Service] The Episcopal Church’s Executive Council will consider this week two resolutions amplifying the church’s opposition to violence against people of color, in the name of George Floyd and other recent victims of violence by police and white vigilantes.

Executive Council’s Joint Standing Committee on Mission Within The Episcopal Church, meeting online June 9 in a Zoom session, voted to recommend one resolution responding to the killing of Ahmaud Arbery in Georgia and a second resolution about several recent killings by police of black citizens, including Floyd in Minnesota. 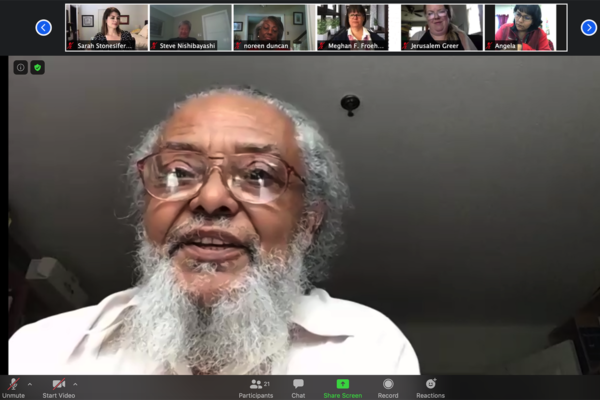 House of Deputies Vice President Byron Rushing, from the Diocese of Massachusetts, speaks June 9 during a Zoom session of the Executive Council’s Joint Standing Committee on Mission Within The Episcopal Church.

House of Deputies Vice President Byron Rushing, who also helped to draft the resolution on police brutality, presented the Arbery resolution to the committee. Though the recent killings collectively have inspired widespread protests against racial injustice over the past two weeks, Rushing said he and other Episcopal leaders thought it appropriate to speak separately on the Feb. 23 killing of Arbery by a white father and son. Arbery was jogging in Glynn County, Georgia, when he was attacked.

“This was a very different kind of killing. This was borderline lynching,” Rushing said. “We don’t want to confuse this with the killings that have been moving so many people now, which are killings by the police.”

The resolution begins by invoking the Executive Council’s visit to the Legacy Museum and the National Memorial for Peace and Justice during its October 2019 meeting in Montgomery, Alabama. It then connects lynchings and other historic forms of racial terror with the attack on Arbery. The resolution condemns authorities’ delay of more than two months in arresting Arbery’s attackers, and it praises the Episcopalians in the dioceses of Georgia and Atlanta for their public calls for justice.

The Rev. Devon Anderson, a Minnesota priest, presented the resolution regarding police brutality. It references Floyd and Breonna Taylor by name. Floyd died May 25 after repeating “I can’t breathe” while a white Minneapolis officer pinned him to the ground for nearly nine minutes, pressing his knee into Floyd’s neck. Taylor was shot and killed March 13 by white police officers during an overnight raid of her home in Louisville, Kentucky. 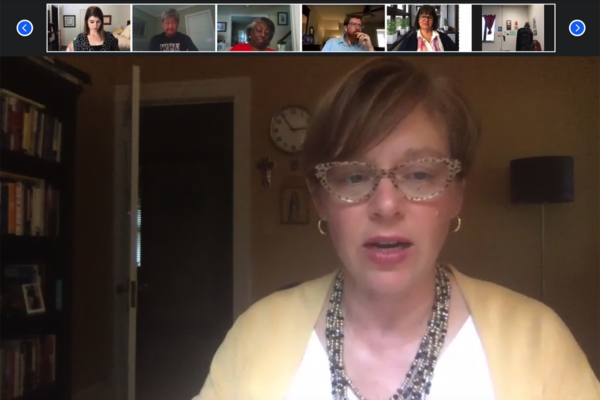 The Rev. Devon Anderson, a priest in Minnesota, addresses Executive Council’s Joint Standing Committee on Mission Within The Episcopal Church on June 9.

“The idea here is focusing on acknowledging the brutality and the violence … and then raising up for the wider church efforts that are going on the ground as models, particularly around community engagement,” Anderson said.

The resolution highlights the racial justice work of Episcopalians in Minnesota and Kentucky. Referencing a 2018 General Convention resolution on police violence and racism, Episcopalians are further urged to “join community and grassroots leaders in advocating … substantive and mandatory change in police departments and policing and to allocate resources for community-based models of safety, support and prevention.”

The committee also was scheduled this week to discuss a resolution responding to the disproportionate toll that the COVID-19 pandemic has taken on communities of color. Another resolution that advocates criminal justice and police reforms was reviewed June 9, but a different committee will take the lead on discussing and recommending the measure.

Executive Council is meeting online June 8-11 after it canceled plans to meet in person in San Juan, Puerto Rico. The pandemic has forced all church governance meetings to shift online, starting with the House of Bishops’ meeting in early March.

The resolutions on violence against people of color are scheduled for a final vote of the full Executive Council on June 11, along with potential budget revisions made necessary by disruptions caused by the pandemic and public health precautions that prompted suspensions of in-person worship across the country.

Editor’s note: An earlier version of this story reported that Executive Council was considering a resolution that referenced the shooting death of David McAtee by authorities who were clearing the scene of a protest in Louisville, Kentucky. Committee members on June 10 voted to remove the reference to McAtee from the resolution.