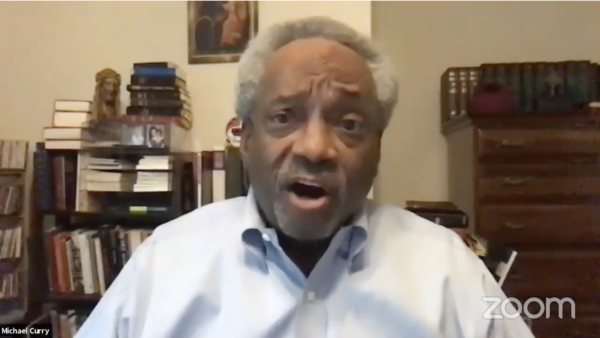 Presiding Bishop Michael Curry speaks during a virtual meeting of the Executive Council on June 8, 2020.

[Episcopal News Service] On June 8, The Episcopal Church’s Executive Council met virtually to sketch out visions and plans for the church’s future in a world that bears little resemblance to the one that existed when council last met in person, in February.

The meeting of the group tasked with enacting the policies adopted by General Convention goes through June 11 and is being held on Zoom, as was a brief special session in late April.

Presiding Bishop Michael Curry opened the meeting with a rousing, emotional address that acknowledged the suffering and anguish caused by the overlapping crises of the past three months: the COVID-19 pandemic, racial violence and police brutality against African Americans, and the government’s sometimes-violent reaction to protests.

Quoting from Isaiah 40, Curry simultaneously expressed the spiritual pain and exhaustion of this moment, the solace of faith in God, and the need for the church to double down on its commitment to justice, even “when the cameras are gone.”

“We’re not going to quit,” Curry said. “We’re going to stay the course.”

Curry praised the way Episcopalians have risen to the occasion and engaged with the various issues that have arisen in recent weeks, and he gave an impassioned and unvarnished assessment of the political and cultural forces responsible.

“We have seen a ruthless virus, a plague in the land, sickness and death and hardship visited to one degree or another on all of us, but particularly on the most vulnerable among us. And it has exposed inequities and moral wrongs that shouldn’t be in our land, or in our world.”

Curry and House of Deputies President the Rev. Gay Clark Jennings told council that the way forward will be difficult, both spiritually and practically. The church, Jennings said, must own up to “centuries of institutional complicity in slavery and Jim Crow and mass incarceration, and the economic and social practices of systemic racism.”

“When people across the nation are rising up against racial injustice, police brutality and systemic racism, we must not turn away from this deeply painful history, our history,” she told council.

The officers, chiefs, canons and chairs of the joint standing committees gave presentations on the work they have been doing to address the various challenges facing the church, and the work that is still to come.

One critical issue is budget uncertainty. Treasurer Kurt Barnes’ budget presentation showed that COVID-19 had no significant effect on income – including diocesan commitments – in the first quarter of 2020, and first-quarter expenses are generally in line with the budget. However, payments from dioceses fell significantly in April, with several dioceses deferring their April and May payments and three requesting partial assessment waivers. Stock market declines associated with COVID-19 also have taken a toll on the church’s investment portfolio, Barnes told council.

Economists predict that the United States is in for the longest and deepest economic crisis since the Great Depression, Barnes said, and the church should be prepared for economic weakness lasting five to 10 years. Because the effects of declining income may be delayed, the church must identify potential budget cuts now, Barnes and other officers said.

These potential cuts to an already lean budget could be “difficult and painful,” Curry and Jennings said, and might include staff reductions. Curry and Jennings had established an ad hoc committee to outline guiding principles in preparation for such budget cuts, which the committee presented in a resolution to council. The resolution committed to making potential budget cuts with transparency and fairness in accordance with the Way of Love. Among the principles laid out in the resolution were integrity, courage, creativity, prudence, focus, clarity and prayer.

The resolution passed unanimously, except for one vote of abstention. The Joint Standing Committee on Finance is developing a phased plan that would implement various cuts to the current triennial budget based on how much income might decline. Any reductions in the budget would be presented by that committee to be voted on by the entire Executive Council, Jennings said.

The “staged reductions” plan may be finalized during this week’s meeting of council or may be presented at another council meeting in late June or early July, said the Rev. Mally Lloyd, chair of the Joint Standing Committee on Finance.

Other topics that will be discussed this week are alternative plans for the 2021 General Convention, COVID-19’s impact on various grants and initiatives, and resolutions related to the racial disparities exposed by both the pandemic and the recent killings of unarmed African Americans by police.