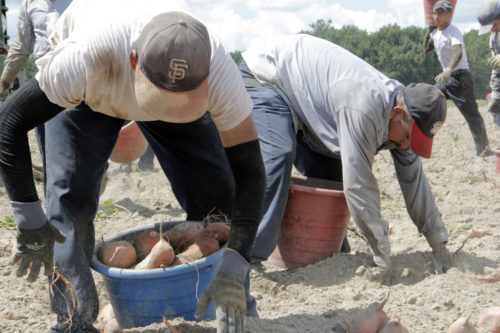 Farmworkers in North Carolina wear long pants, sleeves and gloves to work in the fields partly to protect themselves from pesticide exposure. Photo: Lynette Wilson/ENS

[Episcopal News Service] Ana wakes up at 4:45 a.m. six days a week to work on a large farm in Oxnard, California. When she arrives, she washes her hands thoroughly before putting on a pair of gloves and a face mask. She then spends a few minutes exercising to prepare her body for another long day of physical labor. By 6:30, she’s limber and ready to spend the next 10 hours stooped over and picking strawberries in the field.

Ana, her last name is withheld at her request, says her supervisors have always been strict about sanitation and safety for farmworkers, but additional restrictions have been put in place to prevent the spread of COVID-19. Before the pandemic, wearing face coverings to minimize pesticide exposure while working was optional. Now it’s mandatory, and every farmworker is given a new disposable face mask at the start of each workday.

“Now because of coronavirus, we’re not allowed to touch our cell phones while picking crops so that we don’t touch the fruit with our bare hands,” Ana told Episcopal News Service through her interpreter, the Rev. Anthony Guillén, who also serves as missioner of Latino/Hispanic Ministries and director of Ethnic Ministries for The Episcopal Church. Ana joined St. Andrew’s Episcopal Church in Ojai, California, earlier this year, where Guillén assists with the Latino ministry.

“I feel that the supervisor and managers where I work have been very attentive to the situation from the beginning,” Ana said. “They also give us regular updates about COVID-19. Thank God I don’t know anyone who has contracted the virus yet.”

Since January, more than 1.8 million Americans have been diagnosed with COVID-19, and more than 106,700 have died. To slow the spread of COVID-19, states began issuing stay-at-home orders in March, which led to a shutdown of the U.S. economy and over 40 million unemployment claims.

Meanwhile, farmworkers – mostly migrant and seasonal workers, both documented and undocumented – who largely labor behind the scenes, have joined the ranks of health care workers and first responders as essential to keeping the country functional. In response, regional Episcopal ministries serving and advocating on their behalf have stepped up their efforts.

Even though farmworkers are essential, they have historically been treated as expendable. The COVID-19 pandemic hasn’t been an exception.

“[Farmworkers are] doing work that puts their life in danger, and they’re doing it for their families and their dreams,” said the Rev. Daniel Dario Robayo Hidalgo, missioner for Latino/Hispanic Ministries of the Diocese of North Carolina. “Food is still being available during this crisis. Why? Because these people are still getting our food for us. We should treat them properly.”

Robayo is a board member of Episcopal Farmworker Ministry, a nonprofit that’s working to provide farmworkers in North Carolina with food, medicine and personal protective equipment. Despite its efforts, the ministry has been struggling to help so many people in need during the COVID-19 crisis.

“It’s been a big heartache for us that we can’t provide hand sanitizer or masks,” Robayo said. “It hurts. It can get pretty hot here in North Carolina, and we haven’t even talked about hurricane season yet with this pandemic. Lord have mercy.”

Robayo told ENS that too many employers in North Carolina don’t offer medical care or personal protective equipment to farmworkers. Not only that, farmworkers in the state recently said in a press conference over Zoom that they still have to work shoulder to shoulder at a fast pace without any gloves or face masks. Additionally, most farmworkers share small living spaces and travel together to go to work and run errands.

These conditions make it easy for the virus to spread among workers going in and out of fields and meat processing plants, and some farmworkers in North Carolina have already been infected.

Episcopal Farmworker Ministry recently raised $60,000 to continue helping farmworkers and their families during the COVID-19 pandemic. The money will be used to provide a contactless food pickup service and financial aid. The ministry is also offering remote mental health support and immigration aid, since most farmworkers are either undocumented or in the country as part of the H-2A visa program for temporary agricultural workers.

Even though farmworkers are considered essential during the COVID-19 pandemic, the Trump administration hasn’t enforced safety measures recommended by the Centers for Disease Control and Prevention, further amplifying the need for farmworker advocacy nationwide.

In upstate New York, advocates with Rural & Migrant Ministry, an Episcopal-affiliated nonprofit that has been assisting rural and migrant communities since 1981, are focusing on worker rights and safety.

“The stimulus checks were supposed to go to people working in every industry, but a lot of farmworkers were ineligible because they’re undocumented,” said Deirdre Cornell, coordinator of the Hudson River/Catskill region of Rural & Migrant Ministry. “I think maybe this situation will bring awareness and a new recognition of immigrant and working-class people as essential workers. Their rights are ignored, and it should really be emphasized that there’s no safety net for them.”

In addition to calling on New York state lawmakers to ensure farmworkers’ health and safety, Rural & Migrant Ministry has been collecting reusable masks to distribute to farmworkers and their families. So far, the ministry has collected more than 6,000 masks.

Rural & Migrant Ministry, along with other nonprofits that directly serve farmworkers in New York, will sponsor several caravans across the state on May 31 to provide support and solidarity to food chain workers. Christians are encouraged to attend as an opportunity to celebrate Pentecost.

Despite the pandemic, advocates for both Episcopal Farmworker Ministry and Rural & Migrant Ministry continue to focus on preexisting concerns for farmworkers, including food insecurity, access to health care and child care, and immigration reform.

“Farmworkers come with this dream of being able to improve their lives,” Robayo said. “They have all this energy and enthusiasm that they’re helping their families, but it’s hard to make a proper living in it. Farm working is a poverty-trapping cycle.”

Individual farmworkers typically earn between $15,000 and $17,499 a year for their labor, which includes spending all day, often in extreme heat, picking produce to ship to grocery stores across the country. Many farmworkers can’t afford to buy food for themselves and their families because their wages place them well below the federal poverty line.

Extreme heat is a problem for farmworkers in San Joaquin Valley, California, which has suffered from intense drought in recent years. Many farmworkers in the region are labor trafficking victims. The Diocese of San Joaquin supported immigrants and anti-trafficking efforts before COVID-19, but now it’s taking further steps to include farmworkers in its advocacy work.

“We can’t assume what farmworkers need, so now we’re going to the farms and asking, ‘How can we help you?’ Some workers we spoke with said that they’re having trouble getting access to health care and COVID-19 testing. No surprise there,” said San Joaquin Bishop David Rice, who has been visiting farmworkers in the region during the pandemic with the Rev. Nelson Serrano Poveda, a deacon and the diocese’s Latino/Hispanic missioner.

“We haven’t communicated with farmworkers in the extent that we should,” Rice said. “We have a long way to go.”

Some nonprofits help feed farmworkers and their families to minimize their daily expenses. In California, The Abundant Table co-op provides fresh organic fruits and vegetables to food-insecure farmworkers living in the area. Founded by an Episcopal and Lutheran ministry in 2006, the nonprofit also donates excess food to local food banks and faith-based organizations.

Food insecurity is just one of several injustices that farmworkers in the United States have been struggling with for decades. In 1962, César Chávez and Dolores Huerta founded the United Farm Workers of America to peacefully fight for basic human rights for farmworkers, including fair wages and access to clean water, education, food, health care and housing. But those hard-won victories are still few and far between for most farmworkers, many of whom remain undocumented.

Ana said that, in light of COVID-19, she wants to support her family to an even greater extent than she already has been since starting her career as a farmworker nearly 13 years ago as a minor.

“I would like to help my family more, but I can’t because I’m not a citizen,” she said. “I wish my company or the U.S. government would offer me some sort of legal work status.”