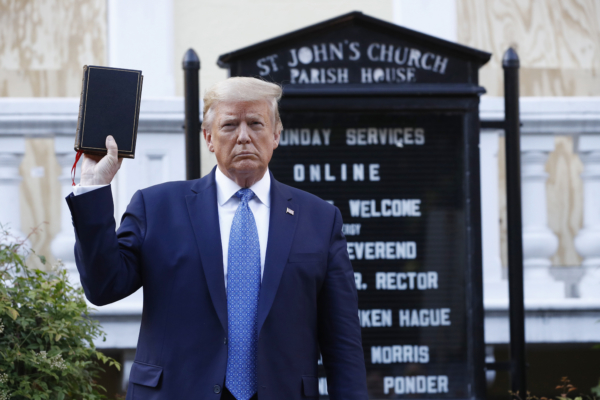 President Donald Trump holds a Bible as he stands outside St. John’s Episcopal Church, across from the White House, in Washington, D.C., on June 1, 2020. Photo: Patrick Semansky/AP

[Episcopal News Service] Leaders from The Episcopal Church have condemned the reported use of tear gas and projectiles to clear clergy and protesters from the area around St. John’s Episcopal Church, across the street from the White House, so President Donald Trump could use it for an unauthorized photo op on June 1.

Trump “used a church building and the Holy Bible for partisan political purposes. This was done in a time of deep hurt and pain in our country, and his action did nothing to help us or to heal us,” Presiding Bishop Michael Curry said in a statement.

“I am outraged,” the Rt. Rev. Mariann Budde, bishop of Washington, told The Washington Post. “Everything [Trump] has said and done is to inflame violence. We need moral leadership, and he’s done everything to divide us.”

Minutes before the photo op, Trump had spoken at the White House, urging mayors and governors to use the military to “dominate the streets” and end the widespread protests over systemic racism and police brutality. As he spoke, police and the National Guard pushed hundreds of nonviolent protesters and journalists out of Lafayette Square – between the White House and St. John’s – by firing projectiles, flash grenades and tear gas at them at the orders of Attorney General William Barr, The Washington Post reported.

At least one Episcopal priest was among those tear-gassed. At least 20 priests and a group of laypeople were at the church earlier in the day “to serve as a ‘peaceful presence in support of protesters,’” handing out water, snacks, and hand sanitizer. The Rev. Gini Gerbasi, rector of a different St. John’s Episcopal Church (in Washington’s Georgetown neighborhood), was packing up – dressed in clerical garb – when she and a seminarian were tear-gassed by police in riot gear, she said.

“I was suddenly coughing from the tear gas,” she told Religion News Service. “We heard those explosions and people would drop to the ground because you weren’t sure what it was.”

Gerbasi said she heard people crying out in pain, having been hit by projectiles, as she fled.

“They turned holy ground into a battleground,” she told RNS.

Trump then walked across the square to the church, which sustained minor damage in a fire the previous night, and posed for cameras holding a Bible before returning to the White House. He did not go inside, read from the Bible or meet with any clergy. Trump does not regularly attend services at St. John’s or any other church. He has been inside St. John’s twice since his election, NBC News reported.

Every president since James Madison has attended a service – some as regular members – at St. John’s, the 204-year-old “church of presidents” where one of the pews is reserved for the president.

Budde said she was not asked or even notified that the area around the church would be tear-gassed and used as a photo op.

“The symbolism of him holding a Bible … as a prop and standing in front of our church as a backdrop when everything that he has said is antithetical to the teachings of our traditions and what we stand for as a church — I was horrified,” she told Religion News Service. “He didn’t come to pray. He didn’t come to lament the death of George Floyd. He didn’t come to address the deep wounds that are being expressed through peaceful protest by the thousands upon thousands. He didn’t try to bring calm to situations that are exploding with pain.”

Budde has publicly criticized Trump before. Last summer, she and other church leaders in Washington wrote a scathing statement denouncing Trump’s “dehumanizing” language when he insulted the city of Baltimore and its then-congressman, the late Rep. Elijah Cummings.

In a Facebook post, the parish leadership said they were “shocked at the surprise visit from the president this evening and even more appalled at the violent clearing of Lafayette Square to make the visit possible. … We stand with those peacefully protesting the tragic and unnecessary death of George Floyd, and the far too many who came before him. We pray that our nation finally confronts its history of racism and, as a result, can fully embrace the peace of God that passes all understanding.”

Other Episcopal bishops echoed Budde’s condemnation of the incident.

“What President Trump did in front of St. John’s Episcopal Church, Lafayette Square, on the evening of June 1 was disgraceful and morally repugnant,” the bishops of New England wrote in a statement. “Displaying a Bible from which he did not quote, using as a mere backdrop an Episcopal church where he did not pray, and – more callously – ordering law enforcement to clear, with force and tear gas, a path through demonstrators who had gathered in peace, President Trump distorted for his own purposes the cherished symbols of our faith to condone and stoke yet more violence.”

“We are confident that the leaders of our church in Washington would have been happy to meet the president at Saint John’s and pray with him for our country, for the lost, for the grieving, for the long-suffering, and for all those who never weary of striving for the birth of the Beloved Community, had he asked,” the bishops of New York wrote. “We are, though, unprepared for our sacred sites to be appropriated to other and political purposes, just as we were unprepared for a speech so filled with recrimination, so punishing, and so uncomprehending of the depth of the pain and suffering across the country he was elected to lead.”

“The people of the church you stood in front of last night pray for you every Sunday,” Bishop J. Russell Kendrick of the Diocese of the Central Gulf Coast wrote in an open letter to Trump. “I know they do, because I am a bishop in the same denomination, and the churches in my diocese pray for you, too. Congregations full of liberal, conservative, and independent people of all races and all orientations. … When you parted a way through the crowds, crossed the street in order to take a photo, stood on the steps of a church, and held up a Bible, it felt little like what I love, know and strive for as a child of God.”

The incident also has drawn condemnation from Christian leaders beyond The Episcopal Church.

“The president used federal troops to clear a path through peaceful protesters in order to stand before an Episcopal church make a statement and hold up a bible,” Presiding Bishop Elizabeth Eaton, head of the Evangelical Lutheran Church in America, said on Twitter. “Not only was this manipulative, it was desecration.”

The president used federal troops to clear a path through peaceful protesters in order to stand before an Episcopal church make a statement and hold up a bible. Neither the priest nor the bishop were consulted or warned. Not only was this manipulative it was desecration.

Reaction from some Roman Catholic leaders was particularly sharp in light of Trump’s scheduled visit on June 2 to the John Paul II National Shrine in Washington.

“I find it baffling and reprehensible that any Catholic facility would allow itself to be so egregiously misused and manipulated in a fashion that violates our religious principles,” Washington Archbishop Wilton Gregory said in a written statement that also referenced the president’s photo op in front of St. John’s. He added that the late Pope John Paul II “certainly would not condone the use of tear gas and other deterrents to silence, scatter or intimidate them for a photo opportunity in front of a place of worship and peace.”

St. John’s announced on social media on June 2 that it will continue to invite all to “stand in prayerful solidarity and witness for racial justice and healing” on the church’s patio every day from 3 p.m. until curfew.