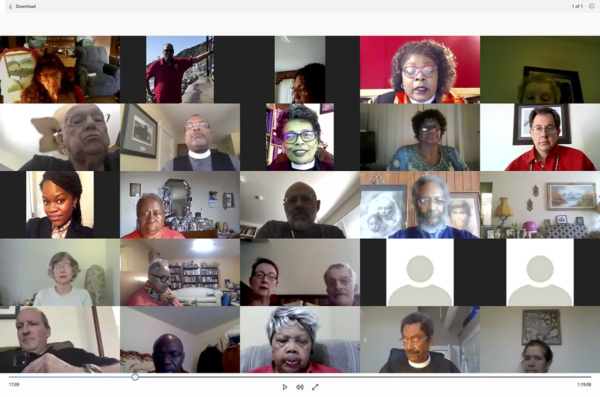 The Union of Black Episcopalians hosted a “Vigil for Racial Justice and the Healing of Our Nation” online on May 31. Screenshot: Lynn Collins

[Episcopal News Service] With voices echoing those of 1960s’ civil rights leaders, a rainbow of black, white, Asian, Latino and Native Americans from across the church swelled to the 300-participant online capacity for a “Vigil for Racial Justice and the Healing of Our Nation,” hosted on Pentecost by the Union of Black Episcopalians and joined by Presiding Bishop Michael Curry.

The May 31 vigil came on the sixth day of nationwide protests sparked by the death of George Floyd, the latest African American to die in police custody.

UBE National President the Very Rev. Kim Coleman led the prayers, lament, witness, and call for racial justice, invoking the names of Floyd and three other African Americans — Breonna Taylor, Sean Reed and Ahmaud Arbery — who were recently killed by police or vigilantes. The vigil was intended as a sacred conversation in their memory and for “thousands of others like them whose voices have been silenced and who have been robbed of their lives over the past 400 years by the sin of racism,” Coleman said.

These assaults, she said, “have broken our hearts, erupted onto our streets and crippled cities across our country.”

“‘We are sick and tired of being sick and tired,’” Coleman said, quoting civil rights activist Fannie Lou Hamer. “‘That’s why we’ve come back to that place where people of faith know to go when our backs are against the wall. We turn to God through prayer and we turn to community through witness.’”

“We’ve run a long race, and this race will not be over until all of God’s children know the glorious liberty of the children of God,” Curry told those gathered.

Floyd, 46, died during a May 25 arrest in Minneapolis, Minnesota. On May 29, Derek Chauvin, the officer who pressed his knee to the back of Floyd’s neck while he lay on the ground, was arrested and charged with murder and manslaughter. In an 8-minute video captured by a bystander and shared widely on social media, Floyd could be heard saying “I can’t breathe,” the same words Eric Garner spoke in 2014 before he died in the hands of police in Staten Island, New York.

Garner’s death was also captured on video and led to nationwide protests over the use of excessive police force and the creation of the Black Lives Matter movement. New York Police Officer Daniel Pantaleo was never charged in Garner’s death, though an administrative judge found Pantaleo guilty of using a banned chokehold. The Justice Department dropped federal civil rights charges against Pantaleo last July. A month later, Pantaleo was fired from his job.

Dreasjon “Sean” Reed, 21, was shot May 6 after he was stopped by Indianapolis Metropolitan Police who said they had observed him driving recklessly. His death was livestreamed on Facebook.

Breonna Taylor, 26, an emergency room technician, died March 13 when Louisville, Kentucky, police used a battering ram to break down the door of her apartment. During the subsequent confrontation, Taylor was shot eight times.

Ahmaud Arbery, 25, was killed February 23, while jogging in Brunswick, Georgia, a coastal city about 250 miles south of Atlanta. Two armed white men chased him, and after a struggle, Arbery was shot twice. A prosecutor, who later recused himself from the case, had argued that the two, Gregory McMichael, 64, and his son Travis McMichael, 34, were acting within the state’s citizen arrest and self-defense laws. The McMichaels were arrested May 7 and charged with murder and aggravated assault after a New York Times investigative report.

Representatives of the UBE’s six regional chapters offered prayers and reflections during the hour-long vigil. The Rev. Hershey Mallette Stephens described fears for “my own family, my father, my brothers and, one day, my tiny, smiling innocent son Jeremiah, if I continue to ignore this petrifying wound” of racism.

“We call out in holy rage for all those murdered by the state … for the 140 million poor and low-wage people now living in the wealthiest nation in the history of the planet,” said Stephens, who is dean of the chapel and spiritual life at St. Augustine’s University in Raleigh, North Carolina. St. Augustine’s was founded in 1867 by the Episcopal Diocese of North Carolina to make education available to newly freed slaves.

She invited participants to join a national call for moral revival scheduled online for June 20, 2020, organized by the Poor People’s Campaign, “because somebody’s been hurting our family and it’s gone on far too long. We won’t, we can’t, we refuse to be silent anymore.”

The Rev. Ellis Clifton Jr., UBE Midwest regional director, reminded the gathering that even Jesus ran out of patience and cleared the temple of the moneychangers. Although not condoning violent protest and property destruction, “‘There comes a time when tired people have had enough. And they rise up, they act. For many years they have shown amazing patience. But we come here tonight to be saved from patience that makes us patient with anything less than freedom and justice,’” Ellis said quoting Martin Luther King Jr.

‘What white people can do’

It is up to white people to change the narrative, said the Rev. Mike Kinman, rector of All Saints Church in Pasadena, California, in the Diocese of Los Angeles.

“We need to learn the history — the real history — and we need to tell the history … un-whitewashed … that there have been far more, far more instances of violence perpetrated against black people by white people than the other way around,” he said.

“It is up to us to listen and to hold space for black and brown people as they express the centuries of trauma they are carrying in their bodies and spirits because of that history.”

Kinman was dean of the Christ Church Cathedral in St. Louis, Missouri, when 18-year-old unarmed Michael Brown was shot and killed Aug. 9, 2014, by a white police officer. His killing sparked weeks of protest and civil unrest.

“What is playing out right now in this country will continue to happen over and over again until we change something. We need to make some new history,” Kinman said.

Racism has infected the American economy, systems and structures “and continues to damage us all,” Stokes, the New Jersey bishop, said, acknowledging the country’s history of racism and its institutionalization.

“Racism is a white problem, the effects of which more often than we can measure bring great harm and often premature death to people of color. [It will take] great intentionality, genuine sacrifice and real resolve by whites in this country to help dismantle racism and its structures to assist in bringing about a just society,” he said. “It’s time for white America to wake up fully to the truth of our racism and oppression and own it. Until we do, we will not be either well or great as a nation.”

Transformation is possible by putting faith into action and by confronting educational and health care inequality, as well as lack of economic and other opportunities, said John Robertson, chair of UBE’s Mental Health Task Force. “You’ve heard the expression, ‘making lemonade out of lemons,’ but transformational growth is changing the lemonade so that it sustains us through the rest of life,” he said.

Prayer is action, according to the Rev. Sandye Wilson, a UBE adviser. She said white Episcopalians must stand up, speak up, show up and act. “It’s not enough to tell me how close you are to me and how much this hurts you. You have work to do.

“Prayer is voting. Prayer is getting others out to the polls. Prayer is naming systems that oppress and being unafraid. Prayer is challenging one another in our own internal opposition to not look down on those who have taken to the streets and say, ‘That’s not the way I would do it, and they are not really related to me.’ We are all in this boat together, and those that are taking to the streets in peaceful demonstrations are exercising their right to pray. Will you join us in this movement dear friends?

“The time is now. We need moral courage to stand up and speak up. It’s in our hands, friends. Jesus gave us all we need. Let our prayer be our action, let our action be our prayer and may God go with us and bless us always,” Wilson said.

– The Rev. Pat McCaughan is a correspondent for the Episcopal News Service. She is based in Los Angeles, California.