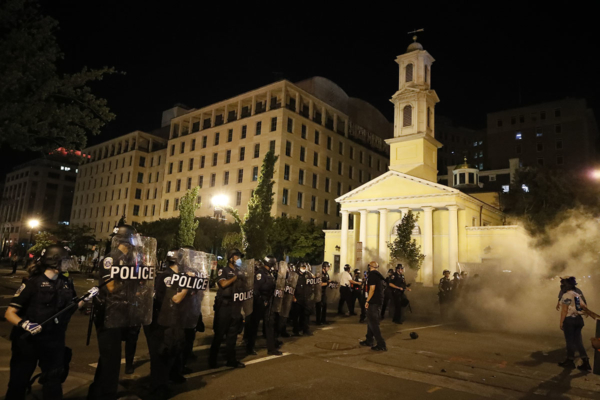 A police line forms by St. John’s Episcopal Church in Washington, D.C., on May 30, as demonstrators gather to protest the killing of George Floyd. Photo: Alex Brandon/AP

[Episcopal News Service] St. John’s Episcopal Church, the 204-year-old “church of presidents” across the street from the White House in Washington, D.C., sustained minor damage during riots that followed peaceful protests against racial violence and police brutality on the night of May 31.

Every president since James Madison has attended a service – some as regular members – at St. John’s, a national historic landmark where one of the pews is reserved for the president.

Just after 10 p.m. on Sunday, someone set a fire in the basement of the parish hall, which firefighters quickly extinguished, The Washington Post reported. The fire was contained to a nursery room, although there was smoke and water damage to other areas of the basement, according to the Rev. Rob Fisher, the church’s rector.

“We’re very happy to report that the rest of the church and parish house is untouched except for some exterior graffiti, which the city’s graffiti team has already covered up,” Fisher and the church’s wardens wrote in a June 1 email to parishioners.

Fisher told Episcopal News Service that the nursery room is “completely destroyed,” but it could have been much worse. Nobody was hurt and none of the church’s “irreplaceable” historical items were damaged, he said in an interview.

Earlier in the day, over 1,000 protesters had marched peacefully through the area, demonstrating against the killings of African Americans by police, including George Floyd. The Rt. Rev. Mariann Edgar Budde, bishop of Washington, joined parish leaders at the church to show support for the protesters.

“There are a lot of things to be heartbroken about, but obviously we wanted the church to be a place of haven and safety,” she told The Post.

As night fell and police tried to clear protesters from the area, incidents of vandalism and violence spread across the city. Some rioters looted businesses, set fires and clashed with police in front of the White House.

Fisher rushed to the church “with a sinking feeling” after seeing videos of fires burning in nearby buildings and then in the church itself.

“But then when I got here, honestly, there was a lot to be grateful for,” he told ENS. The church’s windows are being boarded up to protect it from further damage, he said.

He and Budde expressed gratitude that no one was harmed by the fire and stressed that the systemic racism and police brutality that ignited the recent unrest are far bigger concerns.

“There’s understandably attention on us,” Fisher told ENS, “but I want to point the attention back to where it really should be, which is the purpose of the protests, and the people who did what they did to the church do not represent the majority, who are here for reasons that we totally support.”

“We will rebuild the church, while keeping our focus on the deeper wounds of this country that we must heal,” Budde wrote on Facebook.

“I am saddened to learn about the damage to St. John’s Church,” Presiding Bishop Michael Curry said in a statement. “But thankfully, no one was hurt. This must strengthen our resolve to live by the way of a kind of love that seeks the good and the well-being of others of our society. And for ourselves. This way of love is the way.”