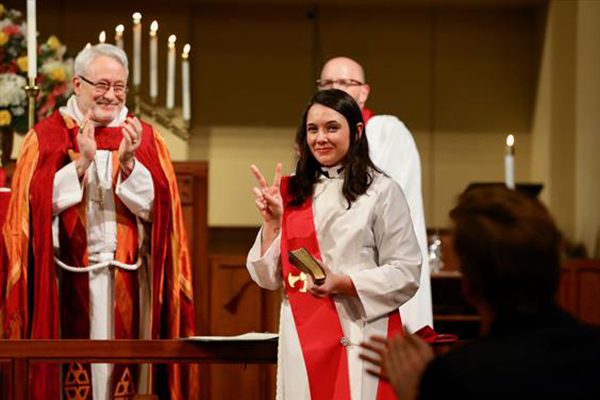 [Episcopal News Service] The Rev. Caitlyn Darnell is one of The Episcopal Church’s newest deacons, and in the face of the ongoing coronavirus pandemic, no one should doubt her enthusiasm for ordained ministry.

“I feel called into it,” said Darnell, who serves as director of formation and mission at St Martin’s-in-the-Fields Episcopal Church in Columbia, South Carolina. “In these kinds of feet-to-the-fire times, that call has only intensified. I want to run even faster into the middle of all of it.”

This year, however, preparations for Episcopal ordination services have run up against public health precautions intended to slow the spread of the coronavirus, now blamed in the deaths of nearly 100,000 Americans. Dioceses wishing to ordain new priests and deacons have had to minimize attendance, maximize physical distances, and eliminate all but the one moment of human contact required by the Book of Common Prayer: “The Bishop lays hands upon the head of the ordinand.”

Darnell was one of the first Episcopalians to be ordained under pandemic conditions – “the canary in the coal mine,” as she described herself in an interview last week with Episcopal News Service. Darnell and Upper South Carolina Bishop Andrew Waldo were joined March 19 by just eight other people in the church, with hundreds more watching online. It wasn’t what she expected, but she explained, “The intimacy of it was beautiful in a different way.”

Since then, in-person Sunday worship has been suspended at St. Martin’s and most other Episcopal churches in the United States, but dioceses across the church have continued to find ways of welcoming priests and deacons like Darnell into ordained ministry.

“We were planning to do it big,” said the Rev. Anna Page, 25, who was ordained in the Raleigh service along with the Rev. Joseph Sroka. They cheerfully accepted the need to limit attendance to no more than 10. “This pandemic is a humble reminder that so much is out of our control,” Page said. 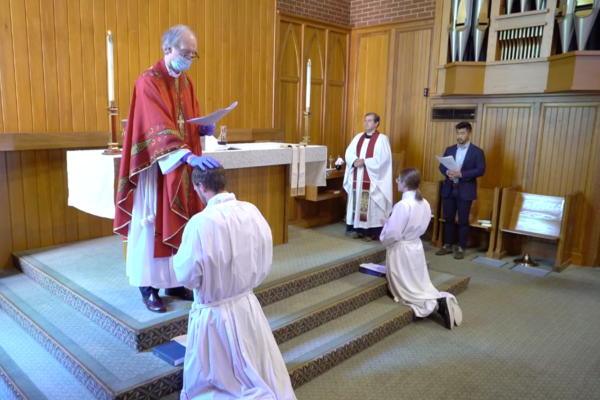 Fewer than 10 people were present April 26 when the Rev. Steve Holt was ordained to the priesthood in the Diocese of Maryland by Assisting Bishop Robert Ihloff, who engaged in multiple rounds of hand-washing during the service. Three more Maryland ordinations are planned for June.

Los Angeles Bishop John Harvey Taylor has scheduled six ordinations on June 13 in an outdoor service at the bishop’s residence in Pasadena, California. As has become standard for such ordinations, it will be livestreamed for those who can’t attend in person.

“Wherever that festival day finds us, we will all be in the temple together, blessing God,” Taylor said in a May 21 pastoral letter to the diocese.

Two deacons were to be ordained in late March by Southwestern Virginia Bishop Mark Bourlakas, but the diocese postponed that service as stay-at-home orders became widespread in Virginia and across the country. With coronavirus cases and deaths nationwide now trending gradually downward and states in various stages of reopening, Bourlakas rescheduled the ordination service for May 26.

“We’re all facing in the church a unique and challenging moment, and these ordinands will be marked in their ministry by this challenging moment,” Bourlakas said. “But the most important thing is the holy spirit will be present and they will be ordained.”

Darnell, 29, was the last of her 2018 graduating class at Yale Divinity School to be ordained. Her fellow graduates couldn’t come celebrate with her as originally planned, but she remains positive.

“It still counts,” she said. “As I’ve been saying to my friends, no takesy-backsies.”

Darnell joined St. Martin’s a year ago, and her ordination had been on the calendar since early this year, before the congregation realized normal parish life was about to be upended.

In mid-February, Darnell was among five parish leaders who attended the CEEP Network conference in Louisville, Kentucky, and the Rev. Mitch Smith, rector of St. Martin’s, attended a pre-conference workshop for rectors and deacons. After the conference, at least eight attendees tested positive for COVID-19, the disease caused by the coronavirus, including participants in the pre-conference workshop.

Although Smith, Darnell and the others from St. Martin’s remained healthy, the news of other clergy falling ill brought home the seriousness of the escalating national public health crisis, and it quickly shook up plans for Darnell’s ordination.

“The week leading up to the ordination was really exhausting because everything just kept changing by the minute,” Darnell said. Her preferred preacher was in a high-risk category for contracting the coronavirus, so Smith agreed to step into that role instead. One of her mentors had to cancel travel plans, and her presenter couldn’t make it either. “The world was really turning upside down.” 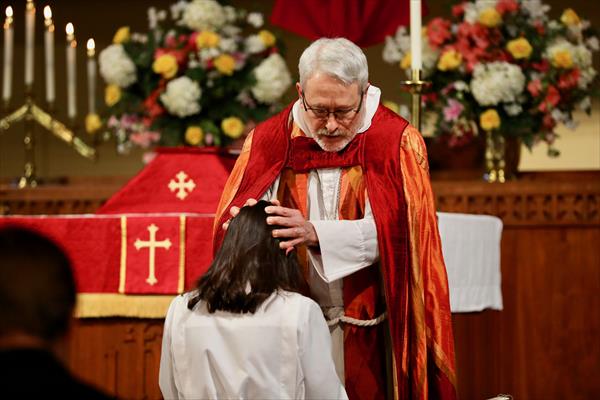 Upper South Carolina Bishop Andrew Waldo ordains the Rev. Caitlyn Darnell as a deacon on March 19. Other than the required moment of laying on of hands, participants in the service followed physical distancing guidelines to reduce the risk of virus transmission. Photo: Scotty Peek/St. Martin’s

Smith also knew a large ordination service for Darnell was no longer possible. About 300 people typically attend Sunday services at St. Martin’s. “I’m confident for her ordination it would have been Easter Sunday attendance. It would have been 600 people and standing room only,” Smith told ENS. Now, they were focused on meeting the minimum ordination requirements while also preparing to livestream all of the congregation’s future worship services. The congregation hasn’t worshipped in the church since the Sunday before Darnell’s ordination.

“My goal was to get the ordination done for Caitlyn, on Caitlyn’s behalf,” he said. “I knew that after the ordination, I’d probably shut everything down.”

As plans changed, Darnell said the inability to host a big gathering for her ordination was never a reason to postpone.

“There wasn’t ever a point when I thought it wasn’t going to happen,” she said, “because my view of ordination, and the view of the people who have been supporting me, is the party isn’t the purpose.”

Page, the North Carolina deacon, is training to become an Army chaplain. She accepted a curate role at St. Michael’s after graduating from Duke Divinity School in December 2019 and was sending out invitations to her ordination when the national surge in coronavirus cases raised doubts about the April 4 service.

The city of Raleigh ordered a 10-person limit on gatherings, and “even the week before the ordination, we were still uncertain as to whether it would happen,” Page said.

Sroka, too, saw that date as “kind of a placeholder” as he braced himself for a postponement that never came. To keep the ordination on schedule, his wife and sponsoring priest were his only guests. Though his three young sons couldn’t attend, he was at peace with the decision.

“I just thought of the ordination kind of sacramentally, that ordination is kind of an outward and visible sign of an inward grace,” Sroka, 36, told ENS.

Since graduating from Duke Divinity in 2014, Sroka has focused on serving people who are homeless, most recently through Community of the Franciscan Way, a diocesan farming mission in rural North Carolina. He sees ordinations during the pandemic as symbolic of the church’s work in the world, and a more modest service rightly emphasizes the ministry over the individual.

“The church is still going on and meeting needs and being with people,” he said. “In this time of this pandemic, you can’t really separate the calling as a deacon from the broader mission of the church to the world.”

On the Wednesday before the Saturday ordination, Rodman met with Page and Sroka by Zoom for a pre-ordination retreat, which helped put them at ease. A mentor also reassured Page that the communion of saints would be present, even if some of her loved ones couldn’t be.

“I remember feeling just in awe, out of humility and respect and appreciation, that the ordination could even happen,” she said. “And even though there were only 10 of us there, I could still feel the support and the love from people who were praying for me.”

The ordination and consecration of Episcopal bishops also will resume this weekend. Georgia Bishop-elect Frank Logue will be consecrated May 30 in a small service in Savannah, with Georgia Bishop Scott Benhase as chief consecrator. Later in the day, the Rev. Poulson Reed will be consecrated as bishop coadjutor of the Diocese of Oklahoma, a transitional role that puts him in line to take over when Oklahoma Bishop Ed Konieczny retires at the end of the year.

Two more bishop consecrations are scheduled for June 6, in Minnesota and Missouri. A fifth will be held June 13 in Alabama. All five of the dioceses are tightly limiting the number of participants while allowing Episcopalians to watch via livestream.

New priests and deacons ‘prepared for the work ahead’

Benhase already has presided at two ordination services during the pandemic. He ordained the Rev. Ranie Neislar as a deacon April 26 in a service at St. Paul’s Episcopal Church in Augusta, which was livestreamed on Facebook. Logue was among the livestream’s viewers who wished Neislar well from home.

And Logue was one of about a dozen people who attended the May 9 ordination of the Rev. Nathan Wilson and the Rev. Kevin Veitinger at St. Michael and All Angels Episcopal Church in Savannah. The pair joined what Veitinger calls this “weird little club” of priests ordained during the pandemic.

“What I perceived going in as being disappointing turned out to be really and truly a special moment, more than I could have ever imagined,” Veitinger told ENS.

Wilson’s initial disappointment didn’t last long either. “There’s still the work of ministry to be done, whether we get the grand celebration or not,” he told ENS. “The ordination isn’t about the celebration. … It’s about being prepared for the work ahead.”

And though a formal reception was canceled, family, friends and members of their congregations lined up outside the church to shower them with applause after the service. “I just broke down and started crying,” Veitinger said.

Wilson, 27, has served at St. Michael’s as an intern and then a deacon since graduating from Duke Divinity in 2018, so he was able to celebrate Holy Eucharist for the first time the day after his ordination, leading the livestream service from the church.

Veitinger, 44, left Savannah with his family right after the ordination to take on the new role of rector at All Saints’ Episcopal Church in Briarcliff Manor, New York. With a pre-pandemic Sunday attendance of about 60, the church is not yet set up for livestreaming, and Veitinger has not been able to celebrate his first Eucharist yet.

“I have a very long view of this,” he said, “and I’m completely willing and able to be patient as this unfolds and look at it as a marathon instead of a sprint.” 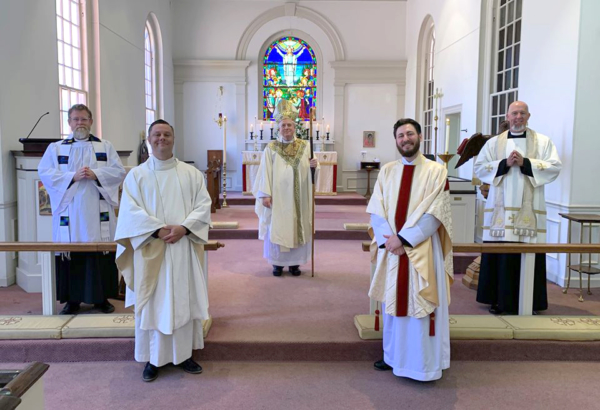 Darnell, the South Carolina deacon, was able at her ordination to perform the role of setting the table for Holy Eucharist – after cleaning her hands, of course. “There was bountiful hand sanitizer,” she said.

For the months since her ordination, she has continued to lead formation efforts at St. Martin’s, which primarily have focused on helping parishioners turn to scripture for comfort. Much of her work is online. “There hasn’t been a point of my ordained ministry that hasn’t been virtual at this point,” she said.

Darnell is scheduled to be ordained to the priesthood in the fall, but that planning is still far off. She just hopes that it happens. “That’s all I can pray for,” she said.

Society isn’t likely to be reopened enough for a big celebration by then, “and that’s perfectly fine,” she said. “I’ll have a lifetime of ministry to get to throw a party.”