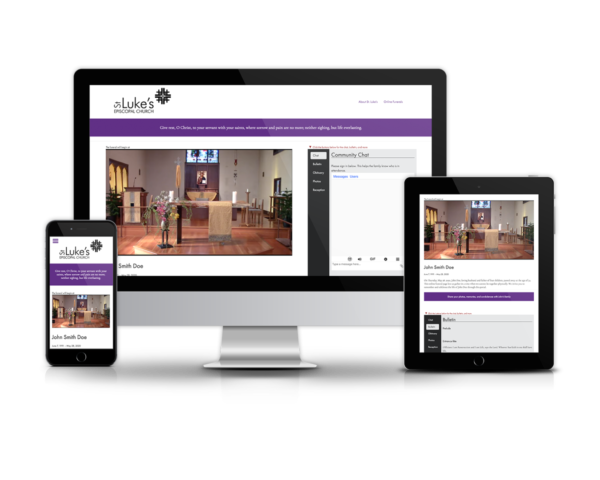 [Episcopal News Service] As St. Luke’s Episcopal Church in Renton, Washington, rapidly transitioned to online services during the early stages of the COVID-19 outbreak in the Seattle area, its rector soon saw an unfilled need. While livestream Morning Prayer provided a suitable, albeit short-term, substitute for the usual Sunday Eucharist, there wasn’t a readily available blueprint for mourning and honoring the dead.

“As we were putting those things together, we had a person die,” the church’s rector, the Rev. Kevin Pearson, told Episcopal News Service. “And we were starting to think about – well, what do we do? And what do [the relatives] do?’ … We’re going to wait six months? Or, we don’t really know how long. So all of it started coming together at once.”

The solution that Pearson and his staff developed is an example of the new ways of doing church that are emerging amid the devastation and everyday disruption of COVID-19. Physical distancing restrictions mean that many people at the end of their lives – whether they have COVID-19 or not – are dying alone, and some priests have adapted the sacrament of last rites to be administered by phone or FaceTime.

Funerals are trickier, given that they typically involve large groups congregating in one place. Many churches are postponing them indefinitely or limiting them to graveside services for a few immediate family members. And while some are performing them online on a case-by-case basis for parishioners, St. Luke’s has developed a streamlined platform for designing and organizing online funerals and is offering the services to anyone, anywhere, who wants them.

Launched this week, the service offers families an Episcopal funeral rite for their loved one, performed by Pearson at St. Luke’s and livestreamed. For the $750 basic funeral service, families can choose the readings and gather on a dedicated webpage to view the service live, chat with each other and share photos and remembrances. For additional fees, many options for customizing the funeral are available, including a choice of music and performers, reflections or performances by loved ones, a full Zoom reception and a remembrance video. 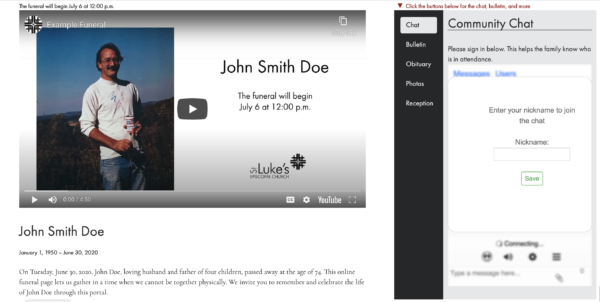 This sample page shows what an online funeral setup looks like. Image courtesy of St. Luke’s

For Pearson, who has a doctorate in liturgy, the idea of doing virtual funerals was initially not appealing.

“I care a lot about how people gather, and quality of ritual,” he told ENS. “And so I was particularly feeling a little – what many clergy might feel, like, ‘This is faux. This isn’t the real thing.’ And I don’t think it’s the intended thing, but I am seeing now how in many situations the real thing is not being done. … Very often it’s not possible. So do you just not do anything? So this is at least something, and it’s powerful.”

Concerns about the pastoral needs of those who had lost a loved one outweighed the initial discomfort at the idea of digitizing an ancient ritual. Pearson, a former chaplain at Seattle Children’s Hospital, has been “around a lot of grief” and knows how important rituals are in that first week or so after a death.

“It’s very familiar turf to me,” he said. “This is so crucial, that there is a window of emotional time that needs to be responded to.” 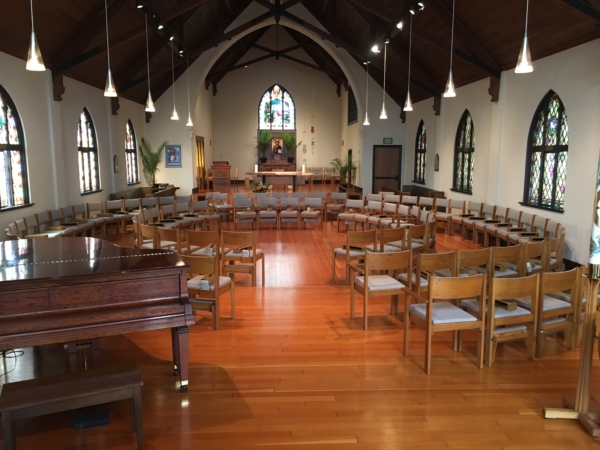 As Pearson and his staff were developing the online funeral platform, his friend’s brother in Ohio died. Wanting to see how an online funeral would work in real life, he made the family an offer.

“There was no way for people to gather. And I said, ‘Hey, we’re working on this idea. Could we use your situation as a test?’”

The family accepted the offer, and the experience exceeded Pearson’s expectations – so much that he stopped referring to the idea as a “virtual funeral,” because nothing about it felt virtual.

“It was very, very moving,” Pearson said. “The family was amazed. They were in New York, they were in California, they were out in the sticks in Ohio, they were in Columbus, and we went to the Zoom reception, people were wiping their eyes – I mean, they were just so thankful. It was a real funeral.”

Pearson increasingly realized that the online funeral could be more than just a temporary substitute for an in-person funeral, noticing that although it had its drawbacks, it also had advantages.

“While it isn’t anything like gathering normally in one place, there are actually some things that are nicer about it,” he told ENS.

At crowded funerals, for example, it can be difficult to connect with everyone. Although Zoom removes the in-person element and the spontaneity of one-on-one conversations, it can allow for more intentional time with each other.

“I would say that was actually – in my experience – that was better than being in person,” Pearson said.

Perhaps more significantly, Pearson realized that the benefits of an online funeral went beyond the pandemic – that it could offer families who could not afford to travel to attend or even hold a funeral the chance to mourn together in a dignified way.

“This kind of came out of our times, and then as we got more deeply into it, we realized that this isn’t just a COVID thing. People don’t do funerals for a whole lot of reasons.”

The church kept the basic fee affordable, but high enough to cover the overhead costs associated with producing the funerals, like staff time and tech resources. Pearson is planning to offer an option to donate to cover the costs of funerals for those who may not be able to afford them.

Pearson expects that most funerals will be for people not associated with the parish and recognizes the potentially sensitive issue of serving people in another parish or diocese.

“I asked my bishop about our services crossing jurisdictions, and he didn’t see an issue,” Pearson said. “Nevertheless, I want to be especially sensitive to the pastoral needs of the people we serve and, in my mind, that means they’re being supported by their local clergy. I don’t see our service as superseding the local pastoral role. It is simply something we are able to offer and that fulfills a real and imminent need.”

Pearson knows that an online funeral isn’t for everyone, and even he was skeptical about its suitability at first. But as to the question of whether it is still a “real” funeral, Pearson now has a clear answer.

“I may never have considered doing this in an online way without the unique circumstances that we’re living with,” Pearson told ENS. “If someone had told me, ‘What about an online funeral?’ I would have said, ‘That’s crazy.’ And yet, having seen it, done it, it was all real.”