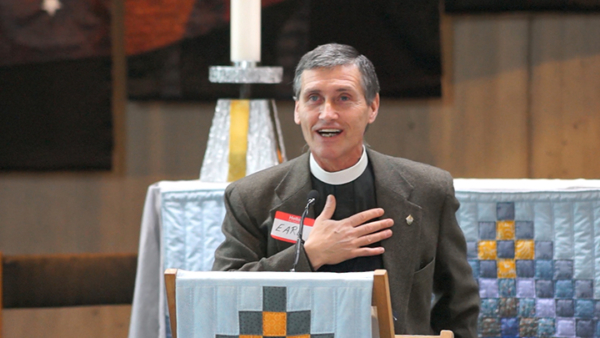 The Rev. Earl Kooperkamp is rector of Church of the Good Shepherd in Barre, Vermont. Photo: Diocese of Vermont

[Diocese of Vermont] With the pandemic came an opportunity.

The Rev. Earl Kooperkamp and the people of the Church of the Good Shepherd in Barre, Vermont, had been working to help homeless people in Washington County for more than a decade, serving them a hot breakfast two mornings a week and working with ecumenical partners to help find them stable places to live.

Their progress had been such that in the last four years, the church and its partners had begun to believe that they might soon be able to find housing for almost everyone.

“There are a lot of homeless people, but we know who they are,” Kooperkamp said. “It’s an identifiable number. So we started working on getting people into more permanent housing.”

Then in early March, the COVID-19 pandemic hit the region. The Good Samaritan Haven, the area’s principal shelter, had to close its doors and find new shelter for 38 clients almost immediately. In addition, people who had been couch surfing needed to find new accommodations, and the hearty few living on the streets had to move indoors because warming facilities had to be closed.

Good Shepherd and the congregations of the Barre Interfaith Group were in the thick of what happened next.

“We surfaced the idea: Can the state get a block of hotel rooms?” Kooperkamp said. “The state agreed. Also the hotels were emptied out. The hotel owners were like, ‘You want to rent out our rooms for a while? Please!’”

Most of the Good Samaritan guests moved to the shut-down Econolodge in Montpelier. Others went to The Hilltop in Berlin, or the Pierre and the Budget Inn in Barre. The move brought significant challenges, such as providing three meals a day for people who could no longer follow their old routines. But it also brought an opportunity.

“We said, ‘Now we’ve got a month when people will be in hotels,’” Kooperkamp said. “Can we get people to fill out apartment applications, use the $1,200 [from the CARES Act] for security deposit, and get people into apartments? If so, we’ve got the opportunity maybe not to end homelessness completely, but to clear out the Good Samaritan shelter.”

That work is under way, and the success of the endeavor won’t be clear for at least several months, but Kooperkamp and the people of Good Shepherd believe it is a hopeful turn in a journey that began 10 years ago.

In 2010, Good Shepherd and other congregations in Barre offered their church buildings as warming shelters for people without homes, because clients of Good Samaritan were required to leave the facility by 7 a.m. “One thing leads to another,” Kooperkamp said, “and pretty soon you are serving a full breakfast.” Which was just what Good Shepherd did, two mornings a week.

“Our church happens to be situated between a couple of public housing building for elderly and disabled people, and a lot of people with mental illness end up there too,” said Beth Mueller, a parishioner who has worked with homeless people for more than 40 years. “We were perfectly happy to have folks come over.

“I think people [in the parish] felt very good that we had moved beyond just going to church for worship, and that we are doing something that actually does impact people’s lives. It was kind of our little baby.”

The parish’s good work caught the eye of Bishop Shannon MacVean-Brown. “I am impressed by Good Shepherd’s responsiveness to the community’s needs,” the bishop said. “They have kept their hearts open to the needs of the community. They would never have had this opportunity otherwise. The pandemic seems to have increased their determination to address a long-standing issue, and for that I am grateful. This gives me hope for the future of the church and our communities of which we are a part.”

There is more to ending homelessness than signing leases, and the people of Good Shepherd know that. Many of those without permanent shelter in Washington County are struggling not simply with homelessness, but with substance abuse and unaddressed mental health issues, especially family trauma, Kooperkamp said. “Those are the biggest leading factors. Plus, quite frankly, the unrelenting rural poverty and rural isolation.”

Once housing is found for people currently living in the shelter, the work of accompaniment remains to be done. “It takes somebody who is willing to invest the time, and not just say, ‘OK, we’re done. Glad you got your apartment. Hope it all works out OK,’” Mueller said. “People still need counseling, rides to the grocery store, help finding furniture.”

Managing those tasks may determine whether most of the homeless people in Washington County are able to maintain a permanent place to live. In the meantime, Kooperkamp said, he is glad the parish is trying to make the world that will emerge on the far side of the pandemic fairer than the world left behind.

“As we are talking about coming through some of this and knowing there is going to be a new normal, can that new normal mean more than wearing masks and social distancing?” he asks. “Can it mean we can be in this together and, even though socially distant, find ways that some of the most vulnerable members of our community could be taken care of as well?”