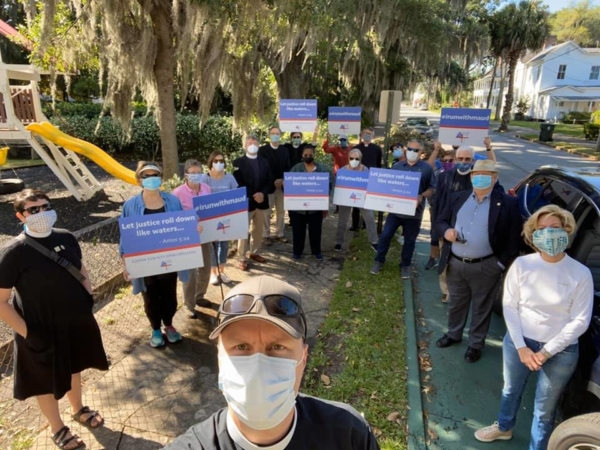 The Rev. Tom Purdy leads a group of Episcopalians on May 8 in walking to the Glynn County courthouse in Brunswick, Georgia, for a demonstration over the killing of Ahmaud Arbery.

[Episcopal News Service] Episcopalians in Georgia are adding their voices to the growing calls for justice in Glynn County after a white father and son were accused of killing an unarmed black man while he was out jogging there on Feb. 23.

Authorities didn’t make arrests in the killing of Ahmaud Arbery until May 7, after cellphone video surfaced appearing to show Arbery’s death. On the day of the arrests, 29 local religious and civic leaders, including six Episcopal priests, issued a statement lamenting “the tragic and senseless loss of a precious human life.”

“We know of no explanation for this lack of justice,” they wrote. “The failure of leadership within the Glynn County Police Department to immediately refer this case to the Georgia Bureau of Investigation is a stain on our community. Our elected officials must not accept the status quo. It is time for positive change.”

The case has drawn intense national interest in the past week amid questions about why it took so long to file murder and assault charges against Gregory McMichael, 64, a former investigator for the local prosecutor’s office, and his 34-year-old son, Travis McMichael. The pair originally told investigators that they had chased Arbery in a pickup truck and shot him after suspecting him of being tied to recent break-ins in the area.

People in Georgia and beyond have expressed outrage at the killing, saying Arbery’s only offense appeared to be a willingness to go “running while black” in the McMichael’s Satilla Shores neighborhood, on the Atlantic Coast in south Georgia near Brunswick. On May 8, runners around the world dedicated 2.23 miles – representing Feb. 23, the day he died – in honor of Arbery on what would have been his 26th birthday and posted on social media with the hashtag #irunwithmaud.

“There is no place for vigilantism and racism in our tight-knit and loving community,” the local leaders said in their May 7 statement, which was shared on Facebook by the Brunswick branch of the NAACP. “We have a proud history of rejecting hate which we must now all draw on. Because this happened to one of ours, it happened to all of us.”

Georgia Bishop Scott Benhase blogged about the killing on the diocese’s website: “Ahmaud Arbery should still be alive and with his family.”

Georgia Bishop-elect Frank Logue, who serves the diocese as canon to the ordinary, thanked Glynn County priests for speaking out and amplified their message on Facebook. “I join with so many others in praying for his family and praying for those who chased and shot him and their families as well in my prayers each morning and evening,” said Logue, who is scheduled to be consecrated as bishop on May 30. He also expects to a preach at a liturgy from Glynn County on June 7 that will be livestreamed by the diocese.

Among the religious leaders who added their names to the joint statement was the Rev. Tom Purdy, rector at Christ Church, Frederica in Brunswick. On May 8, Purdy took to the streets of Brunswick to lead a group of Episcopalians – all wearing face masks as a precaution during the COVID-19 pandemic – as they walked from St. Mark’s Episcopal Church to the nearby Glynn County courthouse a few blocks away.

At the courthouse, they joined a larger crowd for a morning demonstration “to stand for justice in our community,” Purdy said on Facebook.

“The shooting death of Ahmaud Arbery has been a terrible occurrence in our community of Glynn County. It does not represent what this community is about,” Purdy said in another post.

“Pray for Ahmaud and his family; pray for the shooters and their family; pray for law enforcement and judicial officials; pray for our community, that the way of love would guide us all in the days and weeks to come.”