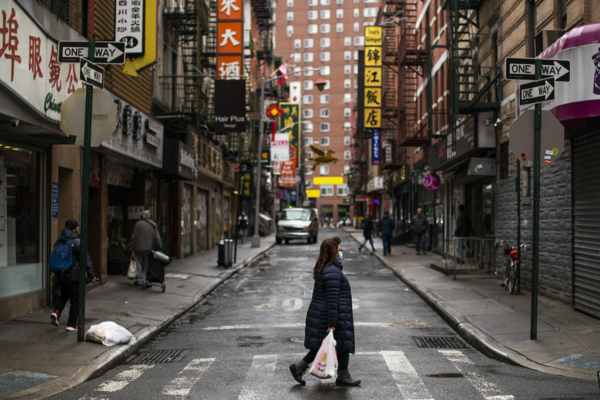 A woman wears a face mask as she walks in New York’s Chinatown on March 17, 2020, during the height of the city’s COVID-19 outbreak. Photo: Eduardo Munoz/REUTERS

[Episcopal News Service] When Sharon Matsushige Crandall coughed in a Los Angeles-area store a few months ago, another customer challenged her, asking “whether I had been out of the country recently. It didn’t even dawn on me, really, until afterward, what she meant by that,” Crandall said.

In the racially charged COVID-19 climate, Crandall and other Americans of Asian and Pacific islands’ descent say simply coughing evokes fears of being targeted and scapegoated – and has been used as a weapon of aggression against them.

“A good friend of mine who’s Chinese American was walking in his Oakland neighborhood when someone snuck up behind him and coughed on him,” the Rev. Peter Huang, Asian American missioner in the Episcopal Diocese of Los Angeles told Episcopal News Service. “The person was angry and tried to confront him. My friend chose to just run away. He was two houses away from his home in his own neighborhood.”

The Gathering was among 34 ministries funded by The Episcopal Church’s Executive Council at its October 2019 meeting. The grants were for new church starts and Mission Enterprise Zones. The Gathering’s $20,000 grant was one of 11 seed grants.
Further information is available here.

Huang is a team leader for The Gathering, a Diocese of Los Angeles ministry that provides space for Asian Pacific Americans to gather in storytelling and shared experience, with a focus on spirituality and social justice. In late April, The Gathering hosted a webinar to talk about what it means to be of Asian and Pacific islands’ descent in the age of COVID-19 and to raise awareness of the blame and hate directed at Asian Pacific Americans for their perceived spreading of the coronavirus. (Click here to view a recording of the webinar.)

In just one month, 1,500 incidents of verbal harassment, workplace and other discrimination, and hate crimes were documented against Asian and Pacific Islander Americans, Russell Jeung told webinar participants.

“We had reports from 45 states, of Asian Americans sharing their own personal experiences,” Jeung said. “Being coughed and spat upon is unique to this pandemic. People see us as being disease-carriers,” he said.

“The hatred is virulent, palpable and disturbing, very dehumanizing. It is just a matter of time before an Asian American dies because of it.”

The Rev. Fred Vergara, The Episcopal Church’s missioner for Asiamerica Ministries, said the situation is also heartbreaking because Asian Americans are on the front lines fighting the virus.

“Asian Americans compose 15% of health care professionals and health care providers … saving lives and risking being exposed to the virus while working in hospitals” yet are also exposed to racial insults and violent threats because of it, Vergara told ENS.

The coronavirus, a novel virus that causes the disease COVID-19, was first detected in Wuhan, China, in December. It has since spread worldwide, killing more than 257,000 people and infecting 3.7 million. President Donald Trump has repeatedly referred to the coronavirus as the “Chinese virus” in efforts to deflect blame for his administration’s handling of the outbreak. Trump’s inflammatory political rhetoric and the United States’ history of racism and discrimination against Asian Americans and Asian-born Americans have led to a rise in hate speech and hate crimes against Americans of Asian descent.

“Every time a national or local politician says it’s the Chinese virus – knowing full well that there are not many people who are going to distinguish the Chinese government from all Chinese people – then thousands of people across the country have to look over their shoulders when they get out of their cars,” Brant Lee, assistant dean of diversity and social justice initiatives at the University of Akron School of Law in Ohio, told ENS.

The issue is further complicated by a long history of racism against Asian Americans. With the Chinese Exclusion Act of 1882, the U.S. Congress passed the first restrictive immigration law at a time when Americans on the West Coast were concerned about white racial purity and blamed Asians and Asian Americans – who represented about 2% of the population – for a faltering economy and declining wages. That history continues to foster a perception that Asian Americans identify with Asian countries and not the United States, Lee said.

“I am a fifth-generation American. My great-great-grandparents on my mom’s side came to the United States in the 1850s. Yet, I still take pains to pronounce my words, knowing there will always be people wondering if they will be able to understand my accent,” said Lee, 58, who is a member of Cleveland’s Trinity Cathedral and the General Convention Task Force on the Theology of Social Justice Advocacy, and serves as an antiracism trainer for the Diocese of Ohio.

Racial profiling and ethnic stereotypes are insidious and create both hypervigilance and self-doubt, he said.

“I’m trying to do the right thing, so I’m going to wear a mask. An Asian guy wearing a mask in Ohio – I cannot not be self-aware of that,” Lee said. “It’s not like I think about it every second, but I think about it several times. Every trip I make to get out of my car at the supermarket, I wonder, what is that person thinking?

“You just can’t calculate it,” he added. “You don’t know if you’re being paranoid. You blame yourself. Then you read about something that did happen. You wonder if it’s just a few crazy people. Then you read that 42% of the people still support the president. It creates a lot of uncertainty.”

For the Rev. Peggy Lo, assistant rector of St. Chrysostom’s Episcopal Church in Chicago, Illinois, the coronavirus and resultant stay-at-home orders have engendered a keen sense of vulnerability.

“When I’m out, I’m really self-conscious because I know the history of reactions against Asian Americans, especially when things happen in Asian countries,” Lo, 40, told ENS.

As an example, she cited a recent social media post that referred to U.S. Rep. Ted Lieu of California, a Taiwanese-born American and U.S. military veteran, as “an agent of China.”

“I really feel defensive when I’m out in public and turn more inward, trying not to engage,” Lo said. “I have my hood on, my earphones, I just don’t want to leave myself open to the things I read about.”

In a March 10 statement, Presiding Bishop Michael Curry called on Episcopalians to remember, “We are in this together.”

Similarly, The Episcopal Church’s Washington, D.C.-based Office of Government Relations issued a statement on March 20, both calling on the federal government to aid the vulnerable of all nations and decrying political rhetoric leading to attacks on Asian Americans.

“Many of our brothers and sisters of Asian-descent, including immigrants from Asia have been harassed or attacked since COVID-19 broke out. President Trump’s description of the coronavirus as a ‘foreign virus’ during his [March 11] Oval Office address only exacerbates the perception that ‘foreigners’ are responsible for the outbreak. We denounce all displays of racism and stigmatization and encourage everyone to practice welcome and inclusion,” the statement read.

The Rev. Erin Betz Shank, 35, vicar of Trinity Episcopal Church, in New Castle, Pennsylvania, in the Diocese of Northwestern Pennsylvania told ENS that she has felt a responsibility as a church leader to call out the president’s racist remarks as well as his anti-immigration policies.

Calling COVID-19 the “‘Chinese virus’ was personally very offensive,” she said. Shank was born in Seoul, South Korea, and adopted by an American family when she was 7 months old. “I’m not Chinese … but as a person of Asian descent, I just don’t think it is necessary to make that distinction.”

“Leadership requires you to think carefully about the words you are using and the ramifications that your words as a leader have on other people, negatively or positively,” Shank said. “Unfortunately, we are seeing the ramifications of his words throughout the country.”

During the panel, Jeung said the church’s responsibility is to resist the world’s labels and to raise awareness of their resultant hurt and damage – especially to Asian American youth – who are encouraged “to shun their Asian-ness, the way others shun us.”

Dr. Joseph Lee, a psychiatrist from Redondo Beach, California, also served as a panelist during the April 24 webinar. Developing empathy, exercising compassion and building alliances are ways to address the challenges, using the core Christian tenet of “making an unjust world more just,” he said. “Theology is not just talking about personal salvation, but also about empowering the principles of a loving, justice-oriented God … in a very grounded way here and now, a kingdom-on-earth kind of way as opposed to an esoteric in heaven kind of way.”

Such efforts could begin with collective advocacy to address the higher death rate from COVID-19 among African Americans and unemployment disparities among Latinos, he said.

Jeung said education and advocacy are crucial, especially since “China-bashing and the state of U.S.-China relations will continue and be used as a campaign issue” in the upcoming presidential election.

“People of color have an understanding of racism, not on an intellectual level but through a lived experience,” he said. “If it’s something you take seriously, you have to let people of color lead. Racial dynamics are also about power differentials. It’s a big ask, but it’s the right answer.”

Jeung added that all Christians must stand up for justice. “A lot of white people hear more racist stuff about Asians than I would. That’s the occasion to stand up.”

Other ways, he said, include collectively holding local and federal governments and politicians accountable for investigating hate crimes and guaranteeing the public safety and civil rights of all citizens, and voting for those who embody “the Christian values of justice, dignity and reconciliation.”

Ultimately, Jeung said, each Christian must ask, “How is God using this time, and each of us, to respond well?’

– The Rev. Pat McCaughan is a correspondent for Episcopal News Service. She is based in Los Angeles.