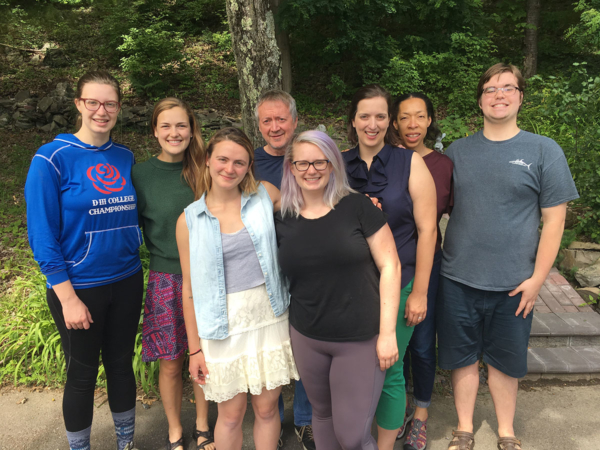 Members of the Young Adult Service Corps and Episcopal Volunteers in Mission at the 2019 mission orientation at Holy Cross Monastery. Photo: Courtesy of YASC

On March 18, she woke up to news that the K-12 school where she was teaching in the small village of Kilimatinde, Tanzania, would close for a month. While the nearest coronavirus case was more than 300 miles to the north in the city of Arusha, the country’s prime minister had decided to close schools nationwide as a precautionary measure. 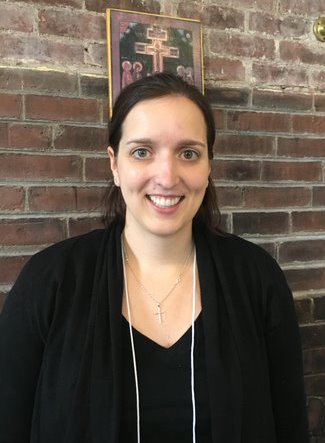 Still, many students came to the school that day to sweep floors and disinfect surfaces. Darling said goodbye and retreated back to her cottage on school property after the students finished cleaning, expecting to welcome back her second graders by mid-April.

“Then, about eight hours later, I had the phone conversation that it was the best decision for me to come home at that point,” the 29-year-old from Colorado Springs, Colorado, told Episcopal News Service. “So when the kids return, they’ll have no idea that I came back to the U.S.”

Five days after the phone call with Elizabeth Boe, The Episcopal Church’s Mission Personnel Officer who oversees YASC, Darling was self-quarantining at her parents’ home in Colorado. While a potential return is still several months away, she said she remains hopeful that she will be able return to Tanzania at some point.

The COVID-19 pandemic has disrupted the mission work of nine Young Adult Service Corps volunteers serving across the globe. Ranging in age from 21 to 30, these “YASCers” partner with The Episcopal Church and their local parishes to live abroad for one to two years and work alongside church and other partners to strengthen communities through education, increased access to health care, micro-enterprise and agricultural initiatives, and civil and human rights protection. Each YASC volunteer maintains a blog, which may be accessed through this link.

Isolating at home and abroad

While many corps members have returned to the United States, a few remain dispatched across the world, Boe said. Those who remain abroad are using technology to work remotely and stay connected to members of their adopted community.

Boe said her office has closely followed advice from the U.S. Centers for Disease Control and Prevention, the Department of Health and Human Services and the World Health Organization over the past three months. All YASC volunteers were given the option to shelter in place and the decision to stay or return to the United States were made on a case-by-case basis, Boe said.

“We monitor news, whether it’s health related, political or natural disasters around the world,” Boe said. “We pay attention to that so we can check in with our people, make sure they are OK and safe and that they’re doing what they need to do to look after themselves and the people that they’re working with.” 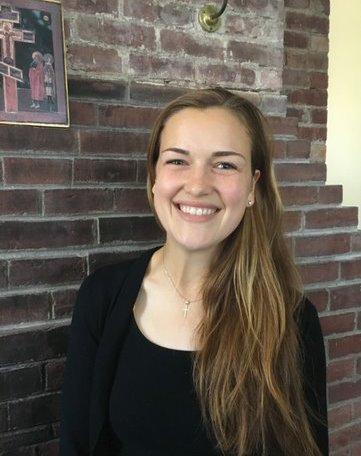 Corps member Emma Wright is sheltering in place in Muscat, Oman, where she has served since last August. The 24-year-old is a member of St. Mary’s Episcopal Church in Arlington, Virginia. After graduating from Duke University with a degree in cultural anthropology, Wright worked at a small physical therapy office and planned to pursue a doctorate in physical therapy. She put those plans on hold after discovering the YASC program, saying she wanted to experience a different culture that offered new challenges and opportunities.

Wright said the Middle East nation’s strong health care system and early response to slow the spread of COVID-19 made it an easy decision to stay.

“They closed down when we still only had 30 cases in the country,” Wright said. “So right now, everything except businesses are closed — parks, beaches, trails. You aren’t allowed to walk around outside just for fun.”

Wright works with the Al Amana Centre, an interfaith organization that aims to foster peace and reconciliation between Christians and Muslims. Video conferencing technology has allowed conversations about faith to continue, she said.

“We’ve started Facebook Live interfaith dialogues,” Wright said. “So once a week — we’re calling it ‘fireside chat’ — we go on Facebook Live for an hour-long conversation between one of our team members and one of our local friends and talk about Islam, Christianity or Oman. We also answer questions from the audience.”

Corps volunteer Nelson Pike, 23, who is living in Liverpool, England, also decided to remain abroad. A member of St. Mary’s Episcopal Church in his hometown of Rockport, Massachusetts, Pike immediately entered the YASC program after graduating with a bachelor’s degree in history from St. Olaf College, a private Lutheran college in Minnesota. He said he was looking for a gap year program that offered a missional experience, and YASC was a perfect fit. 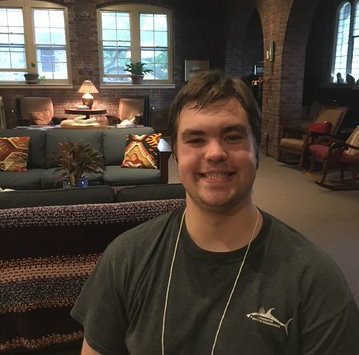 Pike said he made the decision to stay after weighing the risks associated with air travel.

“I think we could all imagine airports are a center where you’re very much at risk for catching the virus,” he said. “So it’s just safer, me staying put and staying inside my house for as long as possible. That’s a decision that can be assessed again, but for right now, I’m happy here.”

Pike has continued working with the Tsedaqah House, a missional community based at Liverpool Cathedral that carries out community-based social justice projects. In isolation, Pike has helped maintain a blog, prayerforliverpool.org, and is preparing food boxes for distribution to hungry community members.

“I feel really lucky to be here and have a way to serve Christ, even under these conditions,” Pike said.

For other YASCers, it became increasingly difficult to serve as the coronavirus spread. 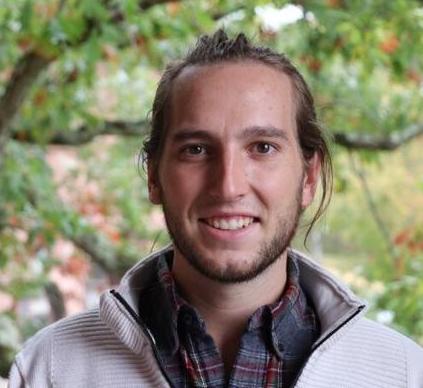 Mitchel Biebelheimer arrived in the Philippines in September 2018 to work with the Episcopal Community Action for Renewal and Empowerment, or E-CARE, Foundation. The foundation aims to increase economic sustainability and encourage self-reliance in poor communities.

Biebelheimer graduated from Oklahoma State University in Stillwater, Oklahoma, with a bachelor’s degree in economics and international business. A parishioner of St. James’ Episcopal Church in Wagoner, Oklahoma, he applied to the Young Adult Service Corps because he wanted to volunteer before entering into a full-time career.

Based in the rural community of Bontoc, about 12 hours north of the capital of Manila, Biebelheimer traveled to nearby communities and taught financial management and livelihood training courses to farmers and business owners. That work ended as fears of the coronavirus spread in early March.

“I was looking at staying in the Philippines and not doing the work I found really satisfying,” he said. “I would just be waiting out quarantine. I thought that was a really hard thing to do, especially away from my family.”

As Biebelheimer tried to book a flight home, the Philippine government was preparing to enter into total lockdown. On March 1, President Rodrigo Duterte ordered a nationwide lockdown that heavily restricted land movement across the country.

Biebelheimer said he packed his bags as quickly as possible and went to the Department of Health, where he had his temperature checked and was given clearance to travel across the country by land. The journey to the airport in Manila would be a difficult one, however, as all public transportation in the Philippines was halted.

Traveling with fellow YASC volunteer Talley Breedlove, the two were forced to improvise as they made the 12-hour drive south to the airport.

Biebelheimer said he has remained in contact with friends in the Philippines, where the government lockdown remains in place until April 30. The nation has come under fire for how it is enforcing the lockdown, which requires citizens to stay inside their homes at all times. On April 2, Duterte told police they had the authority to “shoot down” any person disobeying the orders. Three days later, a Filipino man was shot and killed by police after threatening officers with a gardening tool.

“Exactly what we thought would happen is happening — they’re in complete quarantine and they have military roaming the streets,” Biebelheimer said. “They’re not allowed to leave their house, you have to get special permission to go buy food. It’s a very unsocial situation there.”

As YASC volunteers adjust to life back at home, or become accustomed to isolation while abroad, they say their faith has remained a steadying force during uncertain times.

Pike said he has used his extra time in isolation to pray and tune in to online services.

“I’m still being open to what God has to say to us, even in these conditions,” Pike said. “I think it is crucial to helping us maintain a healthy spiritual kind of modus operandi.”

Wright said keeping a schedule not only has allowed her to remain on task and organized, but also has freed up time to spend with God.

“I draw a lot of comfort from the idea of God as steady and unchanging,” Wright said. “When things got shut down and I knew I was going to be at the center by myself for an indefinite period of time, I actually made a schedule for myself, and one of the things on my schedule is called ‘appointment with God.’ I think that’s had a huge hand in keeping me grounded. It looks different every day, but usually it’s some combination of journaling, praying and meditating.”

Now back in the United States several months earlier than she anticipated, Darling said faith has given her hope in a difficult season of life.

“It may not be my plan, and it may not be what I want, but God is with me through all of it,” she said. “I actually have a ring that says, ‘If God will bring you through it, He will see you through it.’ And I thoroughly believe that.”

– Keaton Ross is a senior journalism major at Oklahoma Christian University in Edmond, Oklahoma. Last summer, he worked as an intern at The Oklahoman newspaper in Oklahoma City. He loves iced coffee, and his favorite sports team is the Oklahoma City Thunder.