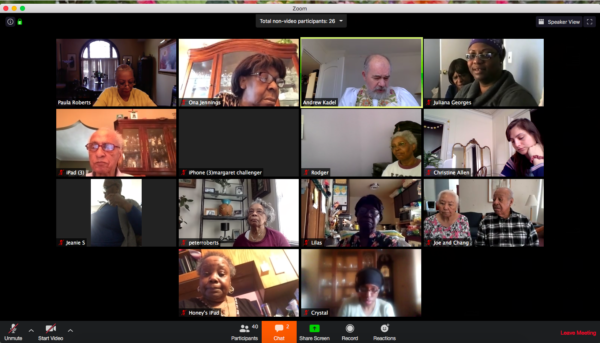 [Episcopal News Service] The vestry of Trinity Episcopal Church of Morrisania, a historic West Indian congregation in the South Bronx, called an emergency phone meeting on March 18 to discuss the Diocese of New York’s decision two days earlier to suspend public worship. Its members were unsure how the decision would impact Trinity’s mostly elderly congregation.

Warden Paula Roberts had already been thinking about how to hold the congregation together if churches had to suspend in-person services because of the COVID-19 pandemic.

“How can we keep people together?” was Roberts’ main concern, she told Episcopal News Service. The church already had a phone conference line, but then she thought of Zoom, the video conferencing application. “This was a time for me to challenge myself,” she said.

Trinity’s vestry was supportive, but there were also reservations.

“We talked about how most people may not have a computer. Most of them are elderly or not computer savvy,” Roberts said. “But we said, ‘OK, that’s fine; people can still use our conference line, or they can dial in to Zoom.’”

Still, the job of contacting parishioners about the church’s online service offerings was decidedly low-tech: letters were mailed explaining the move to Zoom, accompanied by the readings from the Fourth Sunday in Lent through Easter Sunday. The vestry and other church leaders then made follow-up phone calls.

Trinity went live with its first Zoom service March 22, with Morning Prayer instead of Holy Eucharist. More people dialed in to the telephone conference than accessed the visual or audio service on Zoom.

Lilas Bogle, who is in her mid-80s and a retired registered nurse, said she needed her granddaughter to help her set up the visual part of Zoom. But the result was worth the try, she told ENS.

“I like the camaraderie, I like father’s sermons,” she said. Yet, she continued, “I miss the physical church. I miss our singing, the choir, being with people in person and talking to them.”

Like the majority of parishioners in Episcopal churches nationwide, members of Trinity Morrisania’s Anglo-Catholic congregation are older. Most emigrated to the South Bronx in the 1950s and 1960s, from Jamaica, Antigua and other former British overseas territories scattered throughout the Caribbean, according to a history prepared for the 150th anniversary of the church’s founding, which was celebrated in 2018. Though many parishioners have since moved to other nearby Bronx neighborhoods for better schools and housing, they still return to the church they knew as newly arrived immigrants, accompanied by their children and grandchildren.

The church was founded in 1868 in what was then the town of Morrisania, and the cornerstone laid in 1874, almost a quarter-century before the Bronx became one of New York City’s five boroughs in 1898. COVID-19 came just after the church launched a $400,000 capital campaign to restore its parish hall built in 1905, a later addition to the original structure.

So far, Roberts said, members are sending in their pledges, which she believes is partly a response to the church’s efforts to offer online services. But because the church only recently decided to use an online payment system due to COVID-19, she’s encountering technical obstacles with that, too.

“PayPal is not set up yet,” Roberts said in an email. “Support keeps promising to contact us, but has not yet. I think they are overloaded.”

Even with hiccups getting parishioners on to the Zoom platform, Trinity’s online services have been going over well.

Most helpful, parishioners told ENS, is the sense of once again being together with their community during an especially hard season, as many of them know people who are sick or have died.

Ona Jennings, who worked for many years as a nurse and hospital administrator at Montefiore Medical Center, a well-known teaching hospital in the Bronx, said she found out, on the same day, that three people she knew from Montefiore had died from COVID-19.

In a time of so much death, Jennings said, she missed being able to attend church in person. “But I think we’re more attentive now, and it makes it better – it’s more precious,” she said of the online services.

The church is lucky to have a resident technology expert: Roger Emmanuel, the junior warden and subdeacon who works for a telecommunications company.

Emmanuel took advantage of the projection options in Zoom to share the order of service and even play prerecorded hymns. “The feel was great,” he said. “For me, this was a continuation of my role in the church.”

It was also gratifying to the small Bronx congregation that people who had been with them in the past returned for the online services, Roberts said. Two Episcopal Service Corps’ New York Service and Justice Collaborative fellows, who lived in Trinity’s rectory last year, worshipped virtually with them.

One of them, Sara Fread, is now a first-year master of divinity student at Pacific School of Religion in Berkeley, California. She joined Trinity’s service for Palm Sunday and was struck by the same sense of community she witnessed when she was resident there.

“I was immediately reminded of how much the community cared for one another when we started virtual coffee hour – the cacophony of voices that erupted when Paula unmuted everyone,” Fread said.

Virtual coffee breaks inserted into online services have become a time to make sure the church’s elderly members and shut-ins are being taken care of, Roberts said. During one of the scheduled breaks in the church’s three-hour service on Good Friday, there was a discussion about how to get vital medications to a disabled parishioner.

And for the church’s Easter Sunday service, Walter Thompson, the parish’s former organist, volunteered to provide live music from his home in Warwick, New York, to support the congregation’s hymn singing.

“People were thrilled with the Easter service,” Roberts said. “They loved the hymns, the prayers, and did not feel deprived by not being in the physical church space.”

“I, for one, still missed the smell of incense,” she added.

One of the concerns of the congregation’s members is that “stay at home” orders have made it hard to keep up their connection with the Morrisania neighborhood, at a time when it’s likely to be suffering disproportionately from the pandemic. Residents of the now largely Hispanic neighborhood, in which 38% of households live below the poverty line, are among those most vulnerable to the devastating health and economic effects of COVID-19.

So, on April 4, parishioners spread the palms that had been purchased for Palm Sunday on a table in front of the church, along with the day’s lessons and a poem about the pandemic in English and Spanish. They stood the approved distance away from the table and called to passersby, inviting them to take palms.

Roberts recognized a woman who always came to the church’s monthly neighborhood thrift shop. “I wanted to hug her, but I couldn’t,” she said. “So I just called to her to please take some palms.”