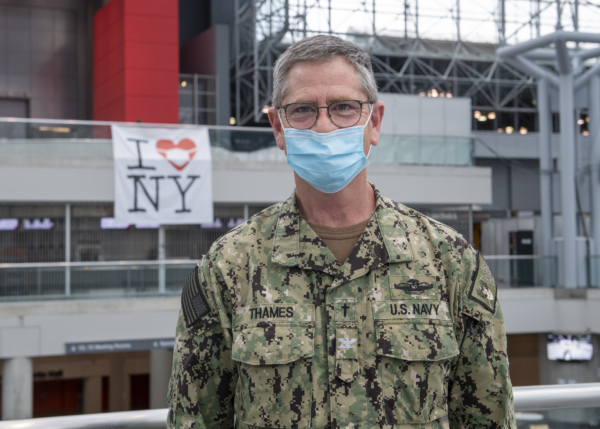 [Episcopal News Service] At 58, Captain David Thames, a senior chaplain in the U.S. Navy, has seen and done more than most people do in their entire lives. He spent six years as an armored cavalry officer in the Army before being ordained to the priesthood and serving a parish in Texas for nine years. After Sept. 11, 2001, he became a Navy chaplain, which has taken him around the world. During the destructive 2017 hurricane season, he organized relief efforts in Texas, Florida and the Caribbean.

But nothing quite prepared him for his current assignment: coordinating the movement of COVID-19 patients in and out of the military’s temporary field hospital at a New York City convention center and its hospital ship, the USNS Comfort.

“I could not have scripted this scenario,” Thames told Episcopal News Service in a phone interview from the Javits Center in Midtown Manhattan. “This is by far the most complex and most directly involved I’ve ever been” in a relief operation.

Thames, a captain in the Navy’s Second Fleet, has been working 20-hour days at the Javits Center for the past month, leading a team of Navy and Coast Guard officers in the logistical choreography of patient transfers. The Comfort and the Javits Center field hospital were brought in to take some of the pressure off the city’s hospitals as they faced a deluge of COVID-19 patients. 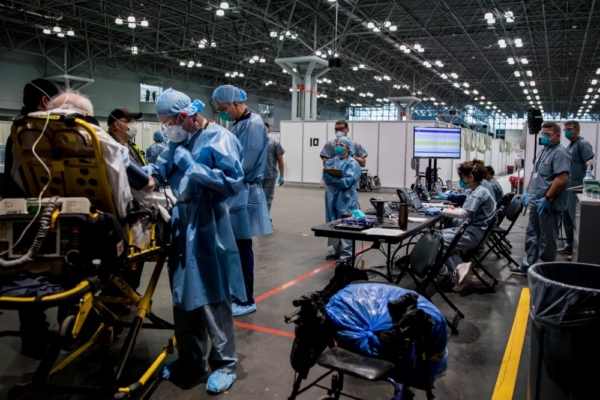 “We screen and identify patients, we facilitate the physician-to-physician conversation that has to happen before a patient is transferred, and then work through the logistics of actually having the ambulance pick up the patient in the sending hospital, get the transfer processed to bring the patient to Comfort, get the patient embarked and so forth,” Thames explained.

“We also work the other direction – we facilitate the discharge process, which is actually even more challenging in many cases because a number of the patients that we have come from other-than-ordinary circumstances, so we work very closely with New York City social service agencies in order to get the patients, when they’re ready for discharge, placed in the right environment for their ongoing recovery.”

Thames’ past experience in coordinating relief efforts wasn’t the only thing that made him the right person for the job. Dealing with lots of people in difficult situations is something chaplains are accustomed to.

The fleet commander “realized that we were going to have to have some sort of a coordinating team here at the Javits Center,” Thames told ENS. “And he said, basically, ‘Thames, this is a relationship deal. This is not about figuring out how to drop bombs and launching missiles. I need you to go up there and take lead on that.’ And it was not lost on him that it was actually the church that invented the [concept of the] hospital to begin with. So it’s really not as far out of our lane as it might look.”

The plans were developed quickly and underwent frequent changes; the Comfort and the Javits Center, originally intended to treat non-COVID-19 patients, started accepting them when that became necessary.

“The hardest part about this mission is that none of us showed up with a cut-and-paste template of how to do this,” Thames said. “This hasn’t happened since 1918, so there was no pocket reference on how to mount a relief mission in the middle of a pandemic. We’ve literally had to – the term we use in the Navy is ‘building the airplane while we’re flying it.’ … It’s taken an enormous amount of creative energy.” 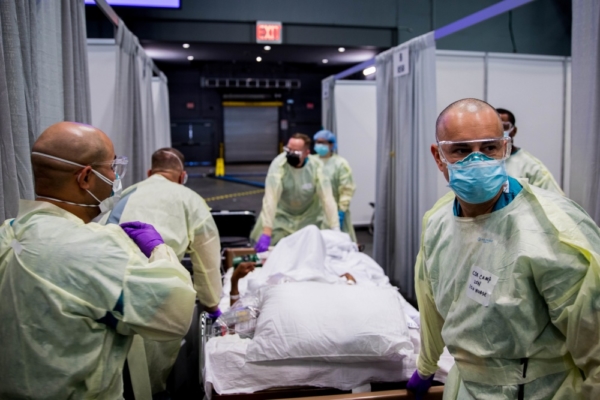 And all of that logistical work is happening as the team tries to avoid contracting and spreading a highly contagious virus. While Thames is planning complex movements of patients around the city, he’s simultaneously calculating “how close I can get to another person to look at the same flow chart at the same time.”

Another unique challenge of this mission is the anxiety much of the team feels for faraway family members who are scared or at risk.

“Our natural tendency is to keep our loved ones close at hand and try and take care of ourselves,” Thames said. “There has been an enormous underlying sense of strain that, A: ‘I’m up here taking care of these people and I feel like I should be home taking care of my people,’ and B: ‘My [family is] flat terrified and there’s not much I can do about it.’”

Thames has taken some comfort in connecting with his family in his few spare moments, watching videos his grandchildren in Texas have made for him and FaceTiming with his wife in Virginia most nights.

“Most of us that are military are used to going to some other part of the world under stressful and often destructive circumstances, doing our thing, but being aware that, by and large, our families are safe back at home,” he said. “And this one is a whole different dynamic.” 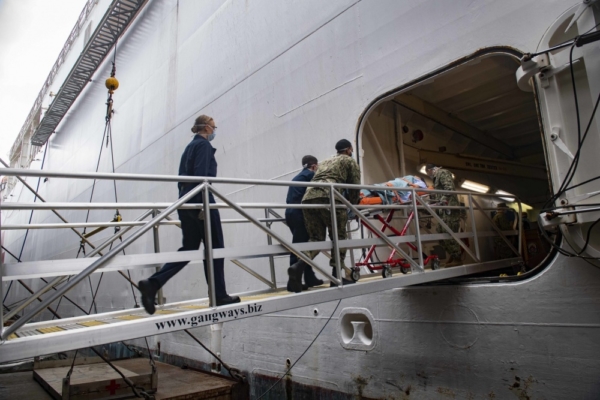 When he’s not engaged in complex planning efforts, Thames returns to his roots as a priest and chaplain, counseling members of his team who need someone to talk to.

“They want to sit down and say, ‘Hey, am I seeing this clearly? I’m experiencing these things; can I get a reality check? And there are a lot of God-sized questions that have arisen in the course of all this.”

Thames, who is not working directly with patients, has led services for the staff at the Javits Center and celebrated the Eucharist with a group of Marines who are providing security for the Comfort. In such exhausting circumstances, he’s found that the staff’s spiritual needs are similar to his own: “simple and basic.”

“This has not been a setting for a lot of theological sophistry,” Thames told ENS. Instead, it’s “things like, ‘I’m too tired to remember how to say the Lord’s Prayer. Can you remind me?’”

During his time in New York, Thames realized he “didn’t have the bandwidth” to keep up the prayer routines he’d had for so long, like reading Scripture and praying the Anglican rosary. Those daily prayers have become concentrated into one psalm that’s become his mantra for the past month: Psalm 51, which contains the famous verse, “Create in me a clean heart, O God.”

“That psalm has been my mental narrative in this thing, as I walk between the hotel that I’m staying in and the Javits Center and back, or as I have an opportunity to get away from noise and crowds for a little bit. That literally has been my spiritual discipline in this thing. … It’s made a huge difference. I felt like I could stay connected to the sacred under circumstances that didn’t really commend themselves to a lot of sacredness.”

Although the virus’ toll on New York City has been devastating, the worst projections – of hospitals so overwhelmed that care would have to be rationed – have not come to pass, and the Comfort and the Javits Center never approached their full capacity. Thames’ mission now is to make discharge arrangements for the patients that are still there so the Comfort can return to Norfolk, Virginia. Thames expects that he and his team will leave next week, and they’re not sure what comes next – although he does have some thoughts about what lies ahead for him.

The Sept. 11 terrorist attacks and the COVID-19 pandemic are, “in a way, bookending my career as a Navy chaplain with major centenary-type incidences,” Thames told ENS. “So I think this is my signal to retire – I’m not sure.”