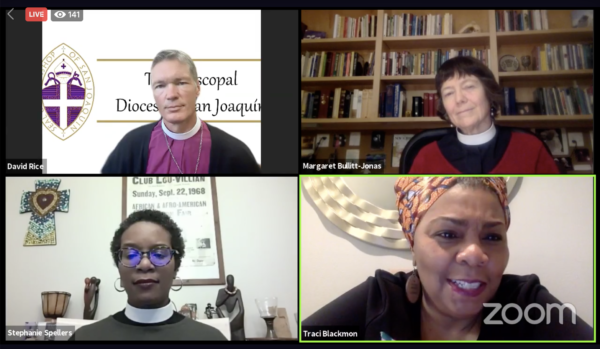 The Rev. Traci Blackmon, bottom right, speaks during a virtual panel for Earth Day hosted by Washington National Cathedral and the presiding bishop’s office on April 22, 2020.

[Episcopal News Service] Observing the 50th Earth Day under the COVID-19 lockdown was less of a celebration and more of a chance for reflection. Instead of rallies or parades, there were virtual discussions like the one hosted on Zoom and Facebook Live by the presiding bishop’s office and Washington National Cathedral as part of its “Honest to God” web series. Moderated by the Rev. Canon Stephanie Spellers, the panel discussion drew connections between the immediate crisis of COVID-19 and the overarching climate catastrophe that threatens the future of civilization.

In both cases, Christians are called to respond by acting selflessly to protect the vulnerable, the panelists said.

“We must flatten the curve regarding our consumption of resources,” said the Rt. Rev. David Rice, bishop of the Diocese of San Joaquin in California. He was joined by the Rev. Margaret Bullitt-Jonas, creation care missioner for the Diocese of Western Massachusetts, and the Rev. Traci Blackmon, associate general minister of justice and local church ministries for the United Church of Christ.

The Episcopal Church has long been engaged in climate action and other environmental stewardship efforts under the theological mandate of being good stewards of God’s creation. So, although environmental protection has become a partisan issue in the United States, the church sees it as a spiritual calling.

It is “a commitment that is so much more than political – a faith commitment,” said Spellers, canon to the presiding bishop for evangelism, reconciliation and stewardship of creation.

The connection to faith has become even more apparent to those who are able to use their time in quarantine to reconnect with nature, Bullitt-Jonas suggested, pointing out that Christian mystics have found God in nature for centuries.

“I’m seeing more people begin to reclaim a sense of the sacredness of the natural world, a sense of reverence for the web of life that God entrusted to our care,” she said.

The panelists agreed that, while the climate crisis and the COVID-19 pandemic are playing out on different timelines, they both are reminders of the interconnected nature of life and the fallacy of individualism.

“Systems of injustice are interconnected, and in this moment of COVID-19, we’re seeing that interconnectedness play out,” Blackmon said, pointing out that people who live in areas with heavily polluted air are more likely to become seriously ill from the virus.

Just as a health crisis that started in Wuhan, China, is now affecting nearly the entire world, ecological problems that may seem unrelated to our lives have deeper consequences, Spellers said.

“If you thought that what was happening to a certain species of bird had no relationship with your flourishing, that’s not true. It’s a tenet of faith but also just good science,” she said.

That combination of faith and good science is something Bullitt-Jonas hopes humanity can take away from the COVID-19 pandemic.

“There’s a great deal we can learn from this pandemic that applies to the climate crisis,” she said. “A couple of the lessons we can learn are science matters, facts matter. I’m hoping that the American public will come away from this experience with a new respect for science. Also, we’ve learned that if we’re motivated, we can change our behavior very quickly … and that can be good news regarding the climate crisis.”

And what kind of actions can Christians take right now to respond to the climate crisis? The panelists noted that many people who are accustomed to traveling frequently but are now unable to do so are reconsidering whether that amount of travel was really necessary. Driving and flying less is one of the personal changes with the highest impact on the climate, along with switching to a plant-based diet, Bullitt-Jonas said.

She also pointed to the Carbon Tracker, initially developed by the Diocese of California and expanded by The Episcopal Church, as a tool for anyone looking for concrete ways to reduce one’s carbon footprint and measure that impact. While she acknowledged that climate change seems overwhelming and it can be tempting to think that individual actions don’t matter, they can have a bigger impact than one might realize, especially since people’s behavior influences the behavior of others around them.

Another crucial action anyone can take to be a good steward of the Earth is to vote for political candidates who make that a priority, the panelists said. Resources like the nonpartisan Environmental Voter Project can help people make informed voting decisions.

Although there is much to be concerned about, the panelists said, Christians can find hope through their faith and find motivation in the intention to leave a better world for future generations.

“I may not be here when we reach where we need to be, but I can see it because I live for those generations,” Blackmon said.