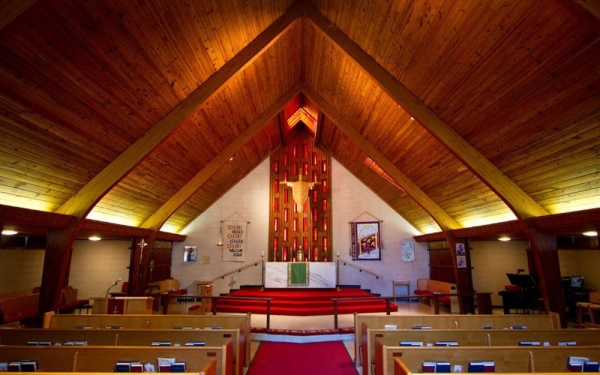 [Episcopal News Service] As some governors ease restrictions on public gatherings and other states consider similar changes to stay-at-home orders that were intended to slow the spread of COVID-19, Episcopal dioceses are proceeding with caution – by beginning deliberations on how in-person worship might resume, but without a clear view of when that will happen.

The prospect of physically gathering in church for a worship service would have been unthinkable for most Episcopal congregations just a month ago, after the escalating coronavirus pandemic set off a wave of suspensions, cancelations, postponements and closures across The Episcopal Church. Dioceses and many congregations have compensated by stepping up their online liturgical offerings, so parishioners still can practice their faith together while abiding by social-distancing guidelines.

Even now, the idea of reversing such precautions is unsettling to some Episcopalians. On April 20, when Georgia Gov. Brian Kemp held a news conference to announce his decision to begin reopening the state on April 24, including its churches, the Rev. Galen Mirate knew immediately how members of her congregation in Albany felt. They weren’t ready to return to normal.

“I don’t think he was finished speaking before I had parishioners emailing me saying, ‘No, no, no, I’m not willing to stop sheltering in place,’” Mirate, priest-in-charge at the Episcopal Church of St. John and St. Mark, told Episcopal News Service. Albany and nearby communities in southwest Georgia are dealing with a particularly severe outbreak, and with hundreds of new cases of COVID-19 confirmed each day across Georgia, worship isn’t expected to resume anytime soon inside the state’s Episcopal churches.

The Diocese of Georgia, which encompasses Albany and the southern half of the state, “will not move to in-person worship for the foreseeable future in spite of Governor Kemp’s new orders,” Bishop Scott Benhase said in an April 22 diocesan newsletter. To the north, the Diocese of Atlanta issued a parallel statement from Bishop Robert Wright, who said worship in his diocese will remain online until physical gatherings are deemed “reasonably safe” by health experts.

Kemp is allowing some businesses to reopen April 24, including fitness centers, hair salons, bowling alleys and massage therapists. That list will grow to include theaters, private clubs and in-restaurant dining starting April 27. Churches are allowed to resume services, but they and Georgia business owners still should take steps to reduce virus transmission, such as keeping 6 feet apart and following sanitation procedures.

Social distancing is still recommended in South Carolina, despite Gov. Henry McMaster’s announcement this week that he was lifting restrictions on some businesses, including retail stores, starting April 21. Florida, Ohio, Oklahoma, Tennessee and Texas are among the other states that have taken their own steps to partially reopen.

Kemp, McMaster and other governors have faced pressure from some businesses and constituents to balance public health risks with the severe disruption that the virus and stay-at-home orders have caused to local and national economies. Protesters in some cities have demanded an end to the restrictions that have contributed to the more than 26 million unemployment claims filed nationwide so far during the pandemic.

At the same time, the public health crisis is far from over. The early national surge in coronavirus cases has leveled off somewhat, though more than 20,000 new cases are still being diagnosed each day, with daily deaths this week averaging about 2,000, according to a New York Times database that is tracking the virus.

And individual states’ progress in containing the virus is open to interpretation. Kemp said “favorable data” indicated it was possible to “get Georgians back to work safely without undermining the progress we all have made in this battle against COVID-19.” This week, however, his state was still averaging hundreds of new cases a day, appearing to fall short of the “downward trajectory” that is one of the Trump administration’s criteria for states to begin reopening. President Donald Trump, a fellow Republican, said April 22 he strongly disagreed with Kemp’s decision to reopen so soon.

Episcopal leaders, while taking into account governors’ guidance, have begun identifying their own criteria for when their congregations can start worshipping again in person and what that might look like.

“The answer will be different in different parts of our diocese,” Mirate said. “I’m just imagining that southwest Georgia will open up a bit later than anybody else, and when we do open up, it’s going to be some real slow, real careful going.”

The Rev. Reed Freeman, interim rector at St. Paul’s Episcopal Church in Albany, said in an interview with ENS that he understands Kemp’s interest in getting the state on a path to economic recovery, but Freeman’s congregation isn’t in any rush to resume worshipping in the church.

“If our bishop chooses to take a more conservative approach than the governor, I’m 100% with the bishop,” Freeman said.

Benhase expanded on his approach in a document released by the diocese April 23. “Following widely accepted guidance,” it identified two conditions that must be met: a drop in new cases of COVID-19 in the state for 14 days and robust testing capabilities. Those conditions will be applied regionally. “When these conditions are met, the bishop may give permission to return to in-person worship following appropriate guidelines as outlined in this document.

“Even when in-person worship resumes, we will not ‘get back to normal’ for some time,” Benhase, who is set to retire soon, said. Georgia Bishop-elect Frank Logue is scheduled to be consecrated as the diocese’s 11th bishop on May 30.

Other dioceses are grappling with similar questions in considering how liturgical practices will evolve during the pandemic, especially if the virus remains a threat into next year, with no vaccination expected before then.

Upper South Carolina Bishop Andrew Waldo said in an April 16 message to his diocese that he had asked the diocese’s Task Force on Liturgy to develop a plan for eventually allowing congregations to resume worship in their churches, but that is still on hold at least through May 15.

“Our mission will need to be shaped by this progression that we and those whom we serve will be kept safe,” Waldo said.

The Rev. Alan Bentrup, who serves as Upper South Carolina’s canon for evangelism and mission, told ENS that diocesan leaders are following the governor’s statements, as well as guidance from the World Health Organization and the U.S. Centers for Disease Control and Prevention. The question, Bentrup said, isn’t just when to reopen churches. “The moment that we start to be able to gather again, whenever that is, what does that look like?”

The answer likely will be different for each church, he added. A congregation with fewer than 20 worshippers on a typical Sunday may not find it difficult to gather and maintain social distancing, he said, but large churches with attendance in the hundreds, “those might not be able to gather for a very long time.”

Central Gulf Coast Bishop Russell Kendrick, whose diocese includes the southern half of Alabama and Florida’s Panhandle, told ENS he plans to follow the lead of the bishops in Georgia, given their proximity. In the Diocese of Central Florida, Bishop Greg Brewer doesn’t expect churches to reopen for worship sooner than the end of May.

“Even then, this is an estimate depending on how things are going,” Brewer told ENS by email. “A part of the difficulty is that there is no uniform infection rate. We have vastly different communities – some with far higher levels of positive tests than others.”

In West Texas, Bishop David Reed is holding off resuming any physical gatherings at least through May 15. East Carolina Bishop Robert Skirving told his diocese that he was waiting for North Carolina Gov. Roy Cooper to provide more guidance on how he will reopen the state before the diocese lays plans for resuming in-person worship. “I expect that it will still be a number of weeks before we will be free to gather in groups of more than 10 people,” Skirving said.

And in Maryland, Bishop Eugene Sutton has been consulting with neighboring bishops on guidelines for worshipping in person again, when it becomes possible. Even then, virtual worship will remain an essential option, said Carrie Graves, the diocese’s communications director.

“Even when some gathering is allowed, we will have many communicants who are immunocompromised, have other underlying health conditions or are simply not comfortable being in groups,” Graves said by email. “Our virtual ministries will continue to grow and evolve to reach them and others who are not able or do not wish to attend worship in a church building.”

Likewise, the health concerns of parishioners weigh on the minds of the Episcopal clergy in Albany, Georgia. The outbreak there is thought to have been fueled by a gathering of about 200 people for a funeral on Feb. 29. Since then, Albany and Dougherty County have recorded about 1,500 coronavirus cases – more than all but two counties in the Atlanta metropolitan area. 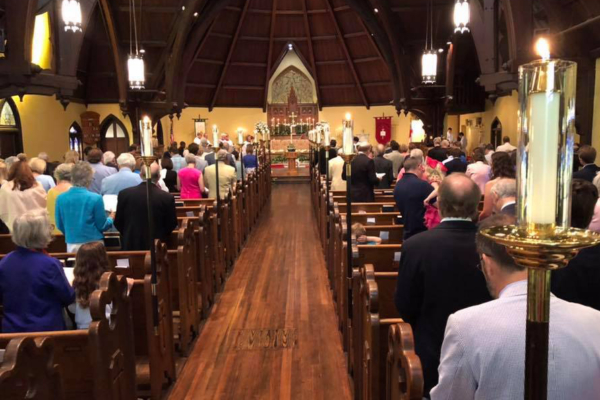 St. Paul’s Episcopal Church in Albany, Georgia, is full for a service before the COVID-19 pandemic. The congregation hasn’t worshipped in person since March 8. Photo: St. Paul’s, via Facebook

March 8 was the last in-person worship at St. Paul’s, where attendance usually tops 100, and Freeman, the interim rector, said his parishioners “miss it terribly.”

“They miss the fellowship, and they miss what I call the usual characteristics of our congregational life together,” he said. “But by the same token, I would characterize the congregation as conservative with respect to going back. … We are not chomping at the bit to rush back to in-person worship at the potential risk of health or life to our membership.”

Mirate echoed Freeman in describing her congregation at the Church of St. John and St. Mark, which formed in the 1990s when a mostly white congregation welcomed parishioners of a historically black church that was destroyed in a flood.

“They’re just warm and affectionate with one another, so this has been really hard on them … not seeing one another in person,” she said. “They could spend 20 minutes passing the peace if I let them.”

But with older parishioners making up most of the 45 people who usually gather for worship on Sunday, they, too, aren’t in a rush to return.

“Even when we’re able to worship in person again, it’s going to be a nerve-wracking situation,” Mirate said. Some parishioners may be overjoyed – and find it hard to maintain social distancing. Others may not feel comfortable returning to the church with the virus still circulating, she said.

“Some of them, it’s going to take them a long time to come back to the normal, ebullient fashion of worship and interaction with one another that they knew and loved for a quarter of a century,” she said.