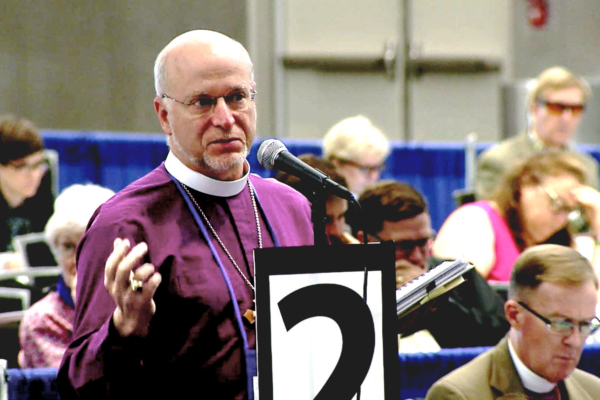 Bishop William Love of the Diocese of Albany tells General Convention during the House of Bishops debate on liturgical marriage-equality Resolution B012 that passing the measure would force him to violate his ordination vows. Photo: Episcopal Church video

[Episcopal News Service] The Title IV hearing panel dealing with Albany Bishop William Love’s refusal to allow same-sex marriages in his diocese has been rescheduled due to the COVID-19 pandemic. It was originally set to take place on April 21 in Colonie, New York.

In 2018, after the passage of General Convention Resolution B012 — which allows same-sex marriages to be performed across the church, wherever it is legal to do so — Love issued a letter stating he would not abide by the resolution and would continue to block same-sex marriages in his diocese. During a House of Bishops meeting in September 2019, it was announced that Love would face a hearing under the church’s Title IV disciplinary process.

In a letter to his diocese on April 16, Love said he had been informed by Bishop Nicholas Knisely of Rhode Island, chair of the hearing panel, that the hearing would not take place as scheduled and that it may be held virtually. Love said the panel is “currently working through the logistical as well as legal requirements for such a meeting to occur.”

“It is my hope and prayer that a new date will be set soon,” Love wrote.