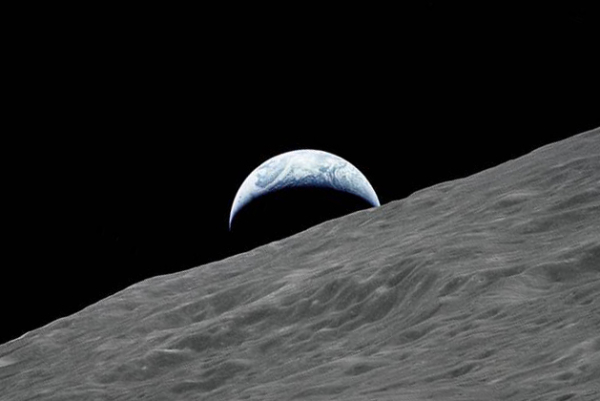 The crescent Earth rises above the lunar horizon in this photo taken from the Apollo 17 spacecraft in lunar orbit during the final lunar landing mission in the Apollo program. Photo: NASA

[Episcopal News Service] For many Episcopalians, the COVID-19 pandemic is a reminder of the interconnected nature of humanity: our health depends on the health of those around us, and small-scale individual actions can ultimately have global consequences. While the pandemic is demanding the world’s immediate attention, another crisis is looming that requires a similar level of urgent global action: climate change.

That issue will take center stage as Episcopalians celebrate the 50th anniversary of Earth Day on April 22. In 1970, the first Earth Day launched the modern environmental movement, with an estimated 20 million Americans demonstrating for environmental protection; today, it is said to be the largest secular observance in the world. Fifty years ago, primary concerns in the United States included pesticides, oil spills, toxic waste dumps and other agricultural and industrial pollution. While many of these problems have been ameliorated since then by the Environmental Protection Agency (created that same year), the Clean Air Act and the Clean Water Act, the greenhouse effect caused by carbon emissions has emerged as the most dire threat to the environment and to the future of the human race.

“It’s strange and fitting that we’re marking the 50th Earth Day during a global pandemic,” said the Rev. Canon Stephanie Spellers, canon to the presiding bishop for evangelism, reconciliation and stewardship of creation.

“COVID-19 has forced us to acknowledge the web of life that connects us and all of creation. We are – for better and for worse – in this together. I pray we will really look around on Earth Day, notice the presence of God in the trees that keep on blooming, the birds whose song you can now hear, the waters you long to visit as soon as we can move freely. Notice, be grateful and swear to protect and honor all that God has made. In the process, we are also saving our own lives,” Spellers told Episcopal News Service.

While it may seem counterintuitive to focus on climate change amid the COVID-19 emergency, the two issues are inextricably linked. Climate change compounds the problems that lead to disease outbreaks and that limit effective responses. And a Harvard University study has found that even a small increase in long-term exposure to air pollution (which disproportionately affects African Americans) significantly increased patients’ risk of dying from COVID-19. At the same time, within the past few weeks, the Trump administration has been rolling back regulations on air pollution and ignoring its own public health experts’ recommendations on protecting citizens from industrial emissions.

The Episcopal Church has long been engaged in climate action and other environmental stewardship efforts (like protecting the Arctic National Wildlife Refuge and fighting against the Dakota Access Pipeline) under the theological mandate of being good stewards of God’s creation. So, although it won’t be possible to celebrate the 50th anniversary of Earth Day by holding rallies, the church invites Episcopalians to participate in other ways.

Washington National Cathedral will hold two virtual worship services on Sunday, April 19. A Holy Eucharist service at 11:15 a.m. EDT will feature a sermon from the Rev. Margaret Bullitt-Jonas, creation care missioner for the Diocese of Western Massachusetts. Then, at 2 p.m. EDT, the National Cathedral will hold a multifaith Earth Day service focused on climate action with prayer, song and a message from Presiding Bishop Michael Curry. Episcopalians can also participate in the interfaith Nationwide Climate Prayer. Other Earth Day services and events across the church can be found at TryTank’s Digital Church Guide.

The National Cathedral and the presiding bishop’s office will also co-host a discussion on creation care and environmental justice via Zoom and Facebook Live at 8 p.m. EDT on Earth Day, April 22, with church leaders including Spellers, Bullitt-Jonas and Bishop David Rice of the Diocese of San Joaquin. More Earth Day resources for congregations are available from the Episcopal Church Foundation. The presiding bishop’s office also invites Episcopalians to share their prayers for the natural world and their Earth Day experiences – how they’re taking action to protect the environment, where they see life and hope in creation – on social media.

Another way Episcopalians can observe Earth Day while confined at home is to use the Carbon Tracker developed by the Diocese of California. The concept has been generating churchwide buzz since the diocese launched an early prototype of the tracker in July 2018 during the 79th General Convention in Austin, Texas. Since then, web developers have continued to refine the tool while inviting more Episcopalians to test it out. The tool can track participants’ carbon emissions from all of the church’s 110 dioceses and regional areas. The Diocese of California has organized webinars to help people navigate the tool, and as of this month, it reported 1,350 participating households.

Stephanie Taylor, the diocese’s communication director, said a key challenge going forward will be to broaden the pool of participants beyond those who already had been taking personal steps to curb climate change.

So far, “it’s a lot of enthusiasm from people who are generally more plugged in to the environment, to care of creation, stewardship of creation,” Taylor told Episcopal News Service in an interview last month. Likewise, the West Coast is overrepresented in the early results. The Diocese of California has the most participating households, with 402, followed by Los Angeles with 180 and Olympia in Washington with 154.

“The next step is going to be getting it out to the mainstream,” Taylor said. Diocesan officials are making the case to Episcopalians across the church that even simple actions to improve the environment and preserve God’s creation can be meaningful.

“Small, tiny actions do matter,” Taylor said, and adding those actions to the tracker can place individual work in the context of the collective impact. “When you take those actions collectively with other Episcopalians … the numbers start to add up.”