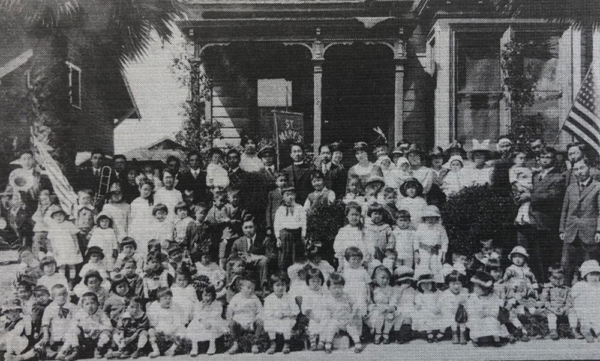 A 1918 church school class smiles with the Rev. John Misao Yamazaki, vicar, and teachers outside the Mariposa Avenue home used for Sunday services by St. Mary’s Episcopal Church in Los Angeles, California. Photo courtesy of the Diocese of Los Angeles

[Religion News Service — Los Angeles, California] At the height of the influenza pandemic in 1918, the Rev. John Misao Yamazaki stopped holding services at St. Mary’s Japanese Mission, the Episcopal church in Los Angeles he helped found more than a decade prior. Before mandatory quarantines were enacted, Yamazaki began visiting homes to pray for sick children and families.

More than a century later, in the midst of another global pandemic, the Rev. Laurel Coote, Yamazaki’s successor at what is now St. Mary’s Episcopal Church, stands in the quiet sanctuary livestreaming images of its empty pews and stained glass windows to her congregation via Facebook.

“I felt compelled to come into the sanctuary so that I could sit in its beauty and its silence and stillness. And I know that you’re missing it too, and so I thought, let me share it with you today,” Coote says in the video. “Christ is alive in this holy place.” 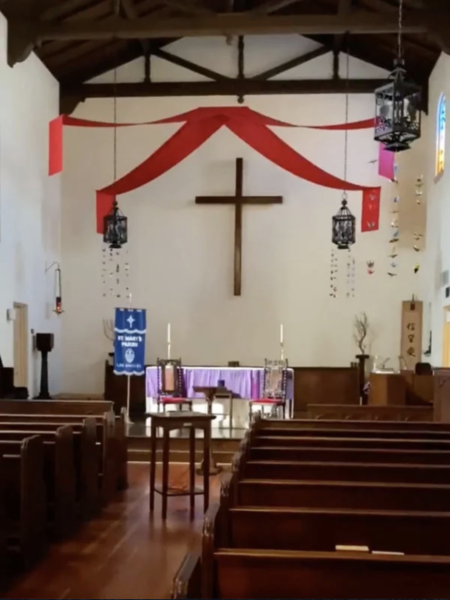 Historical records unearthed by the Episcopal Diocese of Los Angeles show scenes of quarantine in the winter of 1918 and 1919 similar to the ones unfolding today: church doors shuttered, congregants in masks, clerics visiting sick patients. The experiences of older, traditional churches like St. Mary’s, logged in yellowed histories and faded black-and-white photographs, show how American religious institutions once weathered a crisis strikingly similar to this one.

“The example that was set by congregations and individuals during the 1918 pandemic has been a source of encouragement in the present time,” said Canon Robert Williams, the historian for The Episcopal Church’s Diocese of Los Angeles. “A number of our great-grandparents withstood the influenza outbreak, and their example shows us that we can withstand the challenges of the present day.”

Los Angeles escaped the first wave of influenza in early 1918, but a second, more deadly wave of the disease swept across the country that fall. In September 1918, a pair of local military bases went into quarantine, and on Oct. 11, government officials ordered the shutdown of schools and public gatherings. Then, as now, shutdown measures appeared to work: By the end of the epidemic, Los Angeles had 494 deaths per 100,000 people, compared with 673 per 100,000 in San Francisco.

Church records cite the home visits made by Yamazaki — a Japanese immigrant himself — as an important part of the church’s foundation. Many of the Japanese American families he visited had never met a Christian priest before the pandemic, but his willingness to pray with them convinced some to join the congregation. Two decades later, the mission would go on to help local families weather Japanese internment during World War II.

After World War II, when many of those interned returned to LA, St. Mary’s became a refuge for Japanese Americans who had sold their homes before internment. The church opened up a hostel for the otherwise homeless. 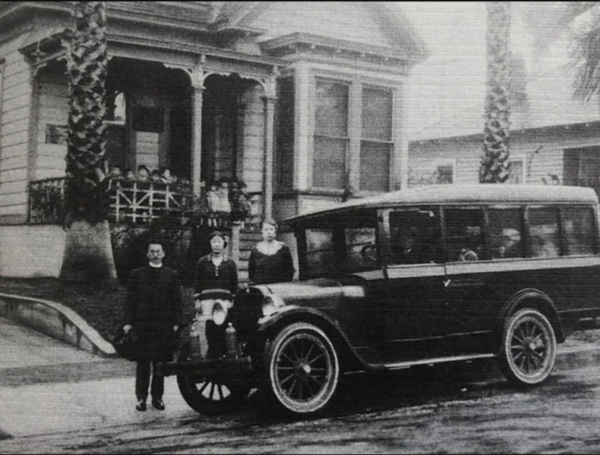 Today, much of St. Mary’s English-speaking congregation is still Japanese American. But when local immigrant Mexicans, mostly from Oaxaca, began using St. Mary’s facilities as a community center eight years ago, Coote’s predecessor added a Spanish Sunday service. Today it is as large as the English service.

And amid the coronavirus pandemic, St. Mary’s Church has again expanded its community outreach. To assist the community’s large homeless population, Coote has extended the hours of a “safe parking” program in the church lot for people living in their vehicles from overnight to 24 hours. The church staff has also raised a special discretionary fund to help its most affected congregants pay bills.

“Both then and now, it’s a case of neighbors helping neighbors and congregations abiding by the requirements for closures and social distancing,” Williams said.

But as churches move on from Holy Week and Easter, Yamazaki’s home visits have been replaced by Coote’s internet-borne videos. 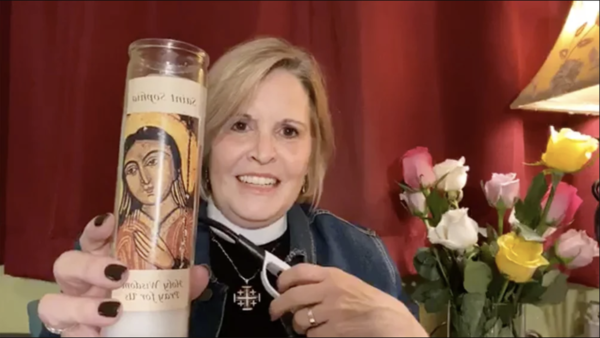 Before coronavirus, only 22 percent of Protestant churches said they livestreamed entire services, according to polling from LifeWay Research. Now, 4 out of 5 churches are adjusting the way they do ministry and 45 percent planned to livestream Easter services, a recent Barna poll shows. As faith communities around the country close their physical doors, many are turning to social media and streams to connect with their congregations.

Heidi Campbell, vice president of the International Society for Media, Religion and Culture, has watched 20 different church livestreams a week since the closures began. She sees a consistent theme in churches’ strategies going digital.

The online shift, Coote believes, could change the way faith is practiced moving forward. “I don’t believe that we’ll ever return to the way that it was,” said Coote. “St. Mary’s had never been a digital church, and this has opened up a new way of expressing.”

Following Los Angeles diocesan protocols for COVID-19, St. Mary’s isn’t allowed to even livestream from its sanctuary right now. Instead, Coote is streaming her services from home. She produced her brief Facebook broadcast from the sanctuary during a quick stop at her church office to pick up paperwork.

“The hardest thing we’ve had to do is say to priests that you can’t even livestream from your church,” said Bishop John H. Taylor. “We follow a savior who gave up everything he had for the sake of the world. And what we’re being invited to give up this year is the physical sacrament, which we love. We are giving all that up to help save lives.”

On Palm Sunday, Coote held services on Facebook Live and Zoom in both English and Spanish. On Maundy Thursday, the congregation held a pandemic-inspired hand-washing ceremony over Zoom, instead of the more customary foot-washing ceremony. For Good Friday, she screen-shared a slideshow of woodcut images of the Stations of the Cross from Virginia Theological Seminary, accompanied by bilingual readings from Episcopal Migration Ministries. For Easter, the congregation met virtually for Morning Prayer, a traditional service without Eucharist from the denomination’s Book of Common Prayer.

The move to the internet has allowed Coote to begin holding Wednesday night prayer services over Zoom and Facebook Live, which she says has given St. Mary’s the opportunity to move from a “Sunday church” to an “all week” church.

Taylor said he sees similar shifts across the diocese. “People are saying, ‘We have more time for the pleasure of simple conversation and fellowship,’” Taylor said. “Suddenly there’s all of these relationships flowering, and I think that is going to  transform us into a church that’s better equipped to sustain one another through the ups and downs of life.

“People are rediscovering the Daily Office of prayer and realizing that they can be in touch with their people every day,” said Taylor.

“Part of what the community is involved in is asking who they are. There’s no better time for fostering this exploration,” Coote said. “For many people the sanctuary, the building, the environment is all what makes church, church. This experience of COVID-19 is causing us to realize that we are the church beyond the walls.”

This story is part of a collaboration between Religion News Service and The GroundTruth Project exploring how faith communities around the world are adapting to COVID-19, produced with support from the Henry Luce Foundation.