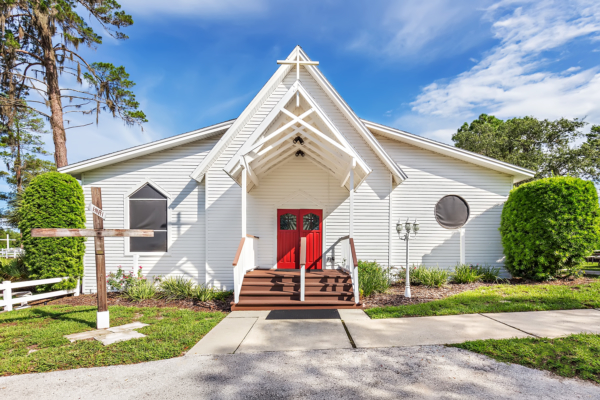 All Saints Episcopal Church in Tarpon Springs, Florida, is among the congregations across the United States applying for loans through the Paycheck Protection Program included in the federal stimulus package known as the CARES Act. Photo: All Saints

[Episcopal News Service] It may not have merited a single mention in the online video of your socially distanced Easter Sunday service this year, but behind the scenes – before, during and after Holy Week – the federal CARES Act has been and continues to be a big deal for churches.

Much of the $2 trillion stimulus package that became law on March 27 is intended as a lifeline for private sector employers and workers, but The Episcopal Church and other tax-exempt faith-based organizations also qualify for emergency federal assistance amid the sudden economic downturn caused by the rapid spread of COVID-19. Finances at congregations of all sizes also have been disrupted by widespread prohibitions on public gatherings.

“Let’s face it, this is going to affect everybody to some extent. It just depends on what kind of condition you’re in,” said the Rev. Bob Kinney, who serves as a deacon and business manager at All Saints Episcopal Church in Tarpon Springs on Florida’s Gulf Coast.

Kinney sits on the lowest rung of a ladder of churchwide mobilization. The CARES Act, formally known as the Coronavirus Aid, Relief and Economic Security Act, allotted $350 billion for loans to employers through its Paycheck Protection Program. In addition to payroll costs, the money can be used to cover utility bills and mortgage or lease payments for up to two months. All Saints applied for a $27,600 loan.

Up one rung on the churchwide ladder, the Diocese of Southwest Florida has been in regular communication with its 77 churches and two church plants about their financial options. As the coronavirus crisis has developed, the diocesan financial team, led by Ann Vickers, canon for finance and administration, has organized weekly webinars with priests and parish administrators. Vickers’ advice has included how to apply for federal assistance. All Saints and 69 other churches in the diocese are doing so.

The CARES Act allows them to request loans worth up to 2½ months’ personnel costs. Across the diocese, those requests total more than $6 million covering about 735 jobs – including the 38 people who work for the diocese and for the diocese’s DaySpring Episcopal Conference Center in Parrish, Florida.

The abrupt shift last month to online worship services has deprived churches of the ability to collect traditional plate offerings, though pledges have continued to come in through websites and by mail. Within those constraints, some Southwest Florida churches’ financial outlooks are better than others, Vickers told Episcopal News Service.

Their cash reserves vary, as do their parishioners’ financial statuses, she said. Many congregations hadn’t attempted to collect digital offerings and donations until now, when it became imperative. With much of the economy shut down and more than 16 million people nationwide filing unemployment claims in the past month, churches and their parishioners may face financial disruptions for quite some time.

“No one yet has seen the end or even the middle of what we’re going to witness regarding financial [impact],” Vickers said.

One more step up the ladder, Episcopal agencies and churchwide staff are working to extend some financial relief to dioceses and parishes while also ensuring that church leaders have the latest guidance on CARES Act implementation.

Presiding Bishop Michael Curry on March 17 assured dioceses “we will work with you” if assessment payments need to be rescheduled. Church Pension Group is waiving some parishes’ pension obligations for two months. The Episcopal Church’s Washington, D.C.-based Office of Government Relations advocated at the congressional level for passage of the CARES Act, and the Episcopal Church Foundation followed up with an informational CARES Act webinar featuring a panel of experts. The discussion has since been posted on its website.

One stumbling block along the way involved confusion over whether churches were covered by the CARES Act’s Paycheck Protection Program since they are not required to obtain the same tax-exempt certifications as other nonprofits. Episcopal leaders on all rungs of the ladder shared updates and suggestions with each other as they pressed for and awaited clarification. Late on April 3, the Small Business Administration, or SBA, which oversees the program, issued guidelines that confirmed churches were covered.

Vickers shared with ENS part of an email chain in which diocesan and churchwide administrators and attorneys tracked those developments. In some cases, she said, church officials in Southwest Florida were the ones informing their lenders of the SBA’s clarification.

“That is an especially astounding example of the coordination of The Episcopal Church from all levels,” Vickers said.

Officials with the Domestic and Foreign Missionary Society, or DFMS, The Episcopal Church’s legal and corporate entity, have been active both in those conversations and in finalizing DFMS’ own application for assistance under the Paycheck Protection Program.

The program’s loans are available to employers with staffs of 500 or fewer, to help those employers keep money flowing in the short term. After two months, the loans can be converted to grants if churches and other participating employers meet certain criteria, such as maintaining staffing levels.

With a churchwide staff of 152, the DFMS applied for a $3 million loan.

“It is very likely that income to the DFMS will be sharply curtailed for the remainder of 2020,” Kurt Barnes, the church’s treasurer and chief financial officer, said in a March 27 memo to department heads. “The cancellation of physical worship services during Lent, Easter and thereafter will affect parish and diocesan income, which, in turn, will affect the ability of dioceses to fulfill pledges to the churchwide budget.”

Dioceses are required by church Canons to contribute 15% of their incomes as assessments to The Episcopal Church to support a range of churchwide ministries, from evangelism and church planting to caring for creation and racial reconciliation. Paid in full, those assessments would total nearly $90 million of the church’s revised $137 million budget for 2019-2021.

“While we cannot control that income, we can control expenses,” Barnes said in his memo, which advocated a 20% reduction in overall DFMS spending this year. Staff costs make up 44% of churchwide spending, so to maintain current staffing levels, departments were asked to cut about 35% in non-staff budget items, such as travel expenses.

Barnes told ENS in a phone interview that receiving a CARES Act loan could help stabilize the income side of the equation. As of April 14, the DFMS’ loan still was being reviewed for final approval by the SBA.

With a deep recession all but certain due to the coronavirus – possibly the worst since the Great Depression – this moment defies recent historical comparisons, Barnes said. It also is too soon to say what long-term effect the economy and disruptions to normal parish life will have on the church’s finances, but Barnes expects to have a better picture by August, when his staff and the church’s Executive Council will begin developing the church’s 2021 budget.

Balancing a church budget is both an art and a science for Kinney. While his job is to tally the income and expenses at All Saints in Tarpon Springs, as a church member for about 20 years, he also knows how the congregation “has behaved over time.”

Kinney knows that contributions from seasonal visitors make a difference in the Sunday offering this time of year. With in-person worship suspended, “our open plate offering is almost nonexistent,” he said in an interview with ENS.

He knows that many of the parish’s year-round worshippers are retirees and they aren’t as directly affected by the economy as working-age parishioners. Typical Sunday attendance was about 120 before the crisis. Pledge income has remained steady, he said, and he is optimistic about the church’s short-term finances.

“I worry about it,” Kinney said, “but frankly, with our congregation, we’ve seen some drop-off but not nearly as dramatic as I thought it might be.” He has remained only mildly concerned even after Gov. Ron DeSantis on April 1 issued a “stay at home” order for the state, one of the last states to enact such a policy.

Kinney’s cautious optimism is shared by the Rev. Eric Cooter, rector of St. Monica’s Episcopal Church in Naples, Florida, about three hours south of All Saints along the coast. The church’s treasurer and comptroller carefully manage cashflow under normal conditions, and that has helped St. Monica’s respond to coronavirus disruptions, Cooter told ENS. 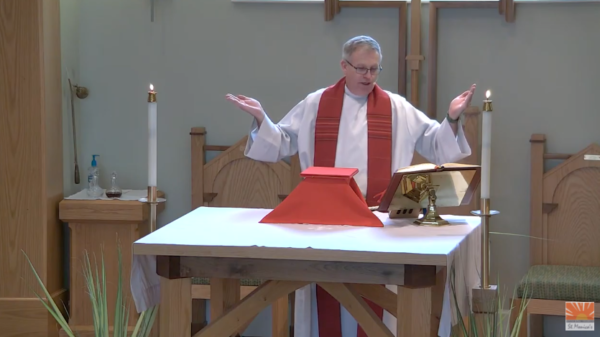 The church normally draws up to 250 worshippers across four weekend services, Cooter said. With worship now exclusively online, viewership numbers have been promising – about 400 for the Palm Sunday service, he said – but the normal pledge income of more than $5,000 a week dwindled to less than half that in the first weeks after in-person worship was suspended.

Since then, pledge income appears to have returned to normal levels, Cooter said. Even so, St. Monica’s applied for a CARES Act loan to help maintain the congregation’s staff of 13 part-time and full-time employees.

With guidance and support from their dioceses, congregations across The Episcopal Church are applying for the loans as insurance against financial uncertainty. That uncertainty is expected to persist even as some parts of the country are discussing plans for gradually easing social distancing precautions once the number of new coronavirus cases subsides.

The Diocese of Indianapolis announced April 1 that it was making the next two months of apportionment payments to the diocese voluntary for congregations below certain asset and income thresholds. The diocese also detailed other types of relief available to congregations, including the Paycheck Protection Program.

The loan program also has figured prominently in other dioceses’ recent communications, from Southern Virginia to Chicago to Los Angeles.

California was one of the first states hit by coronavirus outbreaks, prompting shelter-in-place orders early on. Los Angeles Bishop John Harvey Taylor issued a letter March 31 on the financial challenges now facing the diocese’s churches and invited clergy to participate April 2 in an online workshop about the CARES Act. Video of the workshop was posted to YouTube.

“The public health crisis has created an economic crisis, and we are all acutely aware of our financial vulnerabilities and responsibilities,” Taylor said in his letter. “How do we address the financial needs of the church at this time? We are all called to remember that everything we have, everything we do, everything we are is a gift from God – and it is a gift that is meant to be shared.”

In Wisconsin, the Rev. Kevin Huddleston sent a message on April 3 to the Diocese of Milwaukee outlining the Paycheck Protection Program and other types of relief available. The diocese encompasses the southernmost third of Wisconsin and ranges from larger urban and suburban congregations in and around Milwaukee and Madison to small congregations in far-flung rural counties.

“Each parish is in a different place and a different space in this particular time in their lives. Some parishes have resources; some don’t,” Huddleston said in an interview with ENS. He has served for the past month as the diocese’s interim canon for finance.

Huddleston also spoke from his experience currently leading two of those congregations: St. John the Divine Episcopal Church in Burlington and Church of the Holy Communion in Lake Geneva, each with typical Sunday attendance of a few dozen.

Neither church could afford a full-time priest, but they have shared Huddleston for the past three years as a “kind of experiment.” And while Huddleston encourages congregations across the diocese to consider applying for loans under the CARES Act, he doesn’t think he will do so for his own two congregations. The only paycheck he would need to protect is his own, and most parishioners have been reliably sending in their pledges by check.

“The question is, how long will this last?” Huddleston said.