[Episcopal News Service] Early into the coronavirus outbreak in Seattle, Washington, Adam Conley began talking with his local Jesuit and Quaker counterparts about safety protocols. Specifically, Conley worried about the Episcopal Service Corps members he oversees as director of the Seattle Service Corps. The young adults live together and serve at Seattle-area nonprofits and churches for the better part of a year — but COVID-19 had suddenly introduced new concerns.

Episcopal Service Corps is a network of young adults ages 21-32 serving through locally organized intentional communities that are dedicated to:

Applications are accepted on a rolling basis until programs reach capacity.

Episcopal Service Corps is a program for adults aged 21 to 32 years old. Those chosen annually through the corps’ application process live in an intentional community together for about 10 months. Each serves at a local nonprofit, church, or other service project — soup kitchens, schools, social justice work — while engaging in faith formation, both individually and communally. This cycle, 80 corps members are serving through 16 programs in 12 states nationwide.

Over the past month, the coronavirus outbreak has swiftly brought intentional living and in-person service into question. By the second or third week in March, Conley wondered if he could safely send Seattle corps members to their sites. Similar concerns, along with unique ones, had begun bubbling up at Episcopal Service Corps programs around the country. In Baltimore, the Rev. Jan Hamill, director of Episcopal Service Corps-Maryland, put together protocols for living together during the pandemic, as had Conley. Meanwhile, in New York City, New York Service + Justice Collaborative Executive Director Judy Douglas was making similar preparations — ensuring that there was someplace in her six corps members’ home to quarantine, as well as enough cleaning supplies and food — when one corps member began showing COVID-19 symptoms.

“He hadn’t been tested at that time, and so trying to figure out the protocols was an urgent matter for us,” Douglas said.

The program directors are spread throughout the country and oversee different cohorts serving a variety of communities; yet in this moment, they faced the same challenges. As the country shut down in earnest, Episcopal Service Committee Coordinator Wendy Johnson returned from sabbatical one week early.

“Which was perfect, because she came on and she led us all through that period of time,” said Douglas. “And we met every single day for two weeks as things rapidly unfolded,” added Hamill. On those calls, the directors have talked things over with peers uniquely positioned to listen, help and commiserate. 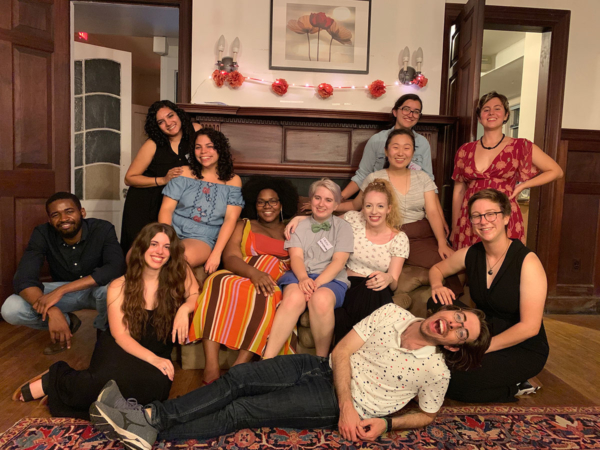 Episcopal Service Corps members with Life Together in Boston relax after hosting a dinner for alumni and friends at the start of their program year. Photo: Courtesy Kelsey Rice Bogdan

On March 20, the Diocese of Maryland decided it would be better for Maryland’s service corps members to leave their Baltimore group home. But going home isn’t necessarily a simple thing, as Kelsey Rice Bogdan, executive director at Life Together in Boston, knew well. Earlier in the COVID-19 crisis, Rice Bogdan was in discussion with the diocese there about sending the program’s fellows home. “And I said, ‘I don’t feel like we should do that, because I know that there are people in our community who would not have a place to go,” she recounted, underscoring a key consideration in this process. So the decision was made: The Boston corps members would live together, family-style, with their own new protocols. 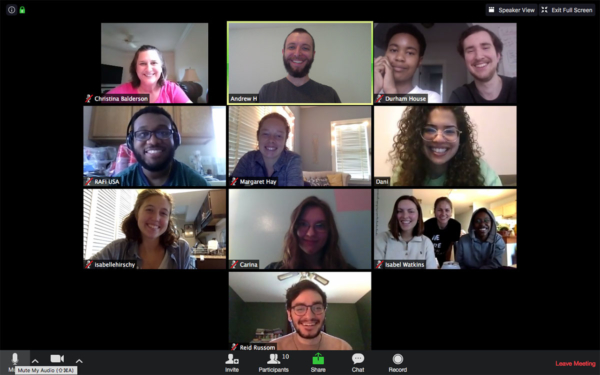 The decision for entire service corps households to stay put has been common among Episcopal Service Corps programs. It was the plan in New York City, too, but one member was away at a critical moment and couldn’t return, while another decided that it would be better to leave. At Johnson Service Corps in Chapel Hill and Durham, North Carolina, five of the 11 participants decided to leave their intentional community. 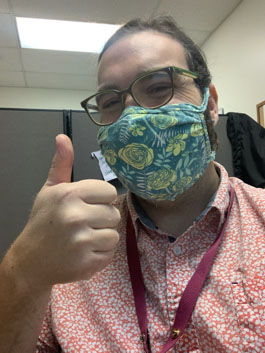 In most cases, corps members’ service has become remote, leaving some more engaged than others. Sometimes, as corps members continued doing essential work, housemates became increasingly uncomfortable with potential virus exposure, and that was discussed. At Life Together in Boston, one corps member moved in with a partner in order to continue to serve in person — a solution that worked for everyone. At Seattle Service Corps, a housemate working with the homeless community ultimately decided to stop going to her site, out of consideration for her housemates’ concerns.

At Beloved in the Desert in Tucson, Arizona, three of the five corps members continue to serve, two with a meals-on-wheels type program and one at a local food bank. Beloved in the Desert’s Executive Director Taylor Devine reflected on the choices and risks in an email.

“We see the risks, certainly, but we can’t also look away from those who are already so unseen by society who take risks every day to put food on their tables and find a roof under which to sleep,” she wrote. “It is a delicate balance, but Christianity is always a balance between living for ourselves and living for the world.”

In this changeable new status quo, the ongoing challenge for Episcopal Service Corps directors, now socially distanced from their corps members, is: “How do we bring them back into community?” Hamill said. They’re doing so in the same ways as everyone else, with a commitment to creative solutions: through spiritual formation via Zoom, shared Netflix movie screenings at 1 a.m., or virtual coffee breaks.

“They’ve had to reimagine community,” said Douglas. “We’ve done some online meditation to help them through it, and so far so good. The community’s still strong. Those that are away have dialed in.”

Nonetheless, having limited interaction with the outside world is hard. In North Carolina, Program Director Andrew Hudgins sees the thinned-out households as helpful.

“Some of the underlying tensions that have kind of gone on with different things — just typical stuff of living together — we don’t have an escalation of that,” he said. Now, Hudgins anticipates shepherding local corps members out of the snow-day mentality as the crisis continues.

At Colorado Episcopal Service Corps in Denver, Executive Director the Rev. Rebecca Crummey sees personality shaping people’s responses to the new constraints. She’s begun talking with her corps members about staying mentally healthy in the current reality, with the overarching question, “How do we not succumb to total depression, but allow ourselves the space and grace to grieve and name it being difficult?” 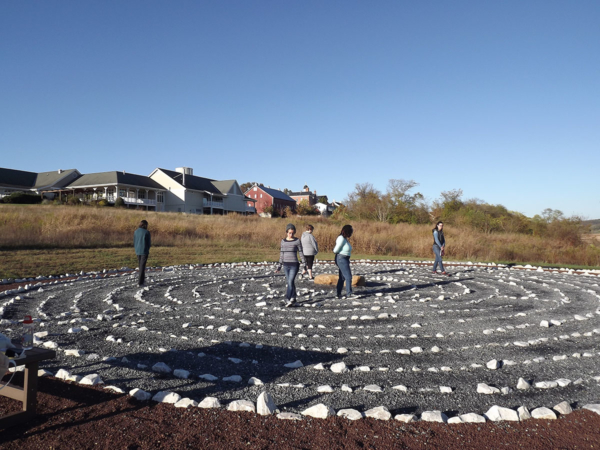 Episcopal Service Corps-Maryland members walk a labyrinth at a retreat last fall. They all left their intentional living community under the direction of the local diocese after the coronavirus pandemic spread to the United States. Photo: Jan Hamill

The challenges hint at unbidden personal and spiritual growth — and such evolution already seems underway. Hamill said that one of the Baltimore corps members, normally shy, has written prayers with The Slate Project and posted them on the organization’s Facebook page. Some are adjusting to living with their parents again, and this week, at least one has lost a family member to COVID-19. In Seattle, Conley has been watching corps members shift “from a point of kind of laughing at it and being a little cavalier — because they’re young and healthy — at the beginning of the month, to really seeing their faith base and ethical call to be safeguards for preventing that disease from passing on to someone more vulnerable,” he said.

There is another positive development emerging for Episcopal Service Corps: Corps members across the country are connecting for the first time. After Easter, they will delve into different projects together, including recording each other’s pandemic experiences and sharing them with the broader Episcopal community. “I think we’re going to see some real richness as a result of that,” said Johnson.

Johnson also noted that Episcopal Service Corps is now recruiting for its 2020-2021 program. “The work that corps members do is really important to the communities where they’re deployed, especially now, and especially in the months and years ahead as we deal with what is happening,” she said. “I think for young adults in the church who are looking for a way to respond to what they see happening in the world right now, Episcopal Service Corps provides that opportunity.”

As for the program directors she’s met with again and again over the past month, wrestling over decisions and sharing experiences: As “I watch them do their work, I can’t help but marvel at their resilience and passion for this,” Johnson says. “Cause this is really hard work.”