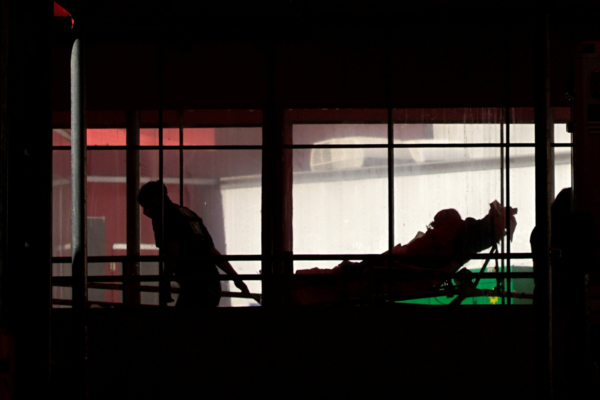 A paramedic wheels a patient into an emergency arrival area at Elmhurst Hospital in Queens, New York, on April 6. Photo: Reuters

[Episcopal News Service] One of an Episcopal priest’s most solemn duties – praying the Ministration at the Time of Death, also known as “last rites” – is particularly difficult to fulfill during the current coronavirus pandemic because hospitals have tightened access restrictions to prevent further spread of the virus.

“You can’t reach and touch someone’s hand, even through bedsheets, as they’re dying,” the Rev. Alice Downs said, “because they are alone.”

Downs, a former hospice chaplain now living in Maine, is one of 87 Episcopal priests and deacons who have volunteered to minister by phone to people dying of COVID-19, the disease caused by the coronavirus, which has infected more than a million people worldwide. The phone ministry is called “Dial-a-Priest” and was created in a matter of days by the TryTank Experimental Lab, a joint project of Virginia Theological Seminary and General Theological Seminary.

“What we’re doing is a pastoral response to a need, which is that there are people who are dying and we know we have words of comfort,” said the Rev. Lorenzo Lebrija, TryTank’s director. He began working on “Dial-a-Priest” about a week ago as an imperfect solution to an unprecedented challenge posed by the coronavirus.

The words of comfort in the Book of Common Prayer’s Ministration at the Time of Death typically are read by clergy called to the bedside of a dying person. That face-to-face scenario still is preferred, Lebrija told Episcopal News Service. With help from dioceses and parishes, he is promoting this free phone-based service to hospitals when they have no other option for connecting a patient nearing death to a priest.

“Church is about community, and this is a way we can, in these awful circumstances, still try to be one people,” he said.

Starting April 7, Lebrija has scheduled one or more of the volunteer priests and deacons to be available to receive calls from 4 a.m. to midnight EDT each day, with expanded coverage as the roster grows. The volunteers are all Episcopal clergy, but they will pray with people of any faith. The volunteers will log in to a dispatching system and wait for their phones to ring.

It remains unclear how often those phones will ring, but the potential need is great. More than 67,000 people worldwide have died so far from COVID-19, including more than 10,000 in the United States. Most cases are reported to be mild, with symptoms similar to seasonal influenza, but life-threatening conditions can develop in severe cases.

Lebrija chose the name “Dial-a-Priest” not to make light of the trauma such patients are enduring, but because it is an easy phrase to remember. A dying patient, or the patient’s doctor or nurse, can call 213-423-3600 to be connected, and the number also can easily be found and dialed with a single click from DialAPriest.com.

An automated message will let the caller know that a clergy member will be on the line shortly. Lebrija hopes to offer callers a Spanish option, when he recruits more Spanish-speaking volunteers. TryTank’s calling system will ring all of the priests and deacons who are currently logged in, and the first one to answer will be connected with the person who is nearing death.

The priest then will begin the prayers: “Almighty God, look on this your servant, lying in great weakness, and comfort him with the promise of life everlasting, given in the resurrection of your Son Jesus Christ our Lord.”

Downs, the Maine priest, repeated those words many times in the 1980s. She worked for several years with the Momentum Project, providing pastoral end-of-life care to dying AIDS patients in the New York area. In her later work as a hospice chaplain, she again repeated the prayers at the time of death for elderly patients in central New Jersey, where she also served as a parish priest.

In the coronavirus pandemic, “what’s different about this is how alone people are,” Downs said in an interview with ENS. With the virus spreading rapidly across the United States in the past month, social distancing policies across the country aim to limit further infections so hospitals are not overwhelmed. Even close relatives may not be allowed to visit and say goodbye to those who are dying from the disease.

Downs heard from a fellow priest who is connected to Virginia Theological Seminary about this new TryTank initiative. TryTank’s experiments seek to reinvigorate The Episcopal Church through new approaches to ongoing challenges. She let Lebrija know she can be available for calls from 8 to 10 a.m. every Monday through Friday from her home in Southwest Harbor.

“I think one of the most beautiful things The Episcopal Church has is the [Book of Common Prayer’s] words at the time of death and immediately afterwards,” she said, “and just to be able to say those, should I be called on in this ministry, at least helps me believe we are still all one people.”