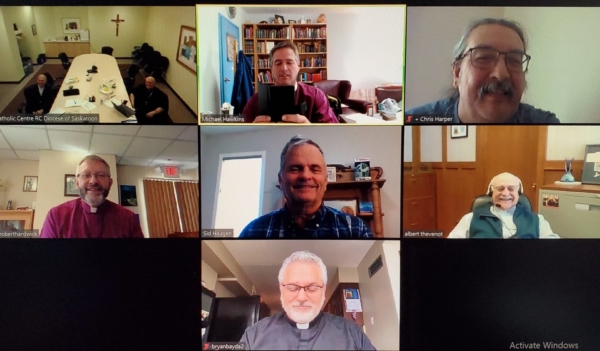 Leaders of four denominational regions met by videoconference in March to approve the agreement.

[Anglican Journal] Anglicans, Lutherans, Roman Catholics and Ukrainian Catholics across the Canadian province of Saskatchewan can expect to be worshipping and ministering together in a wide range of new ways after the recent signing of an ecumenical covenant.

The LAURC Covenant, signed by the heads of 10 dioceses and other church bodies of these four denominations in Saskatchewan and released April 2, pledges them to shared life together under five broad headings: prayer, study, action, social life and ecumenical leadership. They commit to six practices, including an annual “service of reconciliation” with participants from all churches; joint justice-related initiatives; and meetings with indigenous elders and communities aimed at responding to the 94 calls to action of the Truth and Reconciliation Commission. The agreement also encourages churches to consider a list of 23 other ways they might cooperate, ranging from shared services to clergy swaps, prison ministry, chaplaincy and evangelism.