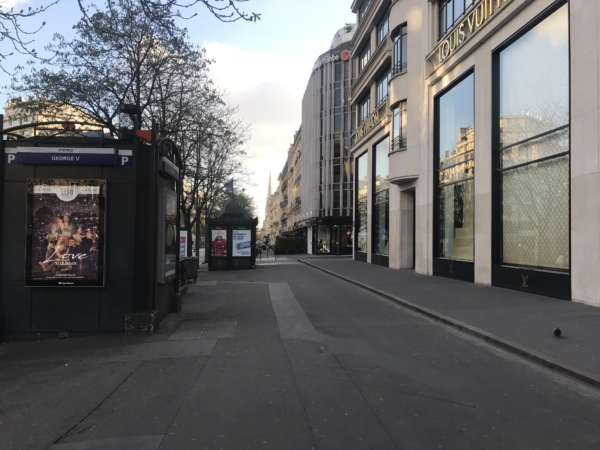 The usually bustling streets of central Paris, France, are deserted due to the strict lockdown imposed by the government. Photo: Lucinda Laird

[Episcopal News Service] Looking at the devastating toll the COVID-19 pandemic is taking on Western Europe, many analysts see a preview of what’s in store for the United States. As of April 2, Western Europe had twice as many COVID-19 cases as the United States and seven times as many deaths, but the pandemic’s trajectory in the U.S. is one to two weeks behind, and the number of confirmed cases is growing faster here.

A near-total lockdown has brought much of Europe to a standstill, and that extends to the churches that comprise an often-overlooked branch of The Episcopal Church: the Convocation of Episcopal Churches in Europe. Made up of nine parishes and 12 missions across seven countries, the convocation’s churches are used to being separated from each other, but not from their own parishioners.

“They live in a world that’s very different from the world The Episcopal Church arose in and sort of takes for granted. They’re very spread out from each other. We cover the ground from Paris to Tbilisi in Georgia,” the Rt. Rev. Mark Edington, bishop of the convocation, told Episcopal News Service.

The priests Edington oversees “have already chosen to willingly go into a part of the church that’s very much on the frontier, on the geographic fringe. It’s living in a culture that is years ahead [of the U.S.] in terms of secularization and multiethnic cultures. They are brave, inventive, creative people, and they are naturally organized around being helpers and community builders, and they’re being locked behind their doors. And it’s really hard.”

Edington is experiencing the pain of being separated from his congregations not by a lockdown but by the Atlantic Ocean. Edington, who has served as the convocation’s bishop for a year, was visiting his American “home base” in Massachusetts when he found himself unable to return to Europe because of the travel restrictions enacted by the United States on March 13. 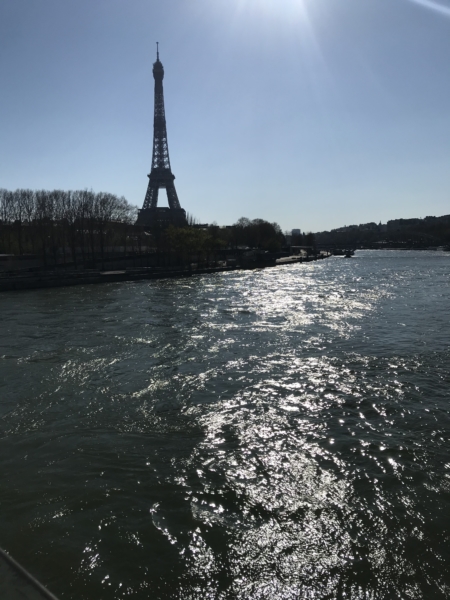 The Seine River in Paris, normally crowded with sightseers on the banks and in boats, is empty. Photo: Lucinda Laird

“Personally, it’s been very hard because I feel deeply the distance from my people,” Edington told ENS. “I also recognize that, from a practical point of view, I’m able to do more here than I could in Paris. Because at least I can work and move, and in Paris, I would be absolutely locked down in an apartment. Getting back and forth to the cathedral would require a permission slip.”

Being stuck in the U.S. means Edington is focusing more on his capacity as a sort of ambassador from the convocation to the rest of The Episcopal Church.

“An important part of my ministry is to explain back to the larger church, Why do we have a church in Europe? What does it do? What does it offer our larger church? Who are these people?” Edington said. “The thing I’m able to do now, by the accident of being here, is to be deeply engaged with my colleagues in the leadership of the church … to support the work of the convocation.”

And who are “these people”? They’re resourceful, innovative Episcopalians who always find ways to create robust communities despite their isolation from the rest of the church, Edington said.

“People in our parishes are largely expatriates. They are not, for the most part, Americans; they’re expatriates from all over the world – from the Anglican world, especially. So they’re pretty plucky. They’re pretty resilient people already,” Edington told ENS. “The thing I am most humbled by, amazed by, is the inventiveness, the creativity, the determination of the congregations of the convocation.”

The lockdowns in many European countries are far more stringent than the restrictions currently in place in some parts of the U.S. In Italy and France, for example, no one can leave their homes except for a few approved purposes, like essential work, grocery shopping and medical care, and if they are not carrying a form stating that purpose, they can be stopped by the police and fined.

And cultural attitudes toward religion make European Episcopalians’ experiences very different from Americans’ to begin with. While religion remains prevalent in American public and political life and freedom of religion is enshrined in U.S. law, some European countries – France, in particular – have strict legal restrictions on religious expression.

“The relationship of the church to the authority of the state is very different in Europe,” Edington said. “If they want to shut us down, they can, and that’s the frightening thing.”

In-person worship services and gatherings at all the convocation’s churches have been canceled. Many have moved their worship online, but the closures have taken a toll on the various ministries the churches support. The Joel Nafuma Refugee Center at St. Paul’s Within the Walls Episcopal Church in Rome is “the one that hurts us the most to close,” Edington said.

A “very close second” is the meal ministry to homeless people and refugees in Paris. And then there are the meetings of Alcoholics Anonymous and other recovery groups.

“In Europe, we’re often the only place in town where there’s an English-speaking AA meeting,” Edington said. “It is hurting people that they have nowhere to meet.”

The Very Rev. Lucinda Laird, dean of the American Cathedral of the Holy Trinity in central Paris, lives at the cathedral complex and is hunkering down there with three other people: a youth intern and two interim assistants who are a married couple from the U.S. The four of them are running livestream services and taking care of the property. 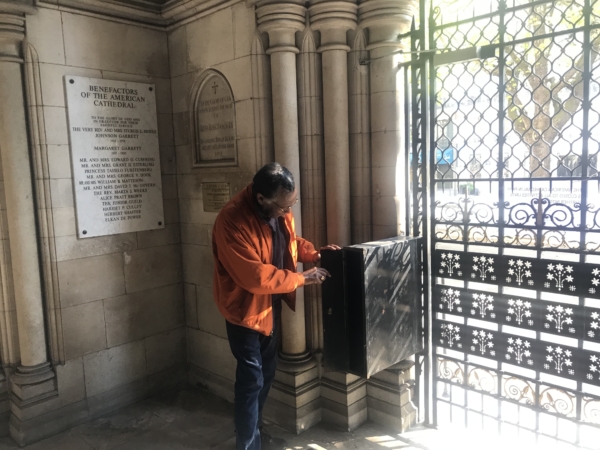 “I couldn’t have been luckier in terms of people here,” Laird told ENS. “It’s quite the little community, and we’re really lucky because we have space. … We think of ourselves as a family that’s living together.” 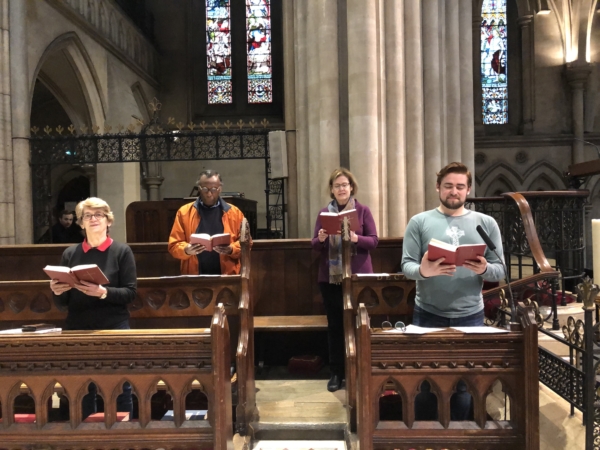 The residents of the American Cathedral in Paris (from left, the Rev. Canon Linda Grenz, Delbert Glover, the Very Rev. Lucinda Laird and Cian Grourke) celebrate Morning Prayer, which they livestream on Facebook six days a week. Photo: Lucinda Laird

Laird has been trying to take advantage of the few opportunities she has to leave the building. She is allowed to go out for one hour for an approved reason like grocery shopping or exercise, but cannot travel more than about half a mile and must carry identification and the government form, which police will demand to see.

“It’s incredibly quiet. I hear birds, which you don’t think about in Paris,” Laird said. “And the Seine is absolutely deserted.”

Laird has been contacting parishioners by email and Zoom (including leading a Zoom Bible study), and she and the vestry are setting up a phone tree to call everyone in the directory. The cathedral’s pastoral care committee has a list of elderly and homebound parishioners, who are being contacted. As of March 30, Laird had not heard of any parishioners having COVID-19, although many of their friends and relatives have been infected and some have died. 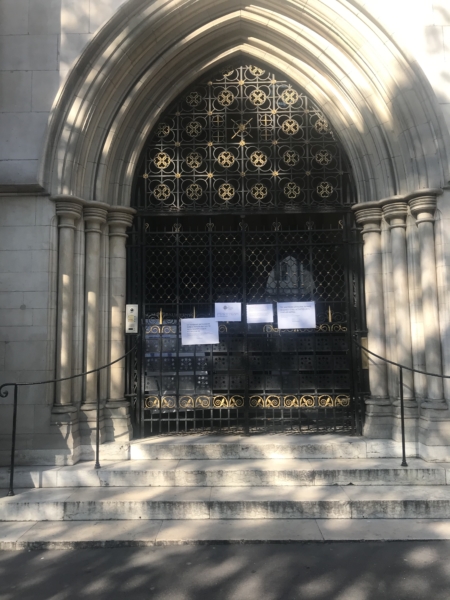 Signs in multiple languages announcing the closure of the American Cathedral in Paris are posted on the cathedral doors. Photo: Lucinda Laird

Mostly, her parishioners are managing well, Laird said. The ones who aren’t able to get the groceries they need are having them delivered.

“It’s more [that they’re] wanting to talk,” Laird said. “There haven’t been, really, any emergencies. … A lot of people are going crazy – shut in and depressed and worried, and maybe they’ve lost their job.”

Laird feels fortunate to be in France – not in spite of the strict lockdown measures but because of them.

“They were pretty good in France about shutting down pretty quickly, and people [are complying],” she said. “They won’t do that in the States. … I’m really happy to be in Europe, truthfully. I think it’s, in a way, safer right now because they’re much more clear about the lockdown. 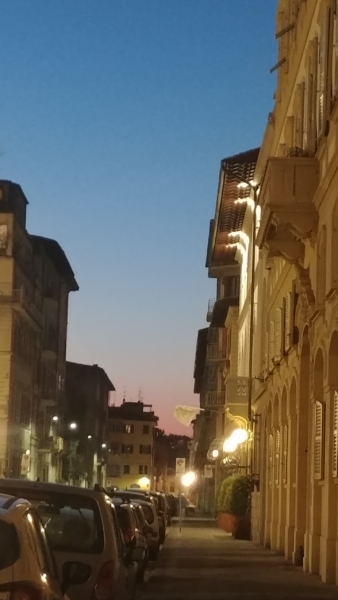 The sun sets on an empty street in Florence, Italy. Photo: Monica Sharp

“On the other hand, they are such a secular society. They are totally uninterested in anything the church wants to do,” she added. While clergy are considered essential workers in some other places, they are not in France.

The lockdown has been going on even longer in Italy, home to five of the convocation’s churches. Monica Sharp is the clerk of the vestry at St. James Episcopal Church in Florence, where she has lived since 2016 with her husband and two children, ages five and eight. Because her husband is the director of a university study-abroad program, “we were aware [of the danger] very early on because of the risk management issue for all the study-abroad students,” who were sent home on Feb. 24, she told ENS.

“As early as Feb. 14, that weekend, he knew it was coming. … We had a very long lead on this news, to the extent that I felt like Italians weren’t taking me seriously at all. Other expats in town felt like I was exaggerating.”

Urging her friends to cancel their social and engagements and prepare for the outbreak, she pointed to the situation that was then unfolding in China and heading their way.

As of April 2, almost 14,000 deaths from the virus have been recorded in Italy, which is second to the U.S. in terms of documented infections.

“I know people in Italy and in the U.S. who have contracted the virus,” she told ENS. “I have friends of friends who have died. I feel like it’s always nipping at our heels.” 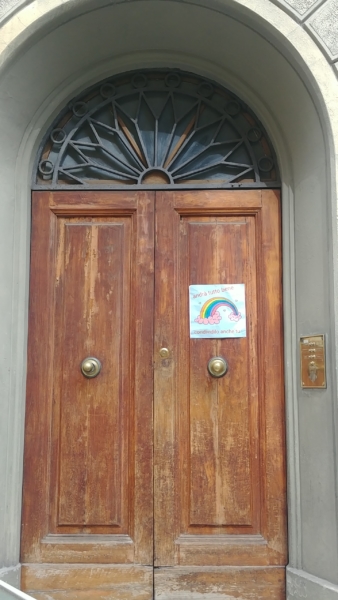 Children in Florence have decorated their front doors with homemade signs like this one, which reads, “Everything will be all right” in Italian. Photo: Monica Sharp

Relatives and friends of some parishioners at St. James have COVID-19, Sharp said. As many other church leaders are doing, Sharp and her fellow vestry members are checking in via phone calls and text messages, especially with people who aren’t doing well, and occasionally delivering groceries to those with health conditions that make them vulnerable to the virus. On top of that, she’s helping record services at St. James.

Still, life goes on for Sharp and her family. Her children have been home from school for a month, and she expects the lockdown will continue in some form for “months and months to come.”

“I’ve had days where I had abject anxiety, and this week seems to be better. I don’t know why. I’m settling into it. Just you know, keeping the household going, keeping the kids going and doing for ourselves what we need here. You know, trying to just maintain our routine and our stability as best we can.”

Editor’s note: An earlier version of this story mistakenly said that some of St. James’ parishioners have COVID-19; that has not been confirmed.