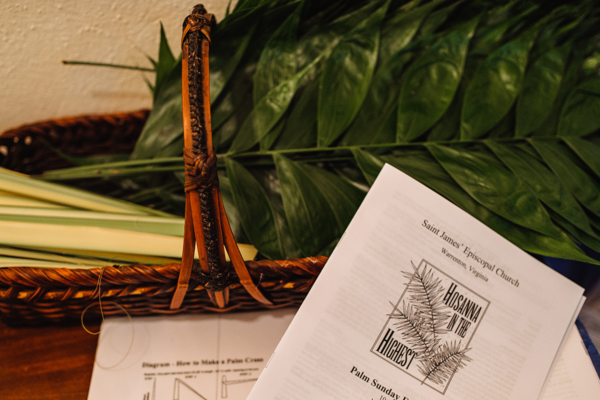 [Episcopal News Service] The shipment of palms arrived right on time for Palm Sunday, and that was the problem. There hadn’t been time to cancel the order.

The COVID-19 pandemic suddenly was forcing the Rev. Stephanie Moncrieff to scramble her plans for Holy Week at Trinity Episcopal Church in Waterloo, Iowa. Episcopal congregations everywhere typically distribute palms to parishioners processing into churches to recreate Jesus’ triumphal entry into Jerusalem, but there will be no procession into Trinity this Palm Sunday.

Across the country, widespread suspensions of in-person worship are intended to help slow the rapid spread of the new coronavirus, now diagnosed in more than 240,000 Americans, according to New York Times reporting. More than 6,000 of those have died. In Iowa, where the number of cases has topped 600, Moncrieff said she was mindful of her parishioners’ safety as she prepared an abbreviated Palm Sunday service for April 5. 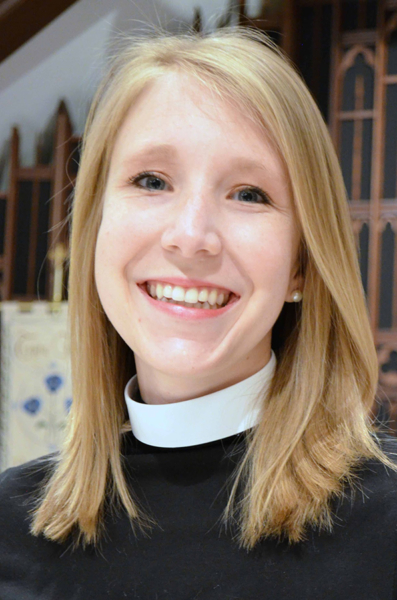 The Rev. Stephanie Moncrieff is priest-in-charge at Trinity Episcopal Church in Waterloo, Iowa.

With the church off-limits for in-person worship, Montcrieff will lead the Liturgy of the Palms in Trinity’s parking lot. Parishioners may attend the service in their cars, with windows rolled up, and it will be broadcast by teleconference. The priest’s garb will include face mask and plastic gloves as she distributes the palms – but only after dipping them in a bleach solution. Folded into crosses, they will be taped to the windows of the cars, which then will form a procession on wheels through Waterloo.

“For me, I think it’s a public witness of hope,” Moncrieff said in an interview with Episcopal News Service. “And if we can do it in a safe way that is respectful of physical distancing, I’d like to give it a shot.”

As Episcopalians prepare to celebrate some of the holiest days on the Christian calendar, they enter Holy Week still adjusting to unprecedented disruptions to normal liturgical practices. Public gatherings threaten to accelerate transmission of COVID-19, so a Lenten fast from in-person worship “is generally the most prudent course of action at this time, even during Holy Week and on Easter Day,” Presiding Bishop Michael Curry said in a March 17 letter to the church.

Virtual services are proliferating online for Episcopalians who now are mostly confined to their homes, but many congregations also are finding ways to incorporate the traditional physical elements of worship into their Holy Week schedules – including palms for Palm Sunday.

“We are people of physical signs and symbols, and those mean a lot to folks,” said the Rev. Rosalind Hughes, rector at the Church of the Epiphany in Euclid, Ohio.

Trinity and Epiphany are both small congregations, each averaging about 50 in-person worshippers on Sundays. Like Moncrieff, Hughes might have canceled her order of palms, but they already were on their way when COVID-19 upended in-person worship plans for Palm Sunday. Hughes chose to mail palms with printed bulletins to parishioners who don’t have access to the bulletins online. She is encouraging other parishioners to pick “any piece of greenery” at their own homes and bring it to Epiphany’s online service April 5.

This isn’t how anyone expected to celebrate Palm Sunday, but it may offer a novel way to “reconnect with that original procession into Jerusalem,” Hughes told ENS by phone. “People were using what they had at hand to worship Jesus as he approached.”

Palms still are preferred at congregations across The Episcopal Church, and church leaders are finding ways of getting them into the hands of parishioners while promoting public health precautions, like minimizing person-to-person contact and limiting trips outside the home.

Church of the Good Shepherd in Greer, South Carolina, posted on Facebook that its palms will be available for pickup at the church starting midday Friday, “so you can wave them during Father Mike (Schnatterly)’s recorded service on Sunday.” Other churches are making similar arrangements. The Rev. David Kendrick, rector at St. John’s Episcopal Church in Springfield, Missouri, told ENS he would bless the palms and leave them in a bucket outside the church for parishioners to pick up.

Our gates are open for you to take a palm for Palm Sunday! They will be out from 8-5 today, tomorrow, and Saturday as long as they are available.

In Maquoketa, Iowa, palms will be available next to the sign outside St. Mark’s Episcopal Church, for people driving by to stop and take one on Palm Sunday morning. “Any palms left will be gathered up early evening and those will be the starter palms for the ashes on Ash Wednesday 2021,” the Diocese of Iowa said, referring to a common practice for unused palms.

The Rev. Anne Schnaare, rector at Trinity Episcopal Church in Marshall, Michigan, said she, too, has left unblessed palms out for parishioners to pick up on the back porch of the church. “We’re trying to restrict contact as much as humanly possible,” she told ENS, and parishioners should pick up the palms while they’re already out on other essential errands, rather than leaving home just for the palms.

It took a bit longer than normal to receive Trinity’s shipment of palms because the delivery person couldn’t find someone at Trinity to accept the package. The church, like most, is temporarily closed. Schnaare was able to get the package shipped to her house instead, and she posted a video to YouTube of her and her 10-year-old daughter, Phoebe, opening the box to reveal the palms.

“I certainly don’t need 200 of them,” she said in the video, inviting parishioners to pick up theirs at the church. “I hope you will enjoy using them on Palm Sunday.”

At the Church of the Good Shepherd in Federal Way, Washington, just north of Tacoma, the Rev. Josh Hosler, Good Shepherd’s rector, chose to forego palms altogether this year. Like Hughes, he encouraged parishioners to pick their own greenery to bring to the Zoom video conference call when the congregation celebrates Palm Sunday online.

“We don’t have palm trees in the Pacific Northwest. But we do have plenty of evergreens and ferns,” Hosler told ENS by email. Another option is to draw palms on paper, color them and cut them out. (Or print this one.)

“The idea is to keep our Palm Sunday worship as interactive as possible, even from a distance,” he said. “As we sing ‘All Glory, Laud and Honor,’ we can wave our branches in front of our many cameras.”

The use of greenery other than palms on Palm Sunday isn’t unorthodox. In fact, it’s specifically endorsed by the Book of Common Prayer. The Liturgy of the Palms says “branches of palm or other trees or shrubs” may be carried by worshippers who process into the church.

There also are historical precedents for substituting local bits of flora for palms, according to the Rev. Ruth Meyers, liturgy professor and dean of academic affairs at Church Divinity School of the Pacific in Berkeley, California.

“That goes back to the Middle Ages, as palm processions spread around Europe,” Meyers said in an interview with ENS. “There are plenty of countries where access to palms was just not conceivable.” 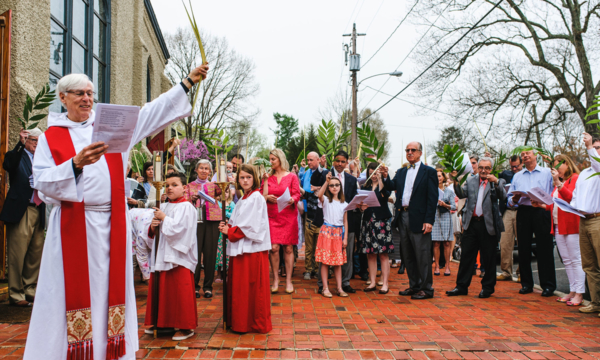 Saint James’ Episcopal Church in Warrenton, Virginia, celebrates Palm Sunday in 2019. This year, the congregation is distributing the lectionary by mail and online and inviting the congregation to follow along remotely because in-person worship has been suspended. Photo: Saint James’

California has been under a “shelter in place” order since March 19, and CDSP moved its classes online even earlier, starting March 10, as the coronavirus outbreak on the West Coast was escalating.

Meyers, who served as chair of the Episcopal Church’s Standing Commission on Liturgy and Music from 2009 to 2015, is adjusting to online instruction in her course this semester. As for Holy Week, congregations face the challenge of gathering online for liturgies that normally are full of physical objects, she said.

Such ritual objects help worshippers engage with the story of Jesus’ death and resurrection, Meyers said. In a year when social distancing has changed so much about Holy Week observances, she thinks it’s natural for Episcopalians to yearn for actual palms as they participate in Palm Sunday worship at home. “It won’t have the fullness that we would want it to have,” she said, “so the palms themselves as an object can be meaningful for people.”

Moncrieff, the Iowa priest, grew up in Texas with a palm tree in her backyard, but at Trinity, “we’re surrounded by corn.” A palm isn’t something familiar to her congregation, except on this one Sunday each year.

She considered asking parishioners to go into their backyards and cut branches, but seasonal considerations defeated that plan. “Here in Iowa, we don’t have leaves on the trees,” she said. “That’s not necessarily our context.”

Moncrieff developed her plan for a parking lot Palm Sunday service with input from her most trusted medical adviser, her husband, who is a family practice doctor in Waterloo. After taping the sanitized palms to worshippers’ windows, they will drive down Kindle Avenue, a main thoroughfare in Waterloo, and then loop back and return to the church, where they will be dismissed.

That is the plan, at least.

“There’s always the plan,” she said, “and we’ll see how the Holy Spirit takes it.”