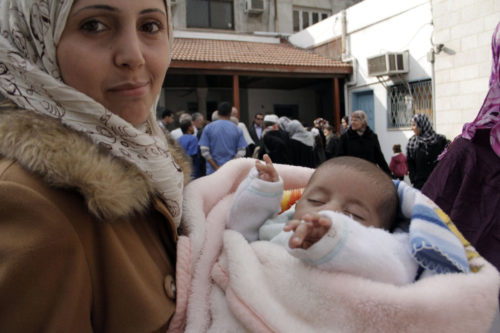 A Muslim woman and her infant waiting for a checkup at Al Ahli Arab Hospital in Gaza City on Jan. 2, 2013. The hospital runs a three-month program for undernourished children. ENS Photo/Lynette Wilson

[Episcopal News Service] Episcopalians in congregations across The Episcopal Church give hundreds of thousands of dollars each year to support ministries in the Middle East through the church’s annual Good Friday Offering.

Unfortunately, Good Friday will look a lot different this year. Social distancing to slow the spread of COVID-19 means in-person worship won’t be an option April 10. Instead, Episcopalians will gather online and worship in their homes on Good Friday to remember Jesus’ death on the cross. Offering plates will remain unused at the 1,500 or so congregations that typically participate in the Good Friday Offering each year.

Contributing to the Good Friday Offering, however, will still be possible this year, as The Episcopal Church has launched an online donation page – the first time such an option will be available to Episcopalians who are inspired to support the important work of Anglican churches in the Middle East.

“Things have changed so much about worship on Good Friday,” said the Rev. Bob Edmunds, The Episcopal Church’s Middle East partnership officer. The church’s Development Office created this online offering page, he said, to allow Episcopalians to continue to contribute – if they are able and wish to do so.

The money is given to the Province of Jerusalem and the Middle East and its dioceses to address “the most pressing needs that they find,” Edmunds said in an interview with ENS.

And like the United States and other countries where The Episcopal Church has dioceses, the Middle East is struggling with the unique challenges posed by the growing coronavirus pandemic. The financing of Anglican ministries there also has been “hit hard because our people are not able to congregate and give their own offerings,” Archbishop Michael Lewis, primate of the province, told ENS in an email.

“The Good Friday Offering is something that this Province of Jerusalem and the Middle East, as a whole, and individual dioceses within it, have always hugely valued. For us it’s a lifeline,” said Lewis, who also serves as bishop of the Diocese of Cyprus and the Gulf. In his diocese, “we have such extremes of situation and such a wide variety of congregations, almost all highly mixed, many including worshippers without much money or influence, and all in a real sense fragile because of political uncertainties and the vagaries of employment, let alone the present health pandemic.”

The Good Friday Offering, an initiative of the presiding bishop’s office, dates to 1922, when it was created in the aftermath of World War I in an attempt to foster relationships with Christians in the Middle East by supporting relief work and ecumenical partnerships.

The Episcopal Church’s General Convention regularly considers resolutions related to Middle East issues. Resolutions that take positions on the Israeli-Palestinian conflict typically generate the most debate, though the church has backed other measures as well, affirming financial support for peacemaking efforts and humanitarian ministries.

The variety of programs and ministries that the Good Friday Offering has supported in the past has included conferences and summer camps for children, women’s empowerment programs, an eye clinic and other medical ministries.

The Diocese of Jerusalem, for example, operates two charitable hospitals, Al Ahli Arab Hospital in Gaza and St. Luke’s in the West Bank city of Nablus. The diocese also runs the Holy Land Institute for the Deaf in Jordan. The Princess Basma Centre for Disabled Children in East Jerusalem, in addition to providing medical care, offers a program to support mothers of children with newly diagnosed disabilities. And in the Diocese of Cyprus and the Gulf, The Episcopal Church has partnered with Iraqis on local ministries, such as an economic development program aimed at supporting chicken farmers.

Episcopal congregations, though not collecting the offering in person this year, are still invited to promote the Good Friday Offering to their parishioners.

“The Good Friday Offering provides hope and opportunity for students, patients, needy families and more in the Province of Jerusalem and the Middle East,” Presiding Bishop Michael Curry said in a letter to congregations earlier this year. “We do make a difference. This is important. I have witnessed this Jesus-inspired compassion and commitment at work with my own eyes.”

In addition to the online donation page, Episcopalians can text their donations by sending “GFO” to 91999.

“I think the spiritual connection that we have with the Christians who maintain our faith on our behalf in the Middle East is very real,” Edmunds said.

“When you travel to the Holy Land and you visit the places that Jesus walked and talked and taught and healed, that’s a powerful spiritual benefit to all Christian people,” he said, adding that supporting Christian ministries in the Middle East is a way to show “a great solidarity” with those who carry out that work.