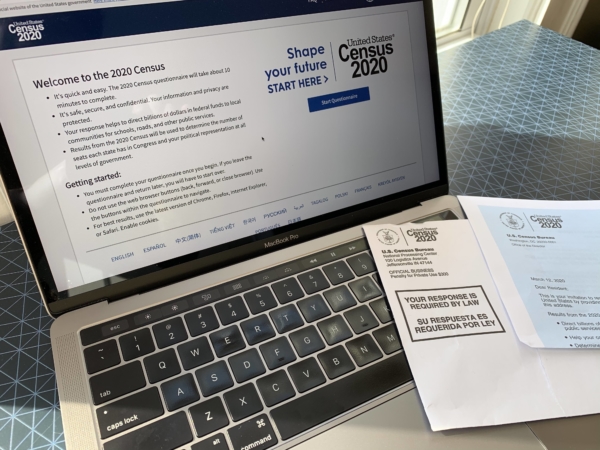 The 2020 U.S. census can be completed online, by mail or by phone. Photo: Egan Millard/Episcopal News Service

[Episcopal News Service] The COVID-19 pandemic has disrupted so many elements of society so quickly that it’s almost impossible to keep track. And while the world’s attention is focused on the immediate medical and economic crises, leaders from the United States government and The Episcopal Church are reminding Americans that, without even leaving their homes, they can ensure the success of a critically important operation: the 2020 U.S. census.

The timing of the once-a-decade count of all Americans – documenting where they live as of April 1 – is extraordinarily unfortunate, but it is even more important in light of the pandemic. The census affects Americans’ daily lives in many direct and indirect ways, particularly through the distribution of congressional seats and funding for 132 federal programs. The Episcopal Church is an official partner of the census and is urging all Americans to submit the data for their household, which is required by law.

Watch Presiding Bishop Michael Curry’s message on the importance of the 2020 census:

Census participation is one of the many projects that the church’s Washington, D.C.-based Office of Government Relations is working on. Since early March, the office has produced a weekly series on how the census impacts various facets of American life. Census data is used in the distribution of hundreds of billions of dollars in federal funding for health services like Medicare and Medicaid; educational programs like public school grants, free or low-cost school lunches and college loans; and social safety net programs like food stamps and rent vouchers. The final installment will be released on April 1 – Census Day.

By now, every home in the United States should have received a letter in the mail with instructions on how to respond to the census, which takes a few minutes and asks about the number of people in the home and some basic demographic information. There are no questions about citizenship, and the Census Bureau is legally prohibited from releasing any identifiable information, even to law enforcement agencies.

This year, for the first time, anyone can complete the census online, by phone or by mail. If a household does not respond, a census worker will have to come to the home to collect the information in person.

The Office of Government Relations wants to get the message out to all Episcopalians that the census is still happening despite the pandemic (with some minor operational changes) and that their participation will make a difference in their lives and the lives of their neighbors. The church’s involvement stems from the fact that the census is a nonpartisan way for Episcopalians to participate in public life that particularly benefits vulnerable people, and research has shown that people are more likely to participate in the census if they hear about it from someone they trust. To that end, the Office of Government Relations offers a census engagement toolkit to help churches get the word out.

“The Episcopal Church, and other religious denominations, through the ministries we lead in our communities are well situated to reach historically hard-to-count populations, a critical goal of the Census Bureau,” the office wrote in the first installment of its census engagement series. “Taking the census ourselves and helping others take the census is not just a selfish act but an act that can help our elderly neighbors get the services they need. It helps our children benefit from free or reduced lunch programs and access to funding opportunities for education. It ensures all of us can get representation in Congress we deserve.”

The Office of Government Relations had previously encouraged congregations to use their physical resources to boost participation by, for example, setting up computers in a parish hall and having volunteers help people fill out the census online. The COVID-19 pandemic has upended those plans, but the engagement efforts are continuing in different forms, according to church relations officer Alan Yarborough.

“We can use the church’s creative assistance to help spread the word about the 2020 census,” Yarborough told Episcopal News Service. “As we temporarily shift many church activities to online platforms, we recognize that in-person marketing, hosting a census forum, or creating a computer lab for the public to take the census, may not be possible. But this does not mean we cannot continue to assist the Census Bureau in getting an accurate count by advertising it in virtual services or spreading the word through outreach ministries that are still operational.”