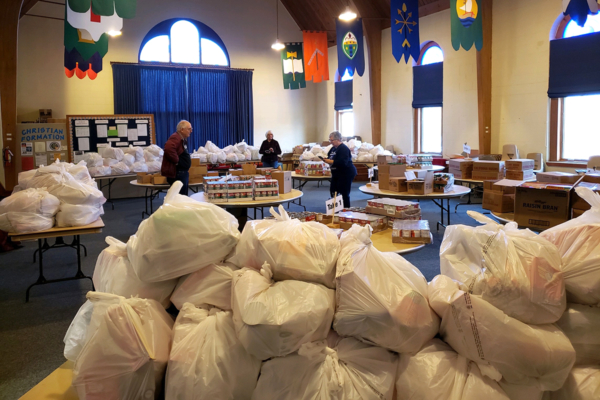 Bags of food are piled ready for distribution at St. Jude’s Episcopal Church in Fenton, Michigan, where a spring break meal ministry served about 400 students on March 28. Photo: St. Jude’s

[Episcopal News Service] Spring break is a big deal at St. Jude’s Episcopal Church. Each year for more than a decade, the congregation in Fenton, Michigan, has organized a food distribution ministry on the first Saturday of the break, offering a week’s worth of free food to hundreds of families who rely on free and reduced-cost school lunches to help keep their children fed while school is in session.

Those students have never experienced a spring break like this one, with the threat of the COVID-19 pandemic disrupting both instruction and vacation, but on March 28, St. Jude’s served up its spring break lunch program as promised – with a healthy helping of social distancing to go with its bags of food.

“Normally, we set the church hall up like a grocery store, if you will,” outreach coordinator Dave Rayner told Episcopal News Service by phone. This year, all the food was bagged in advance by church volunteers, and the bags were distributed, one family at a time, to about 400 students in three area school districts.

This is the 12th year that Rayner, 67, and his wife, Denise Rayner, have led the team of St. Jude’s volunteers in this feeding ministry in Fenton, a city of 11,000 about 20 minutes south of Flint and about an hour northwest of downtown Detroit.

They usually start in January purchasing nonperishable food items at steeply discounted prices from the Food Bank of Eastern Michigan, of which St. Jude’s is a member agency. The U.S. Department of Agriculture is another source of inexpensive food. It is all stored in a basement room at the church.

St. Jude’s then coordinates with the three school districts to inform families that food will be available at the church at the start of spring break. Since the congregation can’t contact the families directly, the districts distribute invitation letters on behalf of St. Jude’s. This year, nearly 1,800 letters went out, inviting about 4,000 students.

Then the coronavirus outbreak hit. Cases across the United States grew exponentially in March, now topping 150,000. More than 5,000 of those cases were reported in Michigan, particularly in Detroit, and at least 158 have died in the state, according to The New York Times.

School closings are widespread in the country, as public officials advocate social distancing precautions to slow the spread of the virus. Michigan Gov. Gretchen Whitmer ordered all schools in the state to suspend in-person instruction at least through April 13, and it’s “very unlikely” they will return to classes this school year, she said March 27.

School districts in Fenton have continued to offer lunches to students who qualify for free or reduced-cost lunches through bagged meal distribution outside schools on school days. To bridge the gap during spring break, St. Jude’s adjusted its ministry to follow public health guidelines.

Because large public gatherings can accelerate transmission of the virus, the four Episcopal dioceses in Michigan have suspended in-person worship services, and smaller gatherings also risk spreading the virus. In the past, 20 to 25 volunteers would gather at St. Jude’s to sort the food for distribution, Rayner said, but “this year with the social distancing guidelines, you couldn’t do that all at once.”

Instead, he broke the work into shifts with smaller groups, and unless the volunteers were in the same family, they were required to work at least 6 feet apart, as recommended by health experts. The volunteers, one at a time, moved the food from the storage room to tables in the parish hall, where they were each assigned to a table to assemble bags of food, while wearing rubber gloves.

Because of the multiple shifts, “It took two or three days to do all of that,” Rayner said.

On distribution day, a rainy March 28, Rayner again kept his groups of volunteers small. The five people in charge of setup installed canopy tents and patio umbrellas outside a side door of the church to incorporate 6-foot distancing into the queueing system for families who would be picking up food. A table was placed just inside the door, and bags for the families were placed there for pickup. 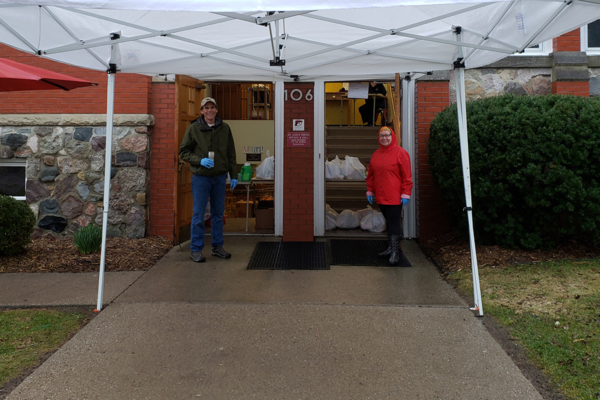 The congregation also took requests for food delivery, and two drivers brought bags to those families at home and left them outside their doors.

No verification was required, Rayner said. “Our view has been for several years now: If you need food, you get food,” he said.

Rayner said the families who picked up food followed the social distancing recommendations without complaint, and they seemed upbeat and thankful. In the face of a growing public health crisis, he feels the community coming together to support each other.

“Despite the fact that we’re in pretty crummy times, everybody everywhere wants to help,” he said.

That help went beyond the church volunteers who turned out for the March 28 food distribution. A local bakery and restaurant, Crust, had to close to all but takeout and delivery orders, but it offered 100 loaves of bread for the spring break meal program at St. Jude’s. It also allowed St. Jude’s to store cartons of eggs in an unused cooler at the restaurant.

Rayner also received a last-minute donation from Oakland University. The assistant athletic director called him and offered 350 cartons of chocolate milk, which had been purchased for a swim meet that later was canceled.

Now, St. Jude’s is building on its annual spring break ministry and will begin April 4 with a weekly distribution of smaller bags of food: a can of soup, a box of cereal, granola bars – enough to get the students through the weekends, while the schools continue to distribute lunches on weekdays.